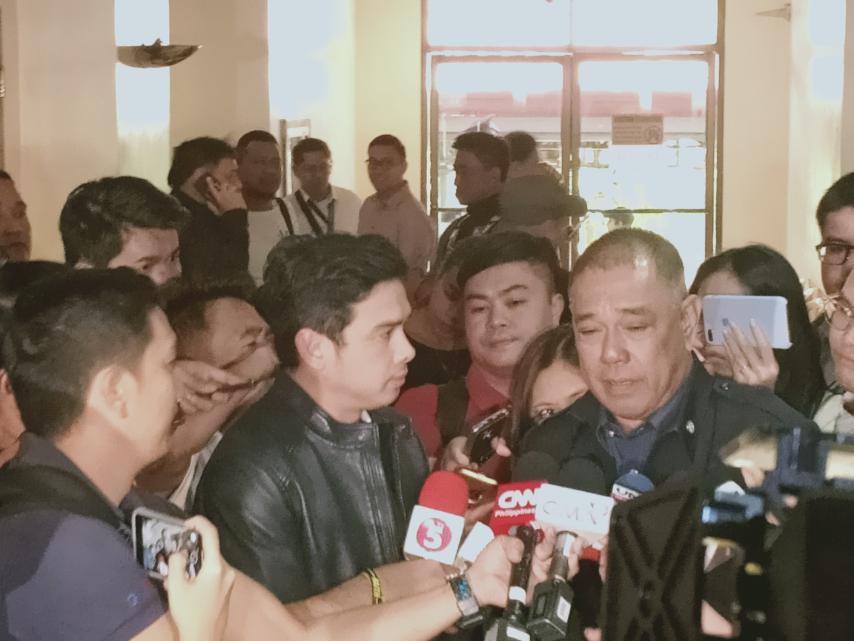 Angkas Chief Transport Advocate George Royeca and TWG Chair Antonio Gardiola Jr. during the press conference after the agreement has been settled between DOtr, TWG and DOTr, TWG, and the motorcycle taxi companies Photo by THEPHILBIZNEWS

After taking an adamant position during the Senate hearing on motorcycle taxis, Angkas is back on the road.

Thanks to the House Transportation Committee Chairman Congressman Edgar Sarmiento (Samar), who led the executive session with the committee members, the government regulators, and the three motorcycle taxi companies.

After the executive session, Rep. Sarmiento announced that an agreement has been reached between the DOTr, TWG, and the motorcycle taxi companies participating in the pilot run to continue the test run until March this year.

“We are very grateful to Sec. Tugade and Rep. Sarmiento for mediating for the impasse settlement. I am happy that everyone is now involved in the test run and will be working together towards the same goal,” Angkas Chief Transport Advocate George Royeca said.

“The agreement to continue the test run that Angkas and the two other players struck with the DOTr, the LTFRB, and the TWG is an important win for the Philippines, particularly for the commuters and the bikers of all three motorcycle taxi companies,” he added.

“I am thankful to everyone who have been with us in this continued journey — the government agencies and their respective heads, the senators and the congressmen who understood the situation and helped us arrive at a consensus, the civil society representatives who passionately stood their ground, the bikers who were behind us all the way, and the commuters and passengers who prayed with us for a peaceful resolution to all this,” Royeca noted.

“I would like to particularly thank the Senate Committee on Public Services, led by Committee Chair Sen. Grace Poe, with the support of Sen. Ralph Recto, Sen. Win Gatchalian, Sen. Imee Marcos, Sen. Joel Villanueva and the other senators who have been monitoring this issue from the beginning, for their acknowledgment of the importance of motorcycle taxis in mitigating our commuters’ daily struggles. And, of course, Sen. Bong Go for bringing the matter to the President and recommending the continuation of the pilot,” Royeca declared.

“This is democracy at work. Everybody stepped in, courts were involved, the secretary, the executive branch, General Gardiola, and the other players in the private sector. So now, everybody’s working hand in hand. I think this is a testament to the success of the democratic process. We’re very happy with the result,” Royeca declared. “Our focus right now is to continue working with the government to make the pilot a success,” he added.

TWG Chair Antonio Gardiola Jr. shared that there is also a new redistribution provision in relation to the riders cap. “Kung hindi kaya ng isang player to come up with the maximum number of riders, ibibgay sa ibang company na kaya,” he said.

“We are considering all sentiments that’s why we came up with this. Even the blacklisting of Angkas is already a closed book,” Gardiola stressed.