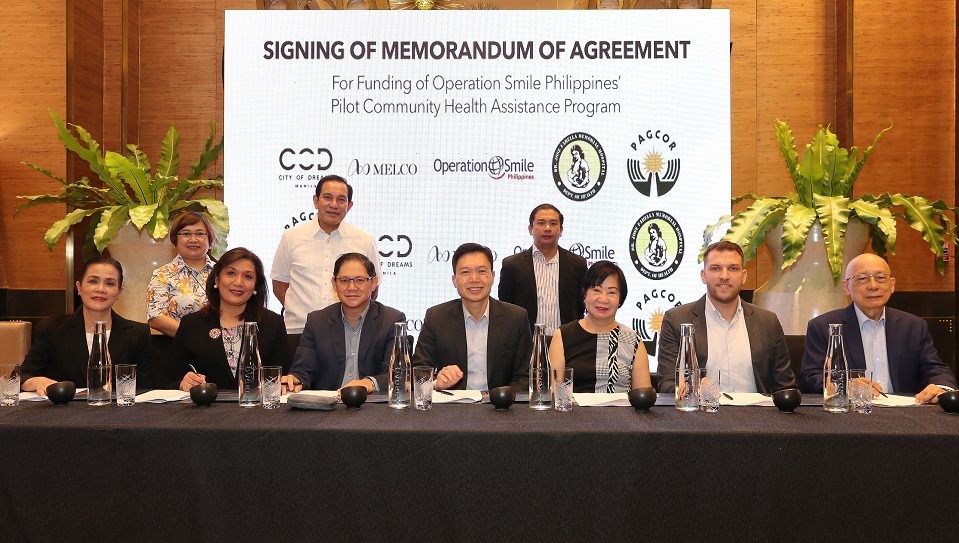 MRP Foundation and Melco Leisure President and Chairman Clarence Chung stated, “In keeping with MRP Foundation’s commitment to implement and fund health programs, we are glad to continue supporting Operation Smile Philippines’ projects to help improve the health of Filipino mothers and children while contributing to the advancement of the government’s efforts to secure a more resilient healthcare system.”

In previous years, Hyatt Regency Manila served as venue for fundraising dinners to sponsor the surgery of children with cleft lip or cleft palate, raising P609,894 and P628,989 in 2018 and 2019 respectively.

OSP Executive Director Emiliano Romano stated, “We thank MRP Foundation and DJFMH for recognizing the importance of CHAP and for extending their support in its implementation. We have high hopes that our partnership would thrive and further broaden to benefit not only the children and mothers in the National Capital Region (NCR) but also those throughout the country.”

Launch of CHAP in Manila

Manila is the pilot site for CHAP. The capital hosts one tenth of the country’s slum dwellers and possesses one of the highest live birth rates among the 16 component cities of the NCR.

CHAP aims to set up the first-ever cleft birth registry at DJFMH and train 150 of the hospital’s and nearby birth centers’ nurses and midwives on lifesaving, emergency situation skills. It also aims to educate at least 6,000 expectant mothers confined in the facility on cleft care and cleft birth risk alleviation.

The program aims to deliver early treatment to children born with cleft lip and cleft palate and enhance the skills of health workers to help reduce maternal and infant mortality.

CHAP’s ultimate goals are to link Manila’s 269 birthing clinics and 895 barangay health centers to DJFMH, adapting Operation Smile Inc.’s hub-and-spoke approach to capacitating health systems in resource-poor countries, and to replicate the program in other parts of the Philippines.

Manila-based DJFMH is the biggest public maternity and newborn hospital in the Philippines – delivering an average of 18,000 babies every year. It is the hospital of choice for maternity care of low-income families in the city and the outlying municipalities.

In the 2019 population survey of the government’s statistics agency, Manila reported a total of 61,700 live births. The entire NCR recorded 242,500 live births, or 14% of the country total of 1.6 million for the year.

The launch of CHAP, a signature program of OSP, coincides with the celebration of the organization’s 40th founding anniversary. The international medical charity has a global network of thousands of medical volunteers with the proper credentials from over 80 countries, helping improve the health and lives of children from more than 60 countries. Since 1982, OSP has been working with local medical professionals, governments, and hospitals, and has established care centers wherever possible. OSP continues to provide training and education for local medical professionals, empowering them to extend care within their own communities and beyond. To date, OSP has been able to provide more than 240,000 surgeries for children and young adults born with cleft lip, cleft palate, and other facial deformities, free of charge.