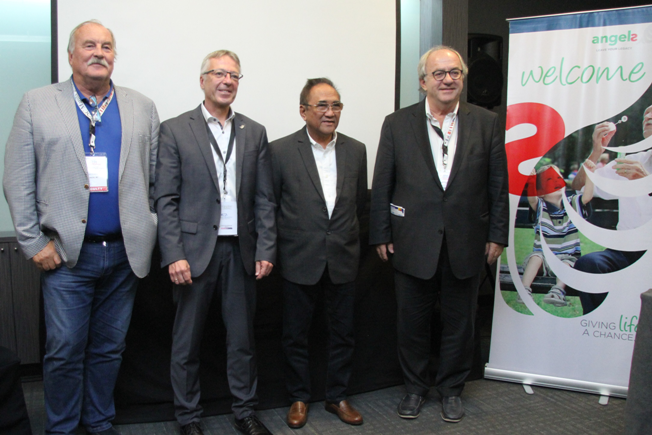 In light of the upcoming World Stroke Day on October 29, the Angels Initiative, a healthcare program that aims to improve hospital care for people who just suffered a stroke, recently hosted a roundtable for the media called, “Angels Initiative: Improving Stroke Care in Asia,” at the SMX Convention Center in Pasay City.

The Angels Initiative is composed of dedicated consultants who provide doctors, nurses and ambulance crews with the training and support they need to create and improve the treatment pathways and processes around stroke care. The Angels consultants run assessments together with the hospitals; compare existing processes with guidelines; provide training and ongoing support for the hospital staff as well as process- and quality-monitoring.

The media roundtable was held in conjunction with the Asia Pacific Stroke Conference (APSC) in Manila on October 2-5, 2019. The APSC focused on highlighting the burden of stroke, globally and locally in the Philippines. The event also featured global and regional key opinion leaders, which includes spokespersons from APSC, Angels Initiative and the World Stroke Organization (WSO). There was also recognition of new hospitals in Southeast Asia & South Korea (SEASK) who received their first WSO Angels Awards at the event.

When does stroke exactly happen? A stroke, or “brain attack,” occurs when blood circulation to the brain fails. Brain cells can die from decreased blood flow and the resulting lack of oxygen. There are two broad categories of stroke: those caused by a blockage of blood flow and those caused by bleeding into the brain. A blockage of a blood vessel in the brain or neck, called an ischemic stroke, is the most frequent cause of stroke and is responsible for about 80 percent of strokes.

“One third of 17 million people die from stroke after exhibiting its symptoms. Another third are left disabled permanently. It is alarming to note that two-thirds of stroke attacks in the world happen in Asia,” according to Prof. Dr. Jose Navarro, Chair of the Neurosonology Group of the Philippine Neurological Association and former P­­­resident of the Stroke Society of the Philippines. “In the Philippines, stroke is the second leading cause of death”

It is also crucial to note that stroke is such a time-sensitive disease that for every minute it is left untreated, up to two million-brain cells die.

“There are more chances that an outcome will be most favorable when a stroke patient receives care 60 minutes upon arrival at the hospital,” explained Prof. Dr. Michael Brainin, President of the World Stroke Organization.  “These patients are more likely to become independent and have a higher possibility of going back home after surviving the disease.”

This is what the Angels Initiative addresses. For the initiative, treating patients as soon as possible, following the best standards of care in dedicated stroke centers, is important so that they can have better chances of survival and living disability-free lives. The initiative provides hospitals with the resources and the support they need as well as the needed training for their doctors and staff so that they can be truly stroke-ready.

Every country that the Angels Initiative is present in has an “Angels Consultants Team” that supports hospitals in implementing stroke care improvement programs. A hospital or center will be considered stroke-ready when it has reached a standardization of processes, which will ensure that stroke treatment is given within 60 minutes of the patient arriving at the hospital.

The Angels Initiative was launched by Boehringer Ingelheim and endorsed by the European Stroke Organization (ESO) and the World Stroke Organization (WSO).  It began in Europe with a team of stroke experts back in November 2014 and now in SEASK (Southeast Asia and South Korea).

An important aspect of the Angels Initiative is the collaboration with local medical organizations, such as the Stroke Society of the Philippines and the Philippine Neurological Association.

Here in the Philippines, the initiative has made considerable progress since it began in 2017 with one Angels stroke consultant and 18 target hospitals in consultation. There are now 11 stroke-ready hospitals in the country with five fully-dedicated Angels consultants and 42 hospitals nationwide in active consultation.

Among the 42 hospitals in consultation, the National Capital Region has the most number with 25 hospitals, followed by Davao, with four hospitals. Cordillera Autonomous Region, Central Luzon, and Central Visayas are also some of the regions with hospitals that are part of the Angels network.

“There are currently 98 Philippine hospitals registered in the Angels Initiative website,” added Fischer. “This is a huge jump from the 32 registrants in 2018.”

During the APSC, Baguio General Hospital and Makati Medical Center received the Q2 2019 WSO Gold Award. The WSO Angels Awards are designed to acknowledge and honor teams and individuals committed to quality improvement in stroke practice and to establish a culture of continued monitoring. For hospitals that are interested in finding out more about the Angels Initiative and how they can be properly equipped to become stroke-ready, they can schedule a consultation with the Angels Team by registering through the official website: https://www.angels-initiative.com (Press Release)

Transparency in PVC procurement sought in the midst of misinformation, monopoly