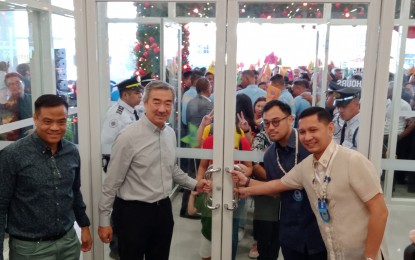 Hans Sy (second from left), chairman of SM Prime Holdings for the executive committee, Pangasinan Vice-Governor Mark Lambino (right), and Pangasinan 4th District Rep. Christopher de Venecia (second from right) lead the ceremonial opening of doors to shoppers of the newest SM Center in Dagupan City on Friday (Oct.4). It is located on M. H. del Pilar Street, Dagupan City and has a floor area of approximately 23,000 square meters, with over 115 stores. (Photo by Liwayway Yparraguirre/PNA)

SM Prime Holdings Inc. (SMPH) opened its SM Center here, its 74th mall in the country, on Friday, October 4, to cater to the shopping and dining needs of Dagupeños and provide thousands of employment to Pangasinenses.

“More than 1,000 employees were hired. It is but logical that we employ those from the city and nearby towns or cities since it is near their residence. We wanted to create more employment as well as income to the city,” said Steven T. Tan, SM Supermalls chief operating officer.

In an interview, Tan said an SM Center is more of a community mall that has a supermarket and lots of restaurants and stores but without a department store.

It is located on M. H. del Pilar Street and has a floor area of approximately 23,000 square meters, with over 115 stores including appliance, fashion boutiques, hardware, shoes, sports, jewelry, eyewear stores as well as bookstores, novelty shops, information technology and electronic goods stores, restaurants, coffee shops, among others.

It also has 278 parking slots, including those reserved for persons with disabilities. It will serve customers not only in Dagupan City but also from nearby localities like Binmaley, Lingayen, Calasiao, Mangaldan, Santa Barbara, Malasiqui, and San Carlos City.

On the other hand, an SM City is complete with amenities such as a supermarket, cinemas, and lots of stores and restaurants.

He said the company will push through with its original plan to construct an SM City here, under their pipeline the target is to open it in 2021 or 2022, which will again give more employment opportunities to the residents of Dagupan and even nearby towns or cities.

Meanwhile, Hans Sy, chairman of SMPH for the executive committee, said they consider and study all aspects before constructing a mall including that of Dagupan City.

“Before we start a project, we always look into the 100-year flooding history. We noted that there is still some flooding issue here. I wish we could really have a total solution, but since there is none, or I could see solutions are still under study, what we did here, we made sure that this (mall) would be protected because we could not think only of ourselves. We also have to think of our tenants who are our stakeholders, make sure that they won’t suffer any problem,” Sy said.

He said they lifted the area, placed a rainwater collection tank (underground) for their cooling towers.

“It is part of our standards. Our standard is we are doing a lot of practices that are not required. Like we recycle all our water (for flushing at the bathrooms/comfort rooms); we have this rainwater collection tank; we do a lot of things that people don’t realize,” Sy said.

“When it rains hard, as far as the footprint of the property is concerned, we are able to control the water going out,” he added.

Before the ribbon-cutting, a mass was celebrated by Archbishop Socrates Villegas of the Lingayen-Dagupan Archdiocese.

The inauguration and ceremonial opening of the mall’s doors to the public was led by Sy and SMPH president Jeffrey Lim.