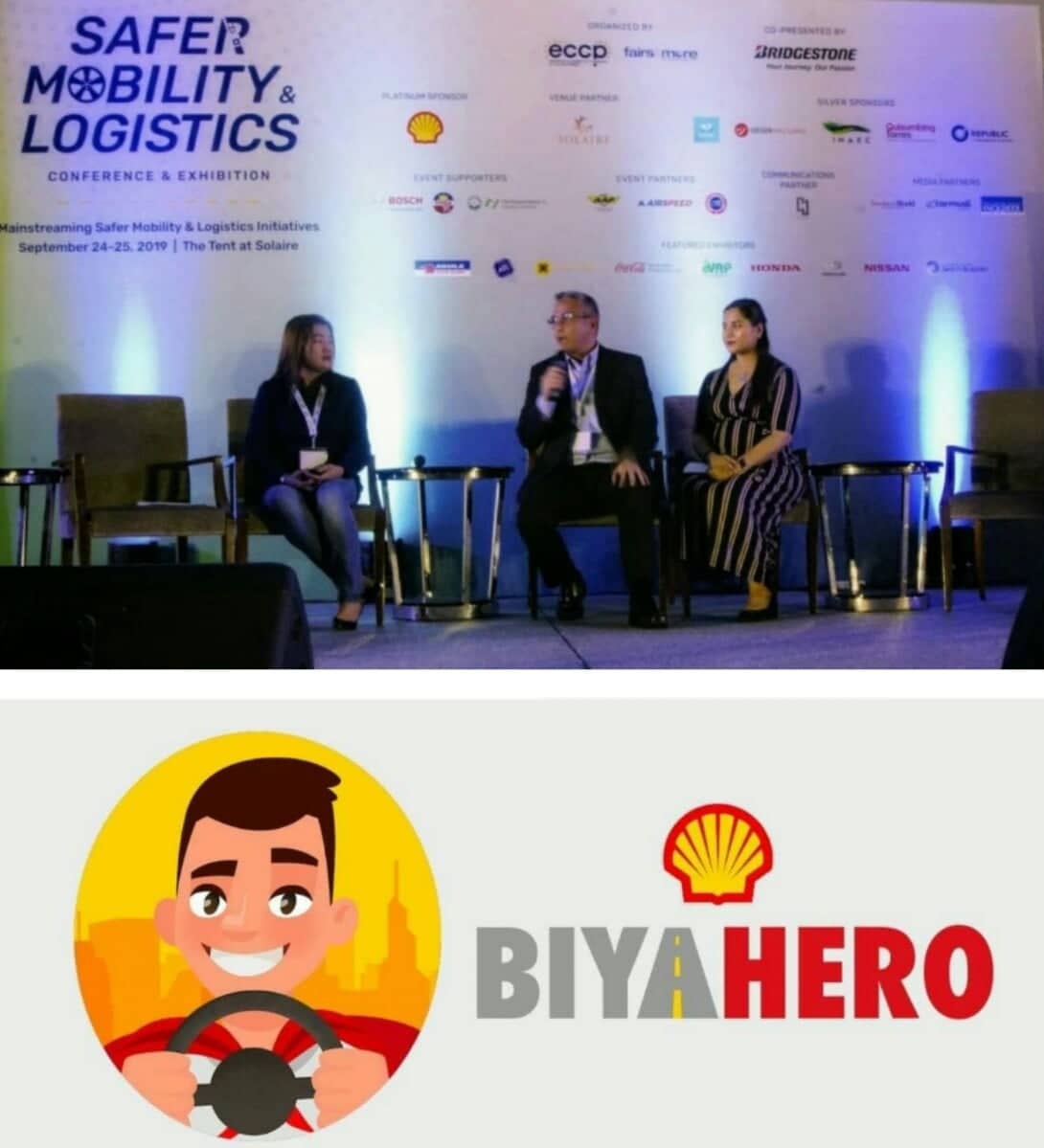 Pilipinas Shell General Manager for Health, Safety, Security and Environment Oliver Ortega (middle) cites a study on road safety as he is joined in the panel discussion by Cynthia Reyes (left) of AAP-PGRSP, and Mandaluyong City Councilor Charisse Marie Abalos-Vargas at the launch of the Shell ‘BiyaHero’ campaign last September 24 at the Tent, Solaire Resort, Pasay City. (Monsi A. Serrano/THEPHILBIZNEWS)

Pilipinas Shell has launched its “Be a Hero on the Road” or “BiyaHero” campaign which promotes road safety practices in a bid to engage all motorists in a shared responsibility to make roads safer and reduce traffic accidents that cost life or limb.

Speaking to THEPHILBIZNEWS, Pilipinas Shell General Manager for Health, Safety, Security and Environment Oliver Ortega said that with this kind of cooperation for BiyaHero, they expect to engage private and public sectors in making a significant impact and awareness on road safety across all classes of drivers.

“We at Shell believe the first step to achieving road safety is to be aware of responsible driving practices,” Ortega said.

As part of the BiyaHero campaign, Shell service centers at the retail gas stations have year-long special offers, such as a free 14-point safety check by expert mechanics to motorists who want to make sure that their vehicles are roadworthy. Free engine insurance and roadside assistance are also available for those who opt for the Shell Helix Ultra oil change package.

BiyaHero has started its efforts in Mandaluyong City, but plans to involve other cities in multi-sectoral efforts to realize better nationwide road safety.

At the same time, BiyaHero is working with the AAP-PGRSP to introduce safer driving practices in Lipa City, Batangas. Shell and the AAP-PGRSP have been partners on such initiatives since 2008.

The initiatives in Lipa and Mandaluyong include a Road Safety for Children program that instills responsibility on the road among the youth.

“The need for collaboration between various sector is empirical. We cannot just blame the enforcer, the driver or any other parties. Road safety starts with all of us, and by having strong awareness, alertness, and preparedness will certainly help save lives,” Ortega said.

For its part, the ECCP expressed hope that the conference sparked enough discussion among safety and logistics stakeholders on how they could contribute to mainstreaming safety by exchanging ideas, initiatives, technology, and best practices.

While comprehensive laws exist – like R.A. 4136, the Land Transportation and Traffic Code – road accidents continue to cause a significant problem. The Metro Manila Accident Reporting and Analysis (MMARAS) 2018 annual report recorded 116,906 total accidents, an increase of approximately 6000 incidents compared to the prior year.

Cynthia Reyes, who represented the AAP-PGRSP, told THEPHILBIZNEWS: “Some, if not most, of our kababayans have this mentality that ‘if I can get away with it, I’ll do it.’ They violate traffic laws because they don’t see enforcers around.”

“We at AAP-PGRSP are taking a more holistic approach to solving the problem by promoting a new kind of safety culture in the Philippines. Through this event, BiyaHero will bring all relevant communities together to envision safer roads throughout the country,” Reyes said.

Shell has prepared several measures that involve numerous different organizations to help promote road safety. Partnerships between Shell and the PNP, PNP-HPG, and LTO to disseminate informative materials such as copies of RA 4136 also help ensure the safety and security of drivers during their journeys.

In addition to training its own truck drivers on how to be safe and responsible on the road, Shell has also partnered with A1 Driving School to teach customers defensive driving.

BiyaHero features various safe driving tips that every driver can use daily to stay responsible, such as the different ways to properly maintain a vehicle as well as what a driver can do to minimize discomfort when in transit.

“Shell believes that through ‘BiyaHero,’ everyone can come together to share the responsibility of making every road in the Philippines safer,” said Ortega.

EU: €125-M investments sure to roll out for Mindanao