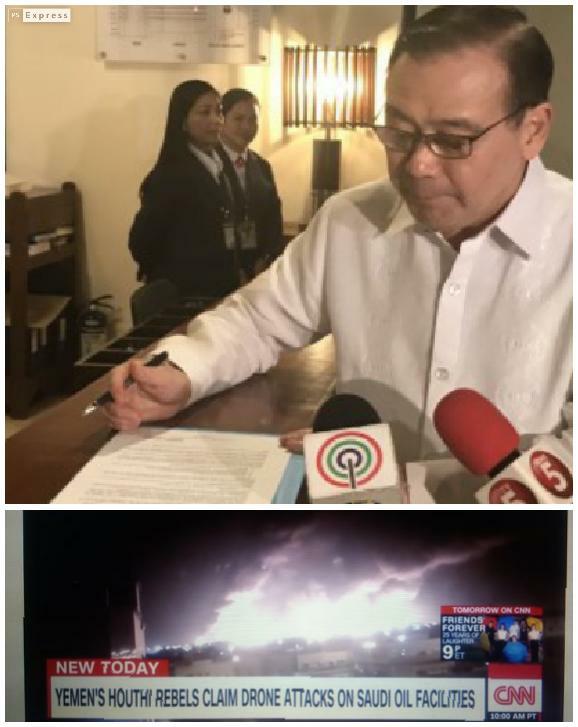 An oil facility in Saudi Arabia is on fire in this footage taken by Reuters and shown on CNN. At right is a file photo DFA Secretary Teodoro Locsin Jr. (Screengrab by THEPHILBIZNEWS courtesy of Reuters via CNN/Photo courtesy of PNA)

Shocking drone attacks on Saturday, September 14, that set a Saudi Arabian oil field and processing facility ablaze have shut half of production in the oil-rich kingdom, troubling the rest of the world with subsequently higher prices of crude in the coming days.

OilPrice.com, a global source of news and developments in the oil and energy industry, reported that half of Saudi Arabia’s production has already gone offline.

“The closure will impact nearly 5 million barrels of crude processing per day, affecting 5 percent of the world’s daily oil production. And while Aramco is confident that it can recover quickly, if it can’t, however, the world could face a production shortage of as much 150MM barrels per month. An outcome which could send oil prices into the triple digits,” it said.

“Houthi rebels – who are backed by Iran in a yearlong Saudi-led battle in Yemen– have apparently asserted responsibility for the strikes and pledged that more assaults can be expected in the future,” reported OilPrice.com.

“Any attack on Saudi Arabia is sure to shake oil markets because they currently hold the majority of spare crude production capacity,” warned Bernadette Johnson, vice president of market intelligence at energy analysts, Enverus, who was quoted in a report by DW.com.

DW.com further quotes Johnson as saying that if the Saudi oil production cut is prolonged, “we should expect to see a big jump in price until the fields return.”

In the Philippines, Foreign Affairs Secretary Teodoro Locsin, Jr. tweeted his concern over the developments in Saudi Arabia.

“This is serious. It will — not could — affect us deeply; to put it bluntly, an oil shortage or steep rise in oil price will rock the Philippine boat & tip it over,” Locsin tweeted.

He said this is not a time for wasted efforts and enjoined stakeholders to focus on addressing the consequences of this development abroad.

SEC embarks on full automation on its Company Registration System

Malacañang: Trillanes can be arrested after SC denied his TRO