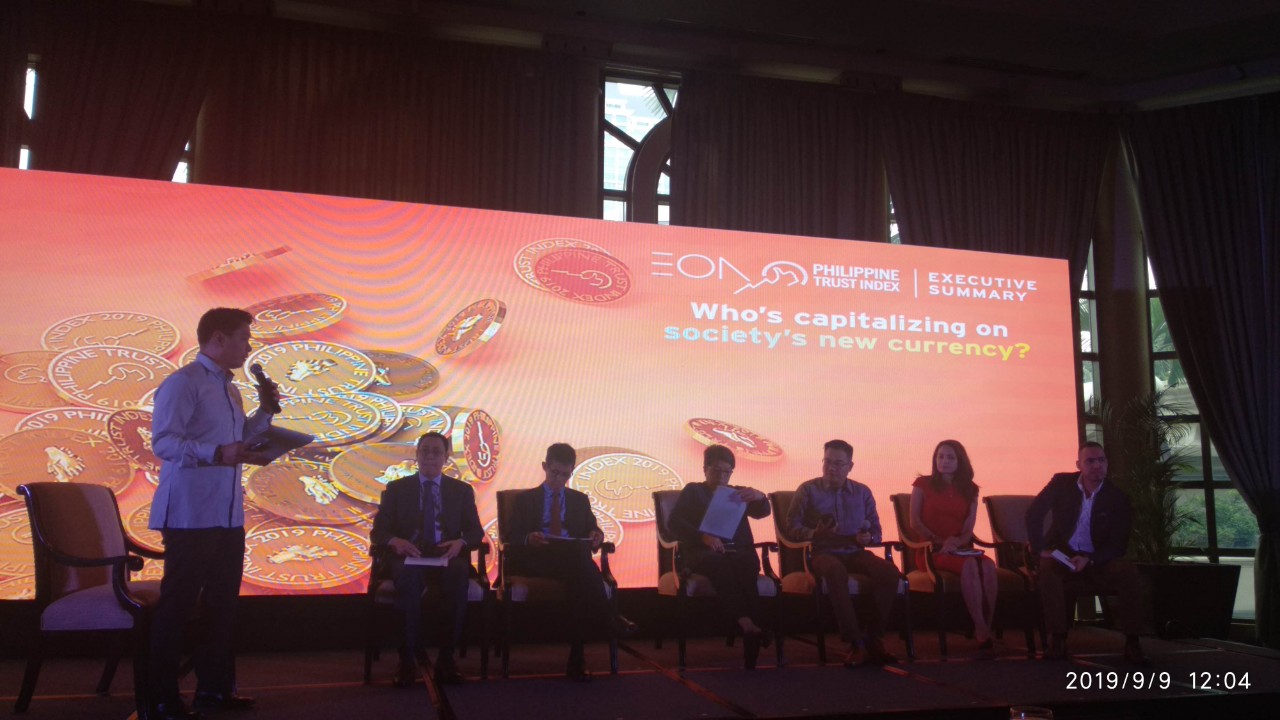 The overall trust rating of Filipinos on the government and five other key institutions — the church, media, business, non-government organizations (NGOs) and the academe – has declined since 2017, even as trust in the Office of the President (OP) soared 4 percentage points in 2019.

The result of the Philipoine Trust Index (PTI) 2019 survey, the sixth iteration released by EON Group in a media conference at the Peninsula Manila in Makati City yesterday, September 9, also showed that a big majority of Filipinos would rather stay in the country.

“This equates to only 1% of total respondents intending to leave the country for good,” EON Group said.

EON, which is a fully-integrated communications consultancy group, announced a consistently high trust rating of the OP from 2017 to present.

It said extreme “trust in the OP increased by 4 percentage points (pp), compared with the overall trust rating of the government, which fell by 4percent since 2017.”

Presidential Communications Operations Office (PCOO) Assistant Secretary Mon Cualoping III, who stood as one of the panelists, said the data has only validated what the PCOO already knew since 2016 — that President Duterte is the most popular and trusted president.

“Trust level towards the president is skyrocketing. He is about strong political will. He espoused the change that the public has been clamoring since the People Power of 1986,” he added.

At the same time, the survey showed that all government sub-institutions, aside from the OP, that earned 82 percent in 2017 and 83 percent this year, experienced a decline in trust levels such as the Office of the Vice President (OVP).

The Supreme Court (SC), on the other hand, maintained its 67 percent two years ago. The Regional Trial Court dropped to 1 percent from its 67 percent in 2017.

“We hope that through the PTI, we can all get a glimpse of a snapshot of our people’s wealth of trust and that we are all provoked to ask the right questions moving forward,” co-founder and chief executive of the EON Group, Junie del Mundo, said during the launch.

The data was based on 1,476 collected responses from randomly selected households across Luzon, Visayas, and Mindanao with a sampling error of +/-2.8 at a 95 percent confidence level.

Among the key institutions, the most significant drop in trust from Filipinos was seen in NGOs, which fell 22 percent from 2017.

Trust in media also took a hit, nine percentage points down from 78 percent in 2017 to 69 percent this year. Interestingly, the data showed that even with the surge social media popularity, Filipinos are not inclined to do away with their reliance on the three traditional media platforms – television, radio and newspapers.

On an overall scale, Filipinos’ trust in all industries such as agriculture, mining, and water and sanitation, also declined from two years ago.

But while trust in business sector declined four percentage points from 75 percent to 71 percent, the survey still showed 80 percent of the respondents believing that the government has worked to “improve” the economy.

Similarly, both the church and academe suffered a 3-percent setback from a trust rating of 93 percent in 2017 to 90 percent this year – relatively, though, still the highest and most trusted across all sectors of Philippine society.

“The Church remains the most trusted institution which was attributed for the Filipinos’ religiosity and reliance on the divine intervention and the strong hope and faith in God,” said Mori Rodriguez, Chief Innovation Officer of EON Group who did the detailed presentation of the data for the six key institutions.

Why is PTI important?

It is a fully integrated communications consultancy with expertise in consumer and corporate public relations; reputation management and public affairs; digital and creative technology; and experiential marketing.

Speaking to THEPHILBIZNEWS, Junie Del Mundo, Co-Founder and CEO of The EON Group, explained the importance of trust in any dealings, and much more in any institution that one leads.

“Back in the time of our parents, trust has already been given emphasis. You want to borrow several cups of rice or money for tuition? No questions asked; you will get what you need right away,” he said.

“And even now, trust is dubbed as a ‘new currency,’ being the most powerful force that leads to influence as inevitable. When you have the trust of the people, you have power; and the more people trust you, the better because, ultimately, when the trust in you is so high, in the process, you will benefit from what you sow. But the challenge is always there, how do you keep the trust bestowed on you from declining?”, Del Mundo explained.

EON Group calls on all institutions to work together and invest in the trust of Filipinos so they can keep calling their country home.

“It is high time to get our acts together and move forward. While we should be elated that despite of the drop in the trust levels of the six key institutions, a greater majority of the Filipinos remain invested in their country based on the total of 99 percent of respondents choosing to retain the Philippines as their country of permanent residence,” the EON Group official said.

“This is EON’s commitment to the country, to provide information in order for everyone to make informed decisions. We will continue to endeavor to work in moving this country forward and unite every Filipino towards a positive change, and make our country, our home that we can always be proud to leave behind as part of our legacy building,” Del Mundo said.

“Let us hope and pray, that whatever trust that the people have bestowed to these institutions will grow like “The Parable of Talents”, wherein each servant was entrusted with the master’s ‘gold’ and then audited later on when he arrived. Let us remember that we are just stewards and pilgrims here on earth. Anything we do, redounds to the next generation and in the next life we are bound to go,” he concluded. (With reports published by PNA, Sept. 9, 2019)