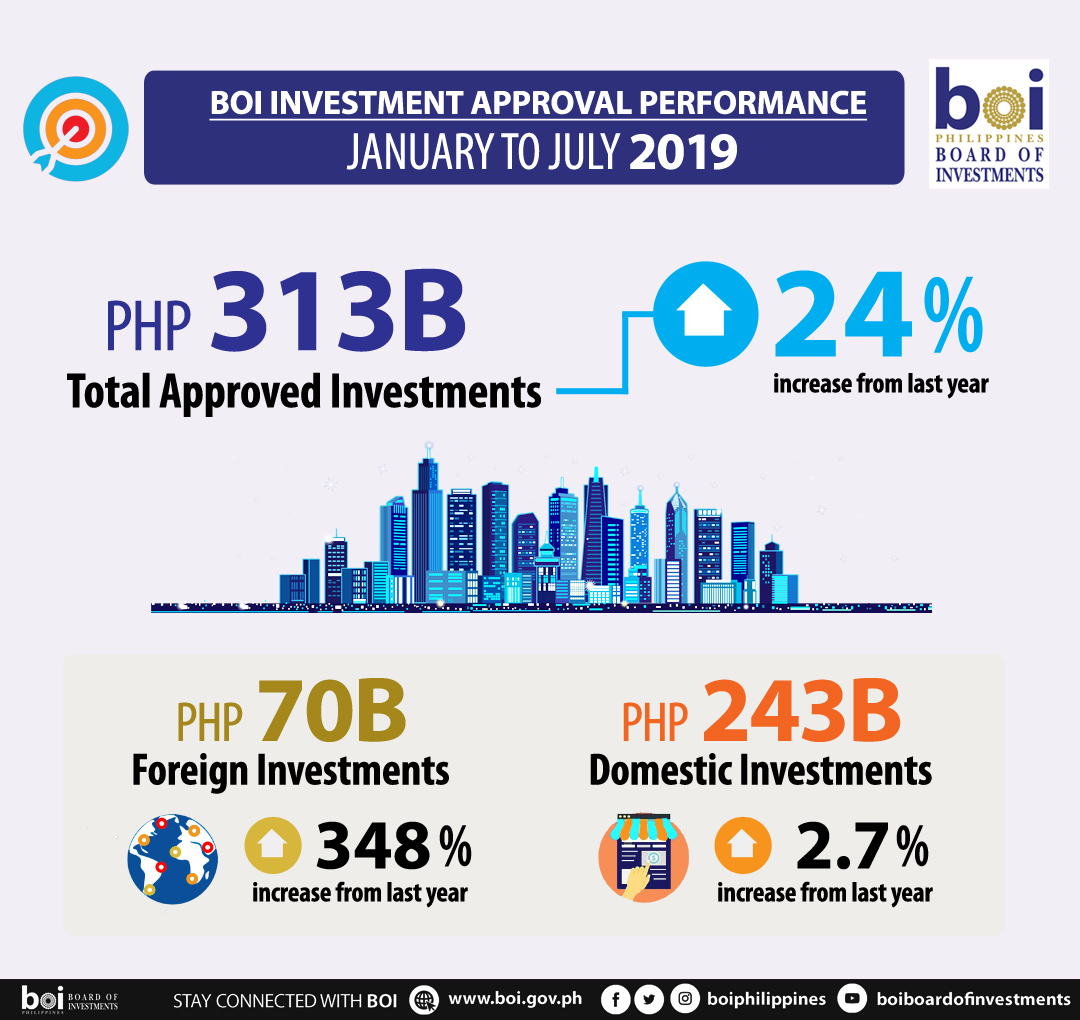 Graphics courtesy of Board Of Investments

Strong business confidence in the Philippines and the Duterte administration reflected well in increased investments approved by the Board of Investments (BOI) in the first seven months of this year, valued at P312.8 billion and translating to a 24-percent increase from the same period in 2018.

In a statement sent to THEPHILBIZNEWS today, August 20, the BOI said it approved P69.6 billion in foreign investments through July, reflecting a 348-percent upturn from the same period last year.

Likewise, local investments remained upward at P243.2 billion, a 2.7 percent jump from that of January to July 2018. These figures show a continued upward trend in investments about 96.25 percent of which are located outside of Metro Manila.

“Investors continue to signal their strong confidence in the Philippines and the Duterte administration despite the challenges generated by the global tensions among nations. This growth was still resilient enough to withstand the global demand downturn brought about by the lingering trade dispute between the U.S. and China, the trade spat between Japan and South Korea, and other geopolitical tensions,” Trade Secretary and BOI Chairman Ramon M. Lopez said.

These developments prove to show that the Philippines remains among the fastest growing economies in Asia and among the few countries to register a 1.5-percent export growth in July. Even the inflation rate has eased the past month as earlier reported by the DTI.

“Elevated inflation is now a thing of the past as the latest inflation rate eased to just 2.4 percent, the lowest in more than two years. We have improved 19 places further in the Global Innovation Index.  With the recent signing of the Innovative Startup Act, we will encourage innovation that will make our products not only meet local demand but ensure it is at par with international standards to boost our exports,” said Lopez.

At this point, the DTI Secretary said the Philippines now has to diversify its markets by identifying new destinations for more opportunities while ensuring that the domestic base remains strong and on the upswing to soften the impact of prevailing trade disputes.

“The recent trade spat between Korea and Japan should urge us to escalate and complete the negotiation of the free trade agreement with South Korea and review or enhance the Philippines-Japan Economic Partnership Agreement to avail of more opportunities and exchanges with Japan. Despite the obstacles to global trade, we have to adapt as we make a push for our domestic industries to grow and move forward,” he said.

For his part, Trade Undersecretary and BOI Managing Head Ceferino S. Rodolfo expressed confidence that the Philippines will hit its economic targets, noting how investments continue to grow despite the current international tensions.

“Our investments are still growing amid the international tensions. We still have a lot of pending projects that need thorough study and evaluation. I am still confident that by the end of the year, we are going to attain our target despite the global uncertainties,” said Rodolfo.

Addressing the global business community, he said: “We assure foreign investors that the Philippines is a safe haven for their investments and they should take advantage of our very strong domestic demand and commit to long-term deals.”

The BOI reported that power projects remained among the biggest investments from January to July this year with P195.1 billion, a 65.3-percent increase from P118 billion in the same period last year.

Pouring into the regions

Region 4A (Calabarzon or Southern Tagalog) remained steady at the top among regions, cornering the lion’s share with P203.3 billion or 65 percent of the total figure.