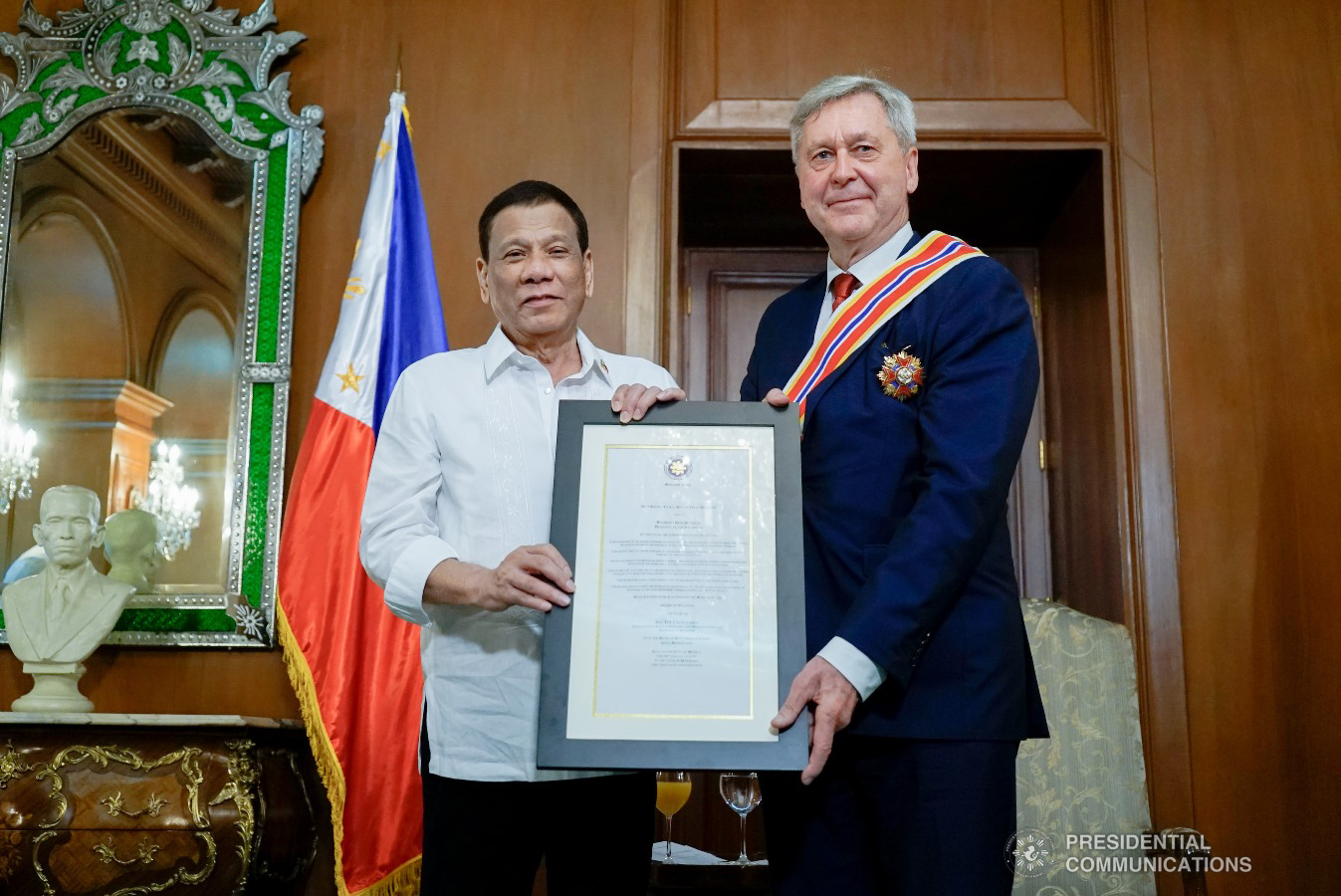 President Duterte confers the Order of Sikatuna Rank of Datu on outgoing Ambassador of Denmark to the Philippines Jan Top Christensen as the latter pays a farewell call on the President in Malacañang on Tuesday, August 6. (Photo by King Rodriguez/Presidential Photo)

President Duterte received in a farewell call Tuesday outgoing Danish Ambassador to the Philippines Jan Top Christensen, awarding the European envoy the Order of Sikatuna, Rank of Datu (Grand Cross), Gold Distinction in recognition of his efforts in strengthening relations between the Philippines and the Kingdom of Denmark.

According to the citation read during the awarding rites, Ambassador Christensen played a key role in the reopening of the Danish Embassy in Manila in 2015 and the Philippine Embassy in Copenhagen in 2019.

He also displayed steadfast efforts in promoting robust Philippine-Denmark cooperation in trade and investment, tourism and culture, as well as people-to-people exchanges.

Ambassador Christensen also paved the way for the establishment of the biennial bilateral consultations mechanism to facilitate regular and constructive dialogue between the Philippines and Denmark.

Through Ambassador Christensen’s initiatives, the Filipino and Danish people forged much closer bond in greater friendship, understanding, and mutual respect.

The Order of Sikatuna is an order of diplomatic merit conferred upon individuals who have rendered exceptional and meritorious services to the Republic of the Philippines; upon diplomats, officials, and nationals of foreign states who have rendered conspicuous service in fostering, developing, and strengthening relations between their country and the Philippines; or upon personnel of the Department of Foreign Affairs (DFA), both in the home office and in the foreign service.

Together with the Philippine Legion of Honor and the Order of Lakandula, the Order of Sikatuna is one of the three senior honors of the Republic.

Also on Tuesday, President Duterte conferred the Order of Lakandula, Rank of Maringal na Pinuno, on Dr. Henry Lim Bon Liong, the president of the Federation of Filipino-Chinese Chambers of Commerce and Industry Inc. (FFCCCII).

The Order of Lakandula was created by virtue of Executive Order No. 236 or the Honors Code of the Philippines. It is the Order of Political and Civic Merit of the Republic, conferred in memory of Datu Lakandula’s dedication to the responsibilities of leadership, prudence, fortitude, courage, and resolve in the service of one’s people.

It is one of the Senior Honors of the Republic together with the Philippine Legion of Honor (conferred for Military and Defense Merit) and the Order of Sikatuna (conferred for Diplomatic Merit).

The Order of Lakandula is conferred by the President of the Philippines.