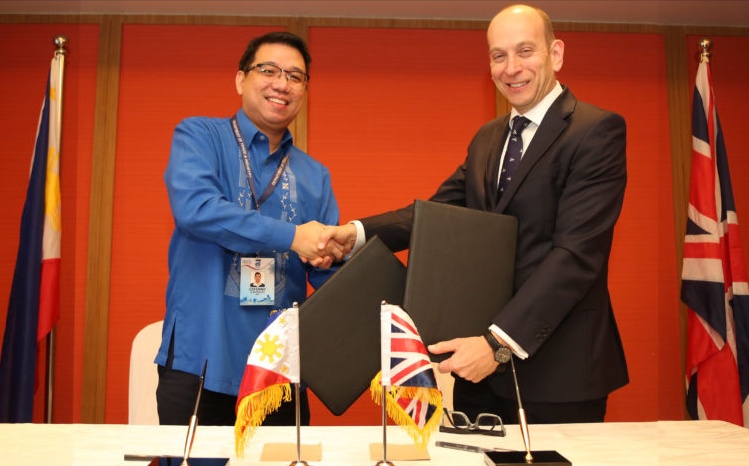 From left, Usec. Ceferino S. Rodolfo, Ph.D., Vice Chairman and Managing Head of the Board of Investments Philippines,  and UK Ambassador to the Philippines Daniel Pruce
Photo by Monsi A. Serrano

The Philippines and the United Kingdom joined forces on the 1st Philippines-United Kingdom Economic Dialogue held on March 21, 2019, in Makati City. The initial meeting was led by the Department of Trade and Industry (DTI) Undersecretary Ceferino Rodolfo and British Ambassador Daniel Pruce.

The dialogue marks a milestone in bilateral economic relations as both sides committed to work towards wider and deeper engagement. Topics important to the economic agenda of the Philippines and the United Kingdom (UK) were discussed: increased trade and investment promotion, economic reforms, MSME development, sustainable and inclusive infrastructure, digital economy, banking, and financial services, and social development in education and health.

With this current and future economic cooperation initiatives across a broad range of sectors under the United Kingdom’s development programs such as the Prosperity Fund were likewise highlighted. The dialogue was capped off by the signing of a Partnership Statement and Joint Action Plan on Economic Cooperation, Trade, and Investment that includes priority sectors for deeper economic cooperation between the two sides such as on trade and investment promotion, industry collaboration, MSME development, innovation, ease of doing business reforms, transparency and anti-corruption initiatives, competition policy, ICT, transport, sustainable infrastructure, banking, fintech,  green finance, capital market development, health, education, and skills development.

Meanwhile, DTI Secretary Ramon Lopez, who met with Ambassador Pruce immediately after the dialogue, said that the Philippines “welcomes stronger ties with the United Kingdom as one of its top trade, investment, and development partners in Europe” and noted that the dialogue signals that “both sides are ready and open for more business.” Undersecretary Rodolfo likewise underscored that “the dialogue allows us to harness complementarities to further strengthen our economic ties.”

Ambassador Daniel Pruce expressed that the UK “remains committed to support sustainable and inclusive development in the Philippines and to enable programs that encourage growing bilateral trade and investment”.

With the successful convening of the inaugural dialogue, the Philippines and UK look forward to increased two-way trade and investments as well as sustained collaboration in concrete and mutually beneficial economic cooperation initiatives.