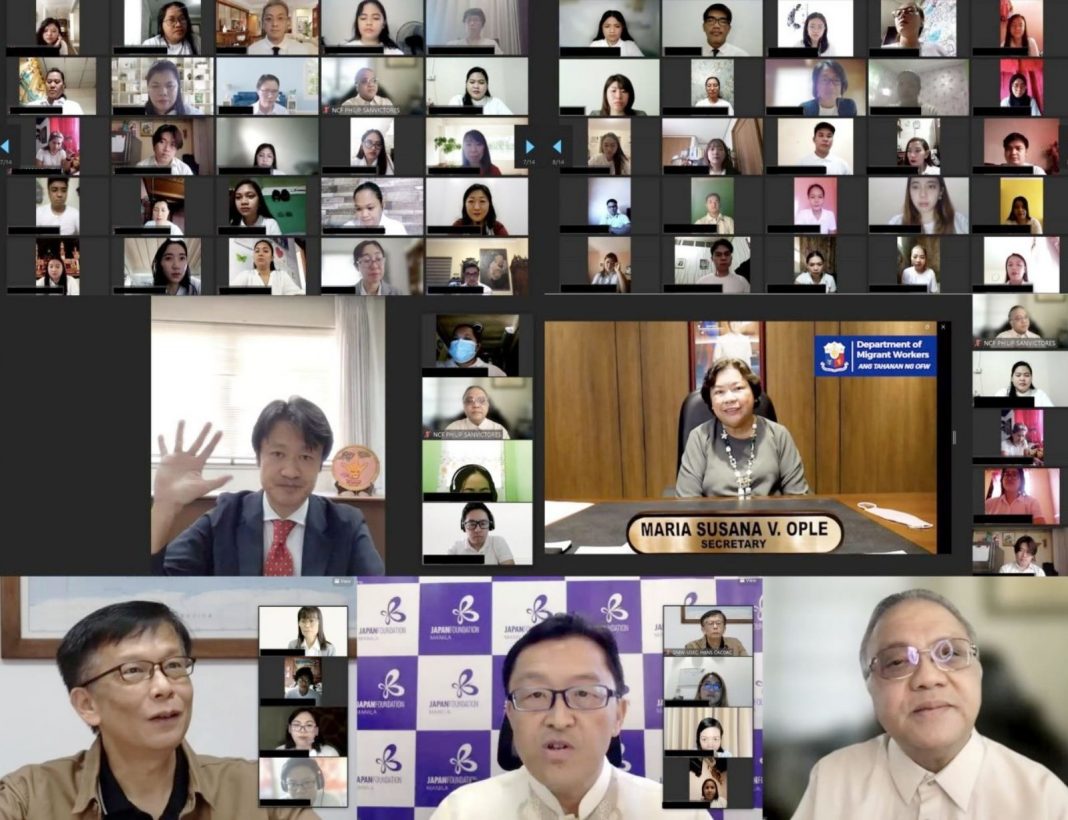 The 15th Batch of candidate Filipino nurses and certified careworkers under the Economic Partnership Agreement between Japan and the Philippines (JPEPA) formally commenced their Preparatory Japanese Language Training on 16 November 2022.

To mark the occasion, a virtual opening ceremony was held on the same day. Economic Minister NIHEI Daisuke of the Embassy of Japan graced the ceremony, along with Undersecretary Hans Leo J. Cacdac and Undersecretary Patricia Yvonne M. Caunan of the Department of Migrant Workers. A recorded video message from Secretary Susan V. Ople of the Department of Migrant Workers was also presented. Also in attendance were Mr. SUZUKI Ben of the Japan Foundation, Manila, and Mr. Philip B. Sanvictores of the Nihongo Center Foundation Inc.

The 256 candidates will undergo a 6-month training on Japanese language, culture and society, prior to their deployment to Japan. The training will be implemented online by the Nihongo Center Foundation Inc. and The Japan Foundation, Manila. Daily living and internet allowances, and a tablet computer device are provided to the candidates, for the duration of the training.

Another six (6) months of onsite Japanese language training will be conducted for the candidates after their arrival in Japan, prior to their definite work term in hospitals and caregiving facilities. Once their initial work term is completed and upon passing the Japanese national examination, candidates may apply for further employment in Japan as nurses and certified careworkers.

In the ceremony, Minister NIHEI thanked the candidates for choosing Japan as their future work destination and for taking on the challenge of learning the Japanese language. He added that the program aims to help Filipinos succeed on their new career in the healthcare sector of Japan, further promoting the good bilateral relations between our countries.

For Interested applicants, visit the official Department of Migrant Workers website for announcements regarding the program. https://www.dmw.gov.ph/