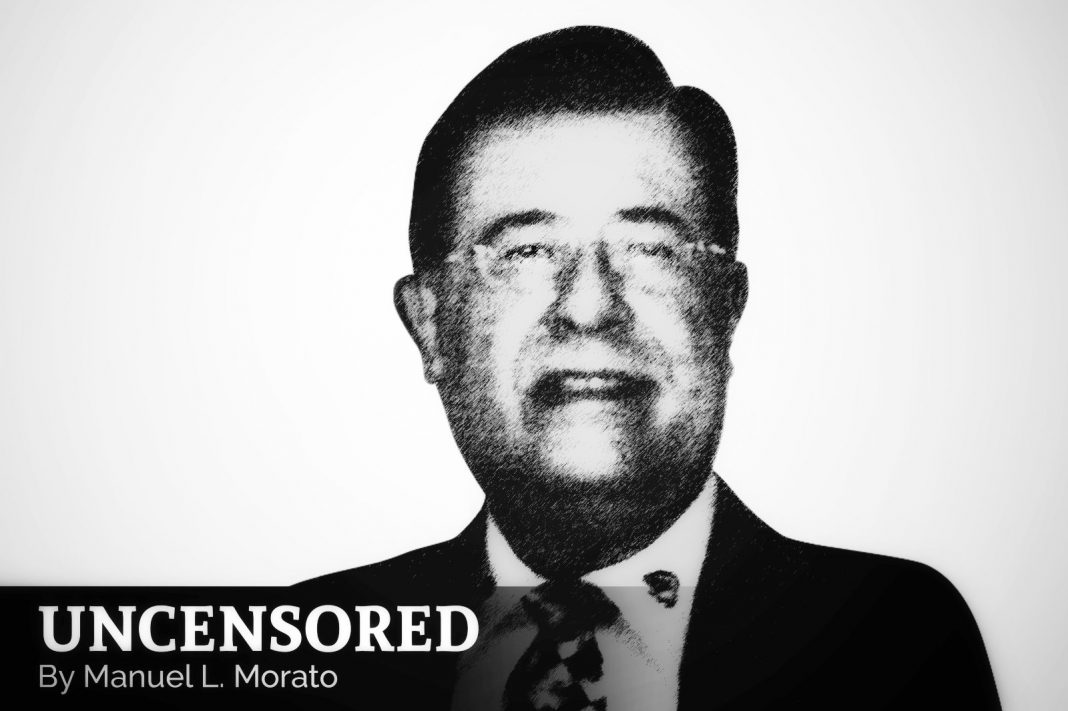 In the First Congress of the Republic in 1946, after we got our Independence from the United States of America as one of its Commonwealth, my father Tomas B. Morato was elected Congressman of the 2nd District of Quezon Province.

Now it can be told.  My father never wanted to enter politics.  It was upon the request of President Manuel Roxas that he was forced into it.

Hesitantly, he ran without campaigning.  It was only accommodation to President Roxas’ request.  But lo and behold, he was elected almost unanimously by the people of Quezon Province; the first of its kind at 98% of the votes.  My father did not campaign but was overwhelmingly elected as First Congressman of Quezon Province.

I can only attribute it to my father’s pro-poor sympathetic heart.  He was a giver, not a taker.

My father was a logger, lumberman-founder of the Sta. Cecilia Sawmills, Inc. way back in 1912.  Then in the 1940s, he founded the Philippine Plywood Corporation, the first plywood company that exported to Japan, U.S. and other countries.

I was then a young teenager at the time; and based on my recollection, there were some things I recall, one of which is a bill he had authored in Congress.

About a week ago, I heard President Duterte say on TV that he does not know how to solve the problem of illegal loggers – if I got it correctly.

Since I was just about 13 years old when my father became a member of the First Congress of the Republic representing the 2nd District of Quezon Province, I vaguely remember the Bill that he had authored in Congress named “Selective Logging.”

Kaingin was rampant at the time and log smugglers as well.

If the Bill on “Selective Logging” can still be found in the record of Congress, it might be important for a copy to be submitted to President Duterte and for the DENR to review.

I heard my father talk about the Bill on “Selective Logging” in order to preserve the lumber concessions granted by the government.  Our logging concession was in Quezon Province extending to Camarines Norte.

The Kaingeros were rampant and one of the solutions which my father resorted to was to put more forest guards at the expense of our family corporation.

On the part of the government, the Department of Environment and Natural Resources (DENR) assigned forest guards to watch and monitor the forests.  But the DENR placed very few forest guards that it was impossible to properly police and watch over the forest lands.  Aside from that, they were poorly paid with no amenities, not even armed to protect themselves.

These forest guards risk their lives, most of the time alone, roaming huge forest lands.  They were often intimidated by “people in the mountains.”

I have also heard of forest guards assigned by the DENR who were not even equipped with rifles to protect themselves, not even from wild animals.

The “Selective Logging” made sense.  After I graduated from Loyola University of Los Angeles in 1957 with a degree in Economics, I joined my father’s companies to make-up for all the years I spent abroad, away from my family.

Forests are spectacular to see.  The abundance of trees is so refreshing to behold.  But there is something that we don’t realize that trees in vast forest lands are congested magkakadikit, some of which have reached “old age” and have grown to its fullest life-span.

As I recall, “Selective Logging” applied on the very big trees that have grown old.  They are marked by the Foresters.  Those are the ones that can be cut to allow the smaller trees to grow.  There is also the danger of big, old trees being felled by strong typhoons, damaging the smaller trees.

Another point to also consider is the idea of weeding out the old, big trees, too big to be left in the forest to die or to fall on many other young trees below.  As I said, those old trees are marked.  They can be harvested.

It is really a question of rationalizing logging by weeding out the overgrown old trees.  That can serve the needs of the people as to construction of houses and furnitures; and while the old trees are being harvested, my father explained to me (and I believe it is contained in his Bill which I have not seen) that for every old tree cut, three young trees must be planted to replace the old tree.

Another reason to rationalize this “Selective Logging” is while the very big trees are cut; and three young trees are replaced with, the newly planted trees can enjoy the sunshine it needs to grow.  Many small trees in the forest cannot reach its full maturity for lack of sunshine prevented by the huge and over-aged trees.

In the United States, clear-cutting is practiced.  If a forest land concession measures 50 hectares, for example, half of it can be cut; then replanted with trees; while the other half is being cared of to grow to harvest size.  So, palipat-lipat lang and there is no scarcity of wood for the construction industry.

Hindi yon puwede sa atin.  Uunahan tayo ng kaingeros, log smugglers and other so-called “tabloneros” who put up portable mini sawmills right inside the forest and cut the wood and sell to hardware and furniture shops – as “finished products.”  It is a practice to evade being caught hauling logs in the check points along the highway.  But with cut lumber, they get away with it.

Before I took over the companies after the death of my father in March of 1965, I was faced with a furniture maker in Bicol who was able to get a few hectares in the middle of our concession.  The owner of that furniture business applied and was granted.  But said company which the DENR accommodated inside our concession ended up spreading its operation, bigger and bigger, to the point that the DENR charged us of illegal logging when it was that furniture company in Bicol who was abusing the permit the DENR had given the owner.

To this day, I ask myself why that permit was given inside our concession.  The DENR was accusing the Sta. Cecilia Sawmills, Inc. and Philippine Plywood Corporation, our family companies that “owned” the lumber concession.  We were the ones licensed to operate to supply our sawmills and plywood plant with raw materials.

In the late 1950s, when I joined the two family companies as vice president, after graduating from Loyola University, there was a slump in the plywood export market to the U.S. and other countries.  Our plywood plant had always been on three shifts despite the slow down.  When I saw the plywood piling up in the compound of the plant, I talked to my father to reduce the shifts from 3 to 1 until the market abroad improves.

He said something to me that I will never forget.  He told me in Spanish: “Hijo, if you reduce the shifts from 3 to 1, our employees won’t be able to eat and take care of their families.  Continue with the 3 shifts for our employees (800 of them at the time) won’t be able to eat.  It’s only money what we are losing.  We can earn those losses later on.  But if our employees and families die of hunger, will you be able to give back the lives lost?  Money can be earned again.”

From that day on, I threw my economics degree out of the window.  My father was right that it pricked my conscience.

How right he was.  God bless him.  He gave away all the unsold plywood that filled the big compound to the poor and the needy to build their houses.

When I was appointed by President Cory as MTRCB Chairman in 1986, my youngest brother took over.  I thought he was capable of heading the two corporations.

To make a long story short, the two corporations suffered bankruptcy in 1988/89.  I was still Chairman of MTRCB.  I took over again, but it was too late for me to revive.  I don’t want to explain why.  The employees know.  Somebody provided for himself and forgot the rest of the family and employees.  All those problems fell on my lap when I was not at all responsible for what had happened.

Before I end, please allow me to reiterate what I said in a nutshell: To preserve the forest lands, it needs more well paid Forest Guards.  Private companies must also contribute and not rely fully on what the government can do.  The private sector must also cooperate.  During our time, foresters on helicopters occasionally observed the forest lands.  It helped a lot.