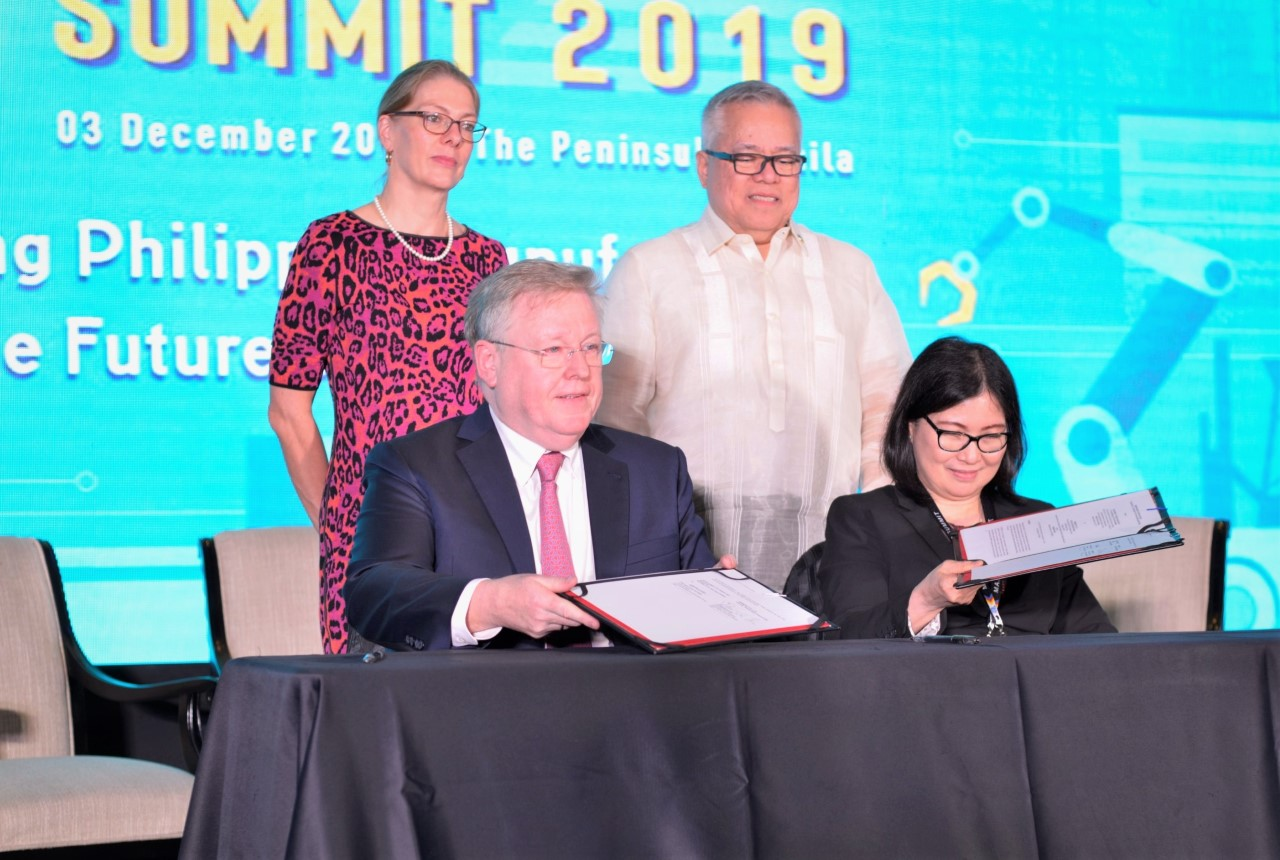 Mr. Raimund Klein of Siemens ASEAN and Undersecretary Rafaelita Aldaba of DTI; at the back: German Ambassador to the Philippines Anke Reiffenstuel and DTI Secretary Ramon Lopez

The Trade Department recently signed a Memorandum of Understanding (MOU) with two other government agencies, in a move to gain the momentum of preparing the labor sector for future production requirements in the manufacturing industry in light of Industry 4.0.

At the recently concluded Manufacturing Summit 2019, not one, but two formal MOU signings were made. The first MOU was between DTI, DOLE, and TESDA, which formally included the latter two agencies in the expanded MOU between government agencies signed last year during the Inclusive Innovation Conference 2018. The DTI, DOLE and TESDA will be   cooperating on the innovation initiatives agreement, specifically on HR Development, reskilling, and upskilling of workforce. Aside from DTI, the other MOU signatories from last year include DOST, NEDA, DEPED, CHED, DICT, and DA.

The second MOU, on the other hand, is an agreement of cooperation specifically between DTI and Siemens, which would provide assistance to DTI in advancing 4IR initiatives in the country. Both parties agreed to closely collaborate in creating an Industry 4.0 roadmap that is geared towards ushering the manufacturing industry and the Philippines towards the Fourth Industrial Revolution. The MOU signatories were Mr. Raimund Klein representing Siemens ASEAN and Undersecretary Rafaelita Aldaba for DTI.

DTI Secretary Ramon Lopez welcomed this development as he said, “with these (MOU signings), we hope we can revitalize the manufacturing sector.” “This is the sector that can bring in more jobs for the Filipinos, helping achieve the vision of our President in having more Filipinos live more comfortable lives.”

DTI Undersecretary Rafaelita Aldaba furthered that, “the signatories’ presence today to sign the MOUs is a strong indication of the value and importance that we put in shaping the future of production in the Philippines.”

According to the World Economic Forum, Industry 4.0, or the 4th Industrial Revolution (4IR), is described as the advent of “cyber-physical systems,” enmeshing digital technology with our physical society and enterprises that result to entirely new capabilities for people and machines. While these capabilities are reliant on the technologies and infrastructure of the Third Industrial Revolution, 4IR represents entirely new ways in which technology becomes embedded within societies and even our human bodies. Examples include genome editing, new forms of machine intelligence, breakthrough materials and approaches to governance that rely on cryptographic methods such as the blockchain.

Good governance for start ups to kick off in 2020, tech innovator Angkas joins