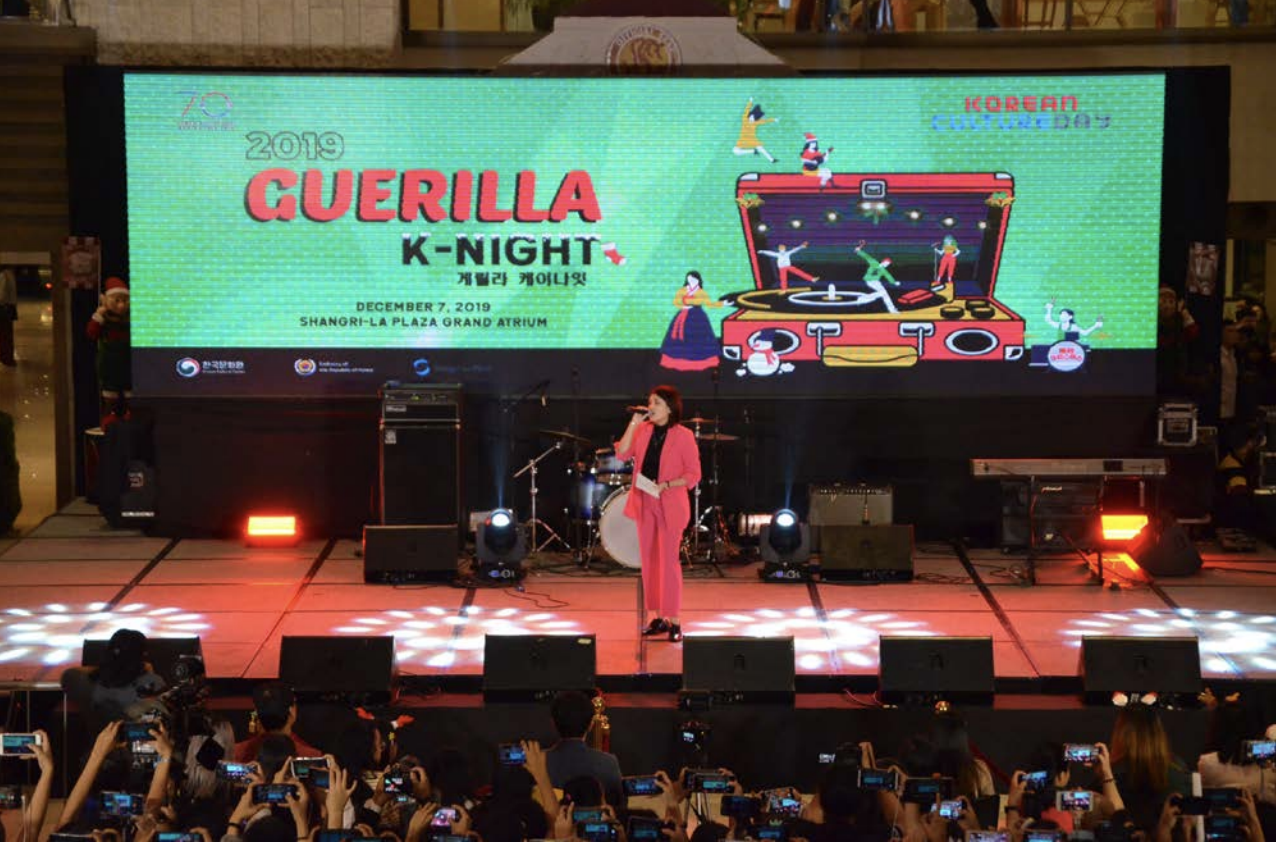 The Korean Cultural Center (KCC) in the Philippines’ traditional formally ended the yearlong celebration of the 70th anniversary of the strong friendship between Korea and the Philippines.

As expected, hundreds of eager fans, Korean culture supporters, and music and performance enthusiasts came to the final event of the ‘Guerilla K-Night’ last December 7 at the Shangri-La Mall,.

Shangri-La Plaza turned out to be a perfect arena for cultural exchange as Filipino and Korean performers exhibited their talents.

Lines and crowds filled the venue as the event-goers visited the various booths who also came to participate in the event; among them are KCC, Nature Republic, K-Movies Channel, AsiaNovela Channel, Philippine K-Pop Convention, Hanbok Palace and NCat.

The Filipinos were also treated with a one-of-a-kind K-Pop dance and VR experience through the K-Pop Dance Revolution and Dojagi AR/VR Hallyu contents booths, both of which especially flew into the country to give the
audience a remarkable Guerilla K-Night Experience, together with Talk Talk Korea, the latest global contest of Korea-related content.

The true highlight of the event are the world-class performances showcasing the artistry of Filipino performers namely Teenage, Mix’in, Yara, together with local independent bands Kremesoda and Any Name’s Okay, as well as the Filipino idol group SB19. Korean independent
synth pop band, We Are The Night’s spot earned a lot of cheers as well, as they brought chill and island-vibe songs into the fore as the final performers. In keeping with the holiday mood, the event ended with a festive collaboration number of all the artists to the tune of “All I Want for Christmas Is You.”

As the year wraps up on a high note, KCC is looking forward to pushing the envelope further in terms of promoting traditional and alternative culture, collaborating with local agencies and talents, and exploring other facets of the Korean culture next year.

Why we run for our culture

Integrity and Ethics in a Governance Program