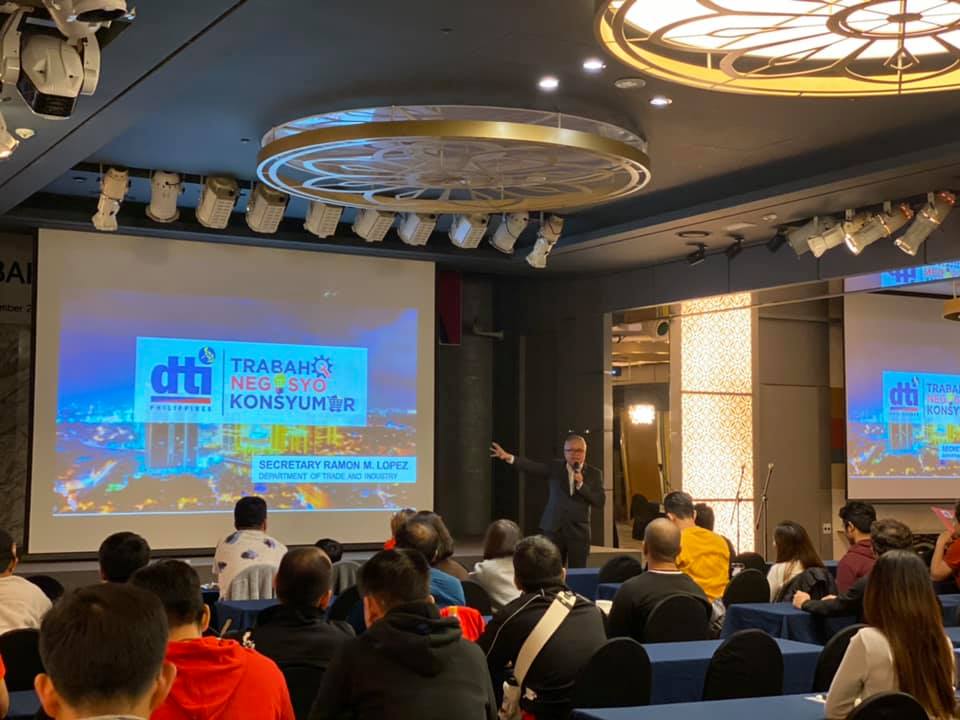 DTI Secretary Ramon M. Lopez shared today the overall macroeconomic development in the Philippines and DTI's programs which our OFWs can benefit from at the Trabaho Negosyo Kabuhayan (TNK) event in Busan during the ASEAN-ROK Commemorative Summit. (Photo from DTI OSEC)

Busan, South Korea – It’s a done deal as Philippines and South Korea signed an “Early Achievement Package” ahead of the conclusion of the free trade agreement between the two countries by the first half 2020.

The package was signed by Department of Trade and Industry (DTI) Secretary Ramon Lopez and his Korean counterpart Minister Yoo Myung-hee on 25 November at the sidelines of the ASEAN-Korea Commemorative Summit in Busan, South Korea. In a joint statement, the two ministers affirmed that the Early Achievement Package will be further improved and incorporated in the free trade agreement.

Negotiations for the Philippines-Korea Free Trade Agreement (PH-RK FTA) began in June 2019 to advance economic relations by enhancing trade and investment flow between the Philippines and South Korea through the removal of trade barriers and the creation of business and investment opportunities.

Since then, rounds of negotiations have been convened from June to September, with intersessional meetings in October and November. So far, the negotiating team concluded the Chapter on Competition and made significant headway on the remaining six chapters: Trade in Goods, Trade in Services, Investment, Rules of Origin, Economic and Technical Cooperation, and Legal and Institutional Issues.

Sec. Lopez said that while the free trade negotiations have not been concluded this November, it is commendable that both sides have achieved substantial progress both in the market access and text-based negotiations in a span of just six months. For the Philippines, the trade chief said that the goal was to improve market access for agricultural products such as bananas and other tropical fruits, as well as industrial products and other services.

Bananas are a particular interest to the Philippines to level the playing field with its competitors. With a tariff rate of 30% for banana exports to South Korea, the Philippines is at a disadvantage to Vietnam, which will enjoy zero tariffs by 2024. Peru already has zero tariffs for banana exports, while other Central American countries will enjoy the same perk by 2021.

“The FTA, once enforced, will be an important vehicle for improving the balance of trade with South Korea through enhanced trade flows, facilitating the movement of natural persons, and generating more investment opportunities and by extension, job generation possibilities,” he added.

Aside from presenting the Early Achievement Package, the trade chief also conducted a “Trabaho, Negosyo, Kabuhayan” (TNK) seminar for Overseas Filipino Workers (OFWs) in South Korea. There, he shared DTI’s current programs for OFWs that can help them and their families start their own business in the Philippines. Raymond Abrea of the Asian Consulting Group also gave a tax literacy seminar for the attendees.

South Korea is the Philippines’ 4th major trading partner, 8th export market and 2nd import supplier in 2018, with total trade amounting to US$ 13.92 billion. Top exports to South Korea include bananas and electrical and semiconductor products while top imports include petroleum and integrated circuits. Through the FTA, the Philippines hopes to increase exports of food and agriculture-based products, auto parts, organic and natural products, and design-driven products like garments and furnishings, among others.

Cardinal Tagle is the new Prefect of Propaganda Fide

SEC embarks on full automation on its Company Registration System