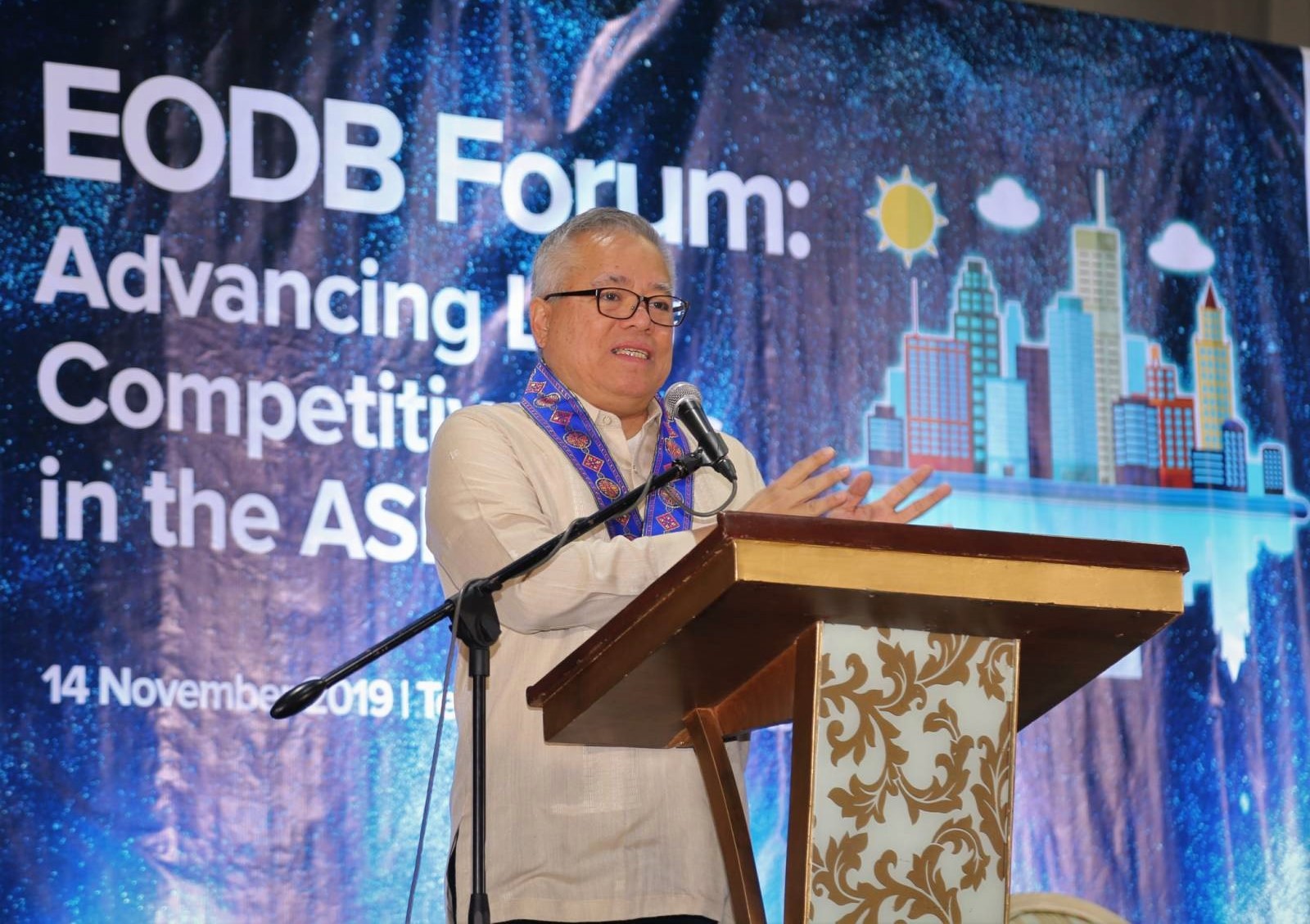 Having an improving ease of doing business (EODB) in the cities and municipalities will create a “virtuous cycle” that will attract investments and jobs in their areas.

“The Ease of doing business will attract investments that will lead to more business, jobs, and economic activities that will benefit your localities. These will lead to prosperity and urban development that will again attract more investments. It’s a virtuous cycle,” the Trade Chief said.

Secretary Lopez gave his welcome remarks before 900 officials from local and national government units November 14 at the Manila Hotel.

Likewise, the event served as a venue for government agencies to share their best practices in improving EODB, as mandated by the Republic Act 11032 or the Ease of Doing Business and Efficient Delivery of Government Services Act of 2018.

Sec. Lopez said that he is honored to speak before local government officials, as they are the “people on the ground” implementing EODB reforms. He cited DTI’s own efforts to digitize and streamline the business name registration process to eight minutes. He also praised the efforts of Valenzuela City, the City of Manila, Quezon City, and Parañaque City, and encouraged all local governments to follow suit.

With its recently-launched Paspas Permit, Valenzuela City is the first local government unit to have an end-to-end integrated business permit application system. The online system processes permits within 10 seconds after the submission of all forms.

The three other cities all launched their respective projects this year. Paranaque’s Project ELO 2.0 (Express Lane Operation), a 3-step business registration process launched in August, releases the Mayor’s permit, including the barangay clearance, within two hours.

The City of Manila established a Business One-Stop Shop (BOSS) in July that releases the Mayor’s permit within a day, with a one-hour best case. Quezon City, which was the pilot city for the Philippines in the World Bank Doing Business 2020 survey, also established their BOSS system that included construction permits.

Sec. Lopez highlighted the Philippines’ 29-notch jump in the Doing Business survey from 124 to 95 this year. He said that DTI and related agencies are working “on the road to 70” and will not stop innovating until the country reaches the top 10.

DILG Secretary Eduardo Año said that he hopes that LGUs will continue to streamline and reengineer their processes. He likewise congratulated the EODB efforts of San Fernando in Pampanga, Parañaque City, Muntinlupa City and Cagayan de Oro City, which shared their best practices at the event.

Secretary Gregorio Honasan revealed that the DICT is working with the DTI and the Anti-Red Tape Authority (ARTA) to establish a Central Business Portal, an end-to-end online portal for business registration, as well as a physical National Business OneStop Shop that will host all offices relevant to business registration in one place.

ARTA Director-General Jeremiah Belgica gave an overview of RA 11032, including the stiff penalties for offenders, and shared ARTA’s efforts to convene several agencies to further streamline government transactions.
The secretaries and DG Belgica echoed that ease of doing business is a priority of President Rodrigo Duterte, as the latter wants to ease the suffering of Filipinos who want to start their own businesses.