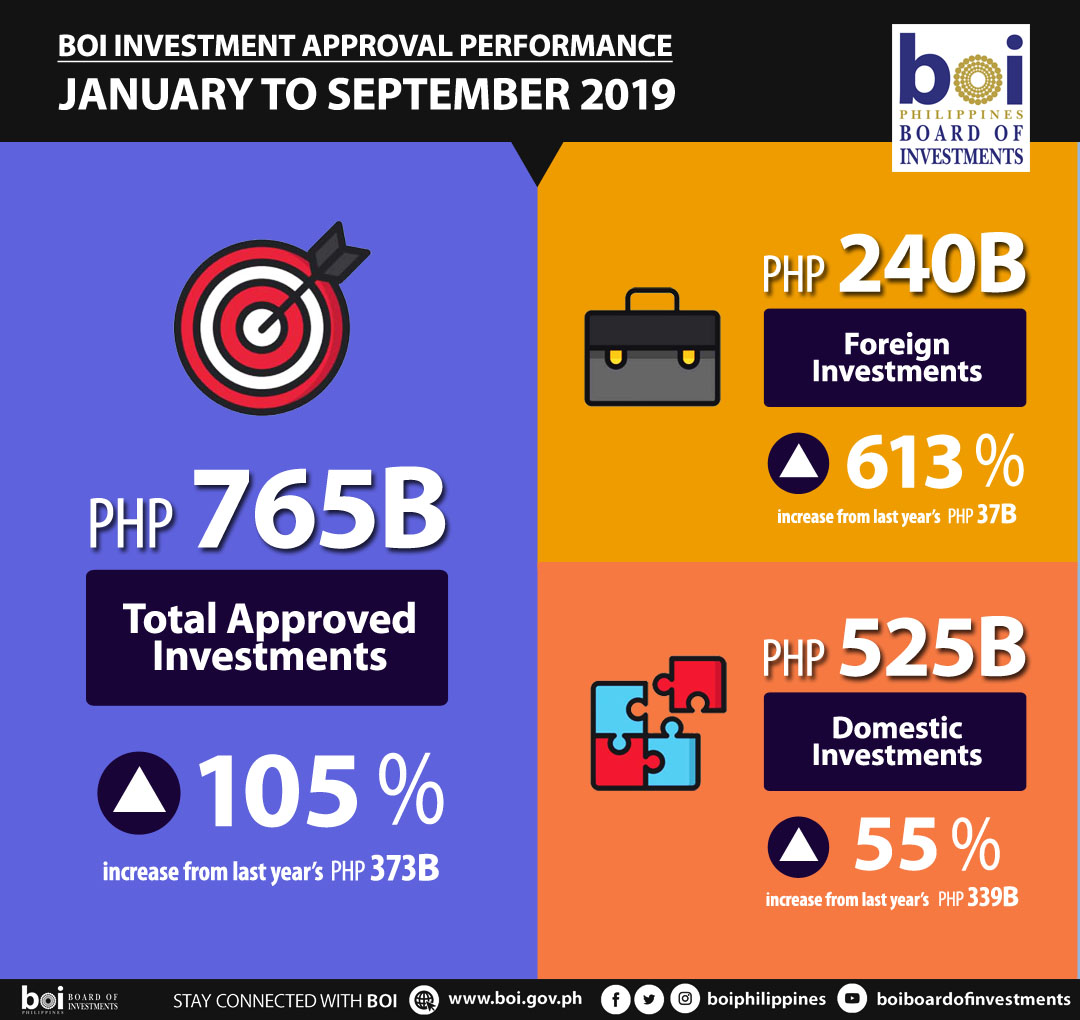 Infographics courtesy of Philippine Board of Investment

The recorded cumulative investments by the Philippine Board of Investments (BOI) has reached Php764.7 billion as of September 2019, increasing more than two-fold (105 percent) in comparison with Php372.9 billion approved in the same period of the previous year.

According to Trade Secretary and BOI Chairman Ramon M. Lopez, it is the strong confidence of the business sectors that sustained high growth of investments and the Philippines’ economic fundamentals as further shown by the acceleration of the third quarter Gross Domestic Product (GDP) growth to 6.2 percent and the reform agenda of President Rodrigo Roa Duterte.

The approved investments from domestic sources topped Php524.9 billion, a 54.7 percent increase from Php339.3 billion in the same frame in 2018.  On the other hand, approved projects by foreign investors amounted to Php239.9 billion which is more than a seven-fold surge (613 percent) from just Php33.6 billion a year ago.

Singapore continues to set the pace among all foreign entities with Php170 billion in capital. South Korea is now second with Php34.1 billion. Netherlands places third with Php9.2 billion.  Thailand (Php8.6 billion), Japan (Php6 billion) and the United States (Php2.4 billion) are also among the biggest foreign investors for this period.

Overall, investments outside the National Capital Region accounted for 98.2 percent of the total of Php750.9 billion.  All projects once operational will generate an employment of 41,862, which is 38.5 percent higher than last year’s figure of 30,218. For the month of September alone, Php155.7 billion worth of projects were approved, a 50.3 percent jump from just Php103.6 billion in September 2018.

“We are particularly pleased to highlight that the share of foreign investments in BOI projects have increased from just 8 percent during January to September 2018, to already 31.4 percent this year,” in the statement sent by the office of the DTI Secretary Ramon Lopez added.

The Trade Chief further explained that the growth is expected to continue noting that President Duterte’s policy of furthering relations with non-traditional partners has been yielding results.

For example, the recent visit of a Russian Trade delegation in the country and President Duterte’s second official visit to Russia will pave the way for more business opportunities and closer economic cooperation for both countries. Some of the biggest Russian companies have express interest in investing in the Philippines, led by Russian Deputy Minister Aleksey Gruzdev.

“Investments from the information and communications technology (ICT) and power sectors accounted for 85 percent of the total figure or Php652.9 billion. This massive infrastructure buildup for more power and connectivity across the archipelago is critical towards addressing binding constraints to the Philippines’ competitiveness. The development also complement the consistent growth of the manufacturing sector with Php63.5 billion in approvals or a massive 190 percent growth from just Php21.9 billion last year,” stated Trade Undersecretary and BOI Managing Head Ceferino S. Rodolfo.

“Growth in the tourism sector also continues to shine with Php9.5 billion worth of hotel and accommodation projects, a nearly seven-fold increase from just Php1.2 billion in the same period last year.  Tourism is among the biggest job creators in our country along with manufacturing. With the innovative advocacy campaigns of the Department of Tourism, the Philippines experience an overwhelming surge of domestic tourists which reached over 110 million in 2018 and already exceeded the 89.2 million target by 2022 as stated in the National Tourism Development Plan (NTDP). So we look forward to the coming years for a tourism boom with the recent announcement of a well-known brand (Marriot) to triple its portfolio by building 21 more hotels and the aggressive expansion of more affordable hotels (like RedDoorz) in the country,” Rodolfo said further.