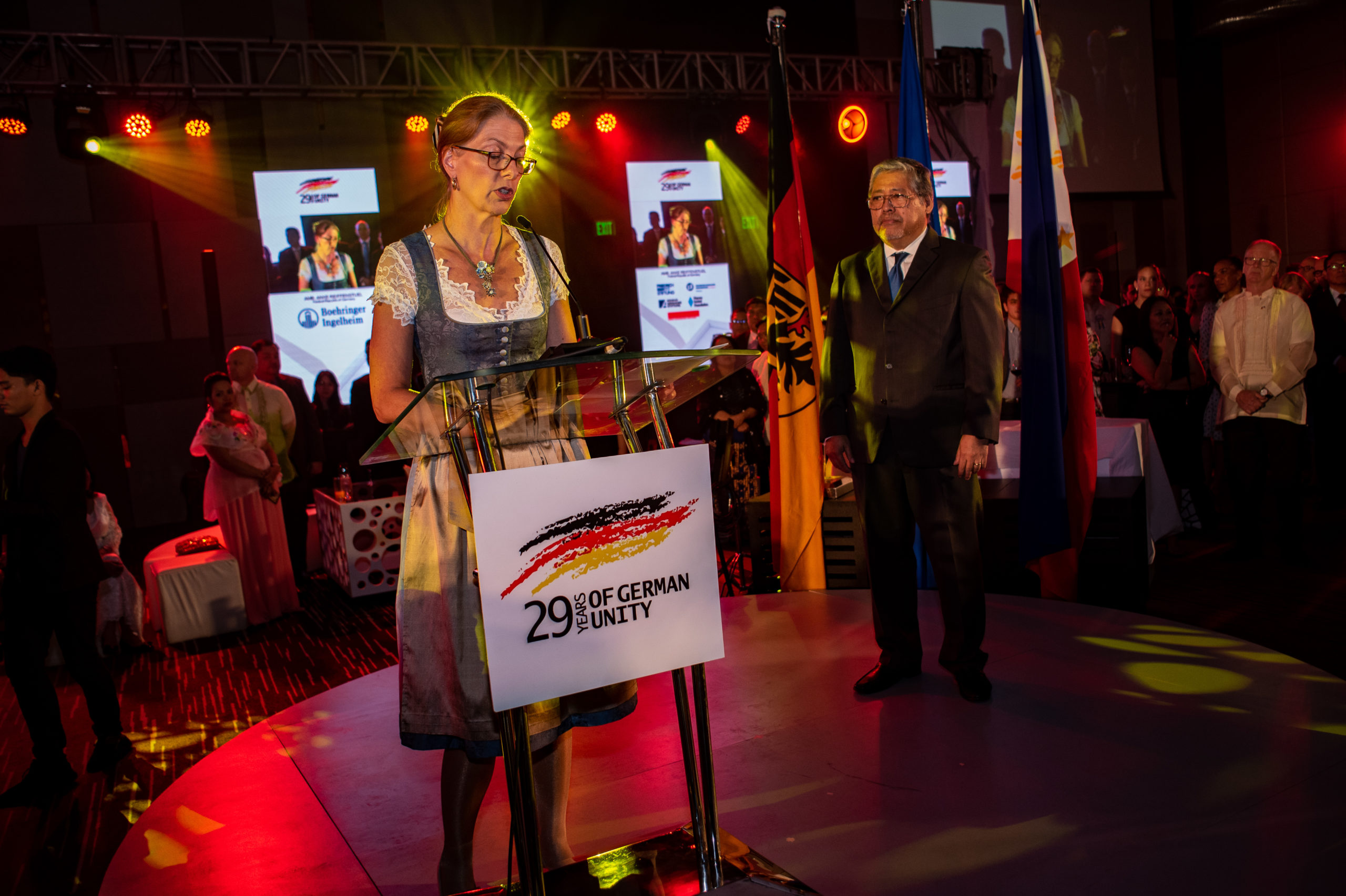 The Embassy of the Federal Republic of Germany in the Philippines celebrated 29 Years of German Unity on 03 October 2019 at the New World Makati Hotel with members of the German community in the Philippines, distinguished guests from politics, business, culture and academic circles, as well as civil society, government and the Diplomatic and Consular Corps.

Dressed in a dirndl, German Ambassador Anke Reiffenstuel welcomed everyone and – with reference to the 30th anniversary of the fall of the Berlin Wall – highlighted in her address the important role of individuals in cultivating change and nourishing relationships. German poet Johann von Wolfgang Goethe once said “Nur der verdient die Freiheit wie das Leben, der täglich sie erobern muss (Freedom and life are earned by those alone who conquer them anew everyday)”, shared Ambassador Reiffenstuel.

From the mass demonstrations in East Germany in 1989 that led to the Fall of the Berlin Wall to the inevitable reunification of East and West Germany a year after – which itself marked the end of the bipolar world created by the Cold War – Germany has since been at the forefront of international relations. With a reinvigorated economic and political strength, Germany and its people welcomed a new era committed to fostering peace and promoting democracy, freedom and human rights. With a dynamic emphasis on multilateralism and international cooperation, Germany is prepared to address the new global challenges that lie ahead.

“People-to-people contacts,” added Ambassador Reiffenstuel, “are the foundation and backbone for the strong bridges and the successful cooperation and relations between our two countries.”

Ambassador Reiffenstuel is convinced that the spectrum of German-Philippine relations is broad and will be further strengthened by cooperation between both countries. Consequently, DFA Undersecretary Enrique Manalo shared this conviction and acknowledged the strong bond between the two countries as we also commemorate 65 Years of German-Philippine Diplomatic Relations.

Guests were treated to a sumptuous buffet dinner paired with overflowing authentic Oktoberfest beer and German wine. A variety of musical performances by harpist Heloise La Harpe, the Brass Rosettes and DJ LustBass entertained the guests throughout the evening.

In the sidelines interview with THEPHILBIZNEWS, Ambassador Reiffenstuel said, “I am very happy celebrating the most important part of the German history here in the Philippines, and that is the reunification of East and West Germany in 1990. It was truly amazing that the whole world joined the jubilation but we have to to give credit and honor the people involved in the transformation will be a part of the precious history of Germany.

Last November 9, the Germans commemorated the 30th anniversary of the Fall of the Berlin Wall, and since the historic moment in the lives of the Germans and the world have dramatically transformed. Freedom has been gained back and democracy was restored have become the greatest historical event in Germany.

Consequently, Germany has itself become a strong advocate of human rights and democratic values and has proven to be a reliable and globally-oriented partner to many actors through its emphasis on international cooperation and multilateralism.