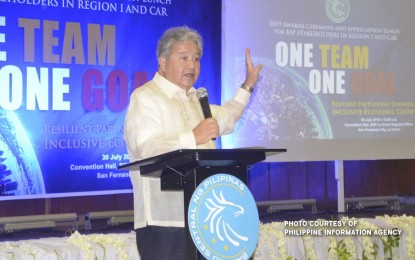 A member of the policy-making Monetary Board (MB) expects domestic inflation rate moving sideways or even drop further before end 2019.

“The inflation outlook for the rest of the year is, it will at least go sideways or lower,” MB member Bruce Tolentino told journalists in an interview after the Bankers Institute of the Philippines (Baiphil) general membership meeting in Makati City on Tuesday, October 22.

Last September, rate of price increases slowed further to 0.9 percent from the 1.7 percent last August as inflation of the heavily-weighted food and non-alcoholic beverages decelerated anew.

Among others, rice inflation, the reason for the surge of inflation rate in 2018, posted a -8.9 percent inflation last August.

The Philippine Statistics Authority (PSA) is scheduled to release the October 2019 inflation rate on Nov. 5, 2019.

The Monetary Board, in its rate setting meet last September 26, further reduced the average inflation forecast for this year to 2.5 percent from 2.6 percent previously, while it kept the 2020 and 2021 forecasts to 2.9 percent.

These projections are at the lower half of the government’s 2 to 4-percent target band until 2021.

Tolentino explained that forecast for the next two years “is there will be an (inflation) uptick” but noted that adjustments depend on developments in the Middle East and in the US.

“But we are fairly confident that we will stay within the target range at least for this year and definitely next year,” he said.

The 0.9-percent inflation rate last September “could go lower” due to base effects, he added.

Inflation peaked at 6.7 percent in September and October last year, which authorities traced to supply-side factors, particularly the rate of jumps in the prices of agricultural products, primarily rice.

In March this year, the Rice Tariffication Law (RTL) took effect and this further brought prices of rice lower.

Tolentino, in his speech during the event, said domestic rice prices are two to three times more expensive than those sold in other Asian countries like Thailand and Vietnam.

With the end of the quota system on rice importation as a result of the RTL, he said prices of milled rice have gone down by about P4-P7 per kilo.

RTL imposes a 35-percent tariff for rice to be imported from Association of Southeast Asian Nations (Asean) and 40 percent for those from outside Asean.

To protect local rice farmers, the law said a P10-billion allocation will be given for seeds, machinery, training, credit, and transition assistance to farmers.

However, some groups have denounced the RTL, with farmers saying they are on the losing end of the law because farmgate rice prices declined by about PHP7 per kilo from an average of PHP20 per kilo at the start of this year.

They have also questioned the termination of the implementation of safeguard duties against rice imports.

On Monday, Department of Agriculture (DA) Secretary William Dar said they did not violate any law when they decided not to implement the safeguard duties since this is inflationary and instead pushed for the distribution of cash assistance.

Tolentino said the government’s Economic Development Cluster will have a meeting on Wednesday and the safeguard duties “is part of the discussion”.

He added “any kind of additional tariffs will kick prices up and will add to inflation.” (First published by PNA, Oct. 22, 2019)

Managing your finances for the year ahead