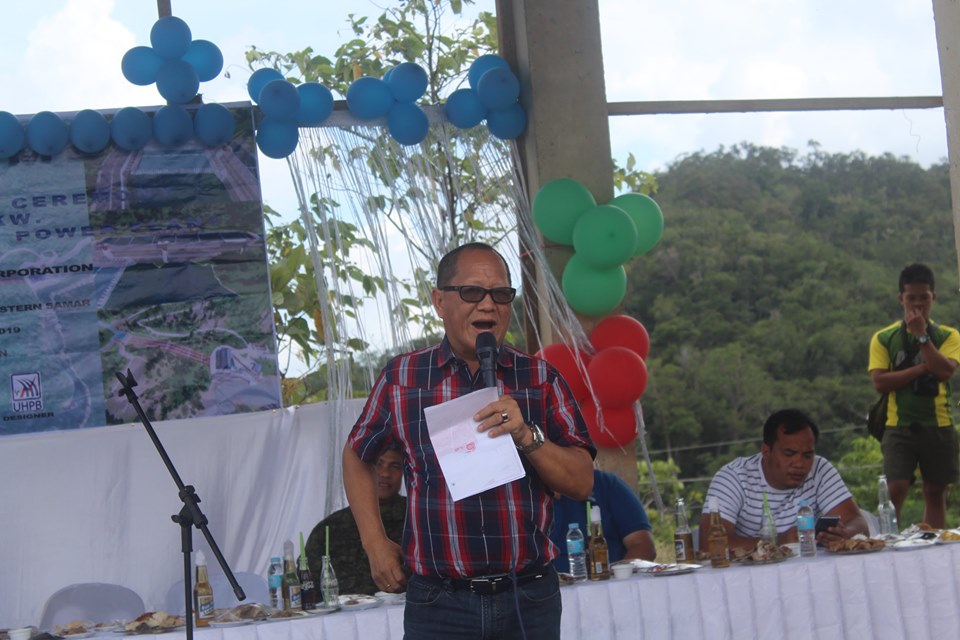 DOE Undersecretary Benito Ranque shared the enthusiasm of Pre. Duterte in his greetings to the local folks of Taft town during the groundbreaking of the Taft Hydro Power Plant that can supply 16 Megawatts of power. (Photo by Bong Moscosa via PIA)

The groundbreaking last Tuesday, October 15, signals the start of the construction of the hydroelectric power plant that can supply 16 megawatts of electricity to the locals.

The site is in the boundaries of San Rafael, Taft, Eastern Samar and San Rafael, Hinabangan, Samar.

Taft Hydro Power, a private firm reportedly did an intensive study and research on the project to generate at least 16 megawatts of power from Maharlika Falls which will use huge turbine engines to supply the needed power.

Residents of Barangay San Rafael, Taft, Eastern Samar were happy with the turn of events as there will be an economic activity with the start of the project until November 2021, its target date.

As to environmental concerns, Brgy. Captain Cabujat said that they will surely replace the trees that will be uprooted for the project.

In his message, Ranque said that it is the priority of the President to ensure that the populace enjoys low prices of power.

“There is no more transmission charge because there is no NGCP here,” said Ranque.

He added that if power is cheaper, more investors would come to put up factories that will, in turn, generate employment.

ESAMELCO Board President Renato Gerna, said that the project is a way to augment the insufficient power supply, besides the place can become a tourist attraction.

He added that the power plant is some kind of renewable energy and has no adverse effect on the environment. (First published by PIA E. Samar with Bong Moscosa, Oct. 18, 2019)

Women play a big role in the transformation of the society