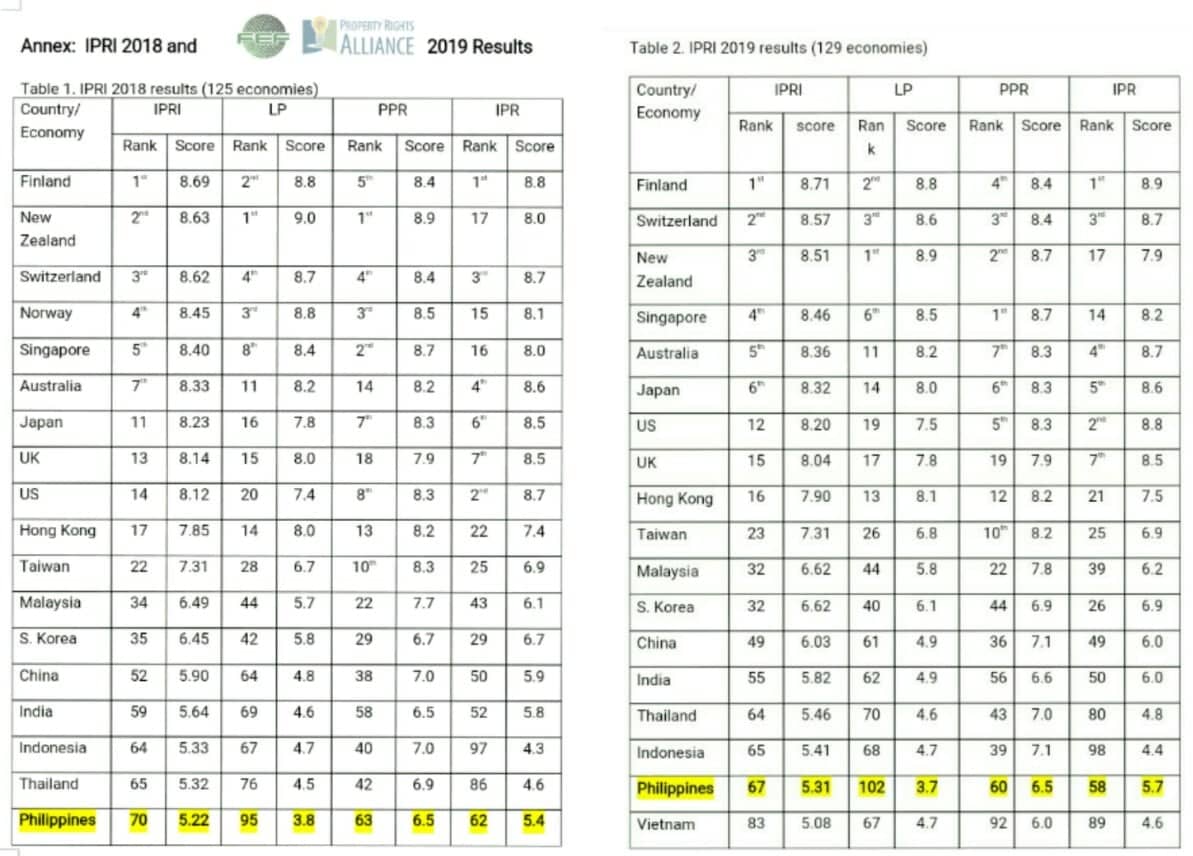 The Philippines has climbed up the 2019 International Property Rights Index (IPRI), improving to 67th place out of 129 economies from 70th spot out of 125 economies in 2018.

Input and output measurements of global economies make up the 2019 IPRI, which was released earlier this week by the Property Rights Alliance in partnership with the Foundation for Economic Freedom and Minimal Government Thinkers in the Philippines.

Property rights are a key ingredient for economic and social prosperity. “Poor property rights ecosystems,” according to economist Hernando de Soto, keep “six billion people and their $9.3 billion in capital locked out of the formal economy.”

Lorenzo Montanari, the Executive Director of Property Rights Alliance, said “property rights are human rights; without them, people are restrained in how they act, how they speak, and how they participate in the economy.”

Secure property rights have robust correlations with other indicators of economic freedom and social well-being. If people are confident their property is safe – that they can purchase, sell, and value their properties in a free marketplace – then this assurance invites entrepreneurship, reduces corruption, increases civic participation, and raises long term investment in research & development.

The Philippines was chosen for the first global launch due to the country’s rising importance in the regional and global economy with its big population and dynamic growth this decade.

In addition, some national issues in the Philippines reflect the situation in many other emerging economies such as proposals to weaken intellectual property protections in the pharmaceutical sector as well as an on-going and outdated land reform program. A focus on strengthening property rights can increase availability of new medicines, fight endemic corruption, and transform the Philippines into a modern and dynamic economy.

In Asia, increases in property rights, notably by China (36%), Indonesia (30%), and the Philippines (20%) since the Index began in 2007 have helped billions reach moderate levels of protection.

While the trade war between China and the Unites States has drawn attention to the importance of intellectual property rights, the IP gap remains the same. Western Europe and North America continue to lead the world in intellectual property protections with an average score, 39 percent greater than the rest of the world.

Closing this gap is “key to transitioning from an extractive economy to one that competes in products and services only limited by the human imagination,” said Montanari. “Too often, valuable ideas and art are stolen while governments turn a blind eye, or indeed participate” he added.