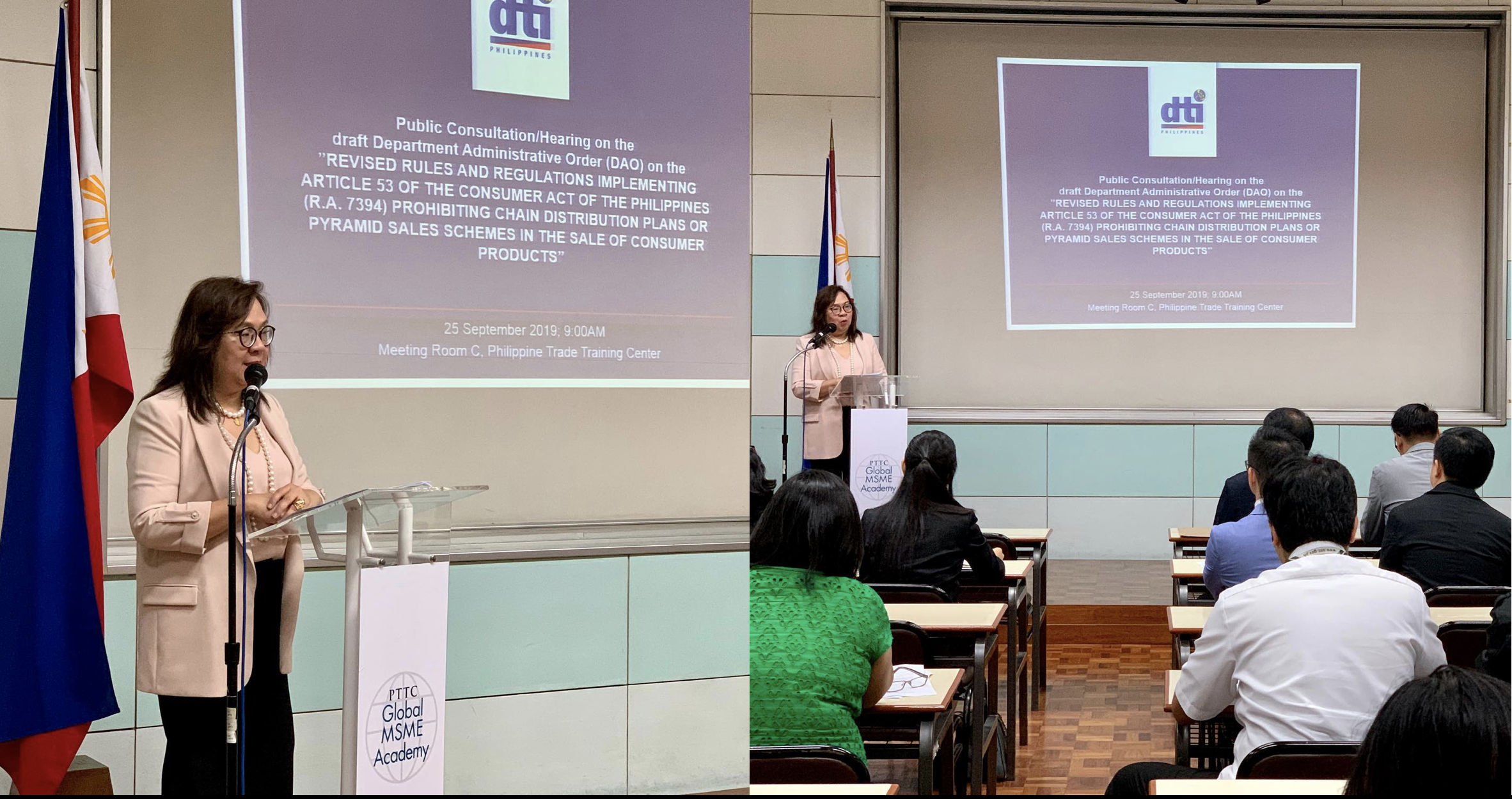 The Department of Trade and Industry (DTI) is taking steps against chain distribution plans or pyramiding sales schemes in a bid to ensure consumer protection from possible scams.

In a statement sent to THEPHILBIZNEWS last September 27, DTI Secretary Ramon Lopez acknowledged the growing number of companies and individuals involved in the business-to-consumer or B2C scheme, but underscored the need to craft greater protection for consumers.

Lopez said the DTI, through its Consumer Protection Group (CPG), started public hearings and consultations at the Philippine Trade Training Center in Pasay City for the draft Department Administrative Order (DAO) on the revised rules and regulations implementing Article 53 of the Consumer Act of the Philippines on to the prohibition of chain distribution plans or pyramiding sales of consumer products.

“Business-to-consumer engagement has been evolving drastically; and the DTI is very keen on providing the most optimum level of consumer protection regardless of the scheme used by business. The draft DAO on pyramiding provides a stronger level of protection to consumers against unscrupulous practices in the market,” he said.

Also included in the draft of the DAO is the mandatory recognition process by the DTI of any person or entity who intends to establish, operate, or advertise a legitimate direct-selling, multi-level marketing, or networking company. This recognition will be required prior to the actual operation of the company. The DTI sees this as a mechanism for consumers to easily identify legitimate business marketing schemes.

Consumer Protection Group Undersecretary Ruth Castelo explained: “The DTI recognizes the importance of updating the current rules and regulations governing direct selling, multi-level marketing, and networking activities for enhanced protection of the rights and welfare of the consumers. We have been working closely with relevant government agencies and private organizations to ensure that the new DAO is responsive to needs of current and future times.”

The public hearing was attended by representatives from various direct-selling, multi-level marketing, and networking companies, government agencies, consumer organizations, and other relevant stakeholders.

Similar public hearings will be conducted in Subic on October 9; Cebu, October 15; and Davao, October 17. The DTI is expecting to draw more input and opinions from the involved industry stakeholders before sending the final DAO for approval.

Furthermore, DTI encouraged feedback and position papers to be submitted to the DTI-Consumer Protection and Advocacy Bureau (CPAB) until Oct. 31, 2019 through email address, cpab@dti.gov.ph.

“We want to ensure that the parties involved are heard for our consideration, and by doing so, we can integrate all of these in the policies being formulated and issued by the government,” Lopez said.

MABUHAY GERMANY™ is back this 2019 reaching new heights