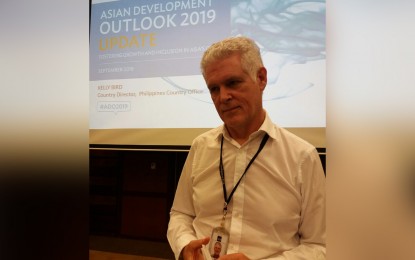 The Asian Development Bank (ADB) has slightly reduced its economic growth forecast for the Philippines for the next two years amid a slowdown in the global economy and domestic investment, even as the country remains one of Asia’s best performers.

In an update of its flagship annual economic publication, Asian Development Outlook (ADO) 2019, the Manila-based multilateral bank revised its forecast for Philippine gross domestic product (GDP) growth to 6 percent in 2019 and 6.2 percent in 2020, against its previous forecast of 6.4 percent for both years.

In a press conference on Wednesday, ADB Country Director for the Philippines Kelly Bird attributed the downward revision to slowdown in global economy and in domestic investment in first half of the year caused mainly by the 2019 budget impasse.

“Public spending should regain traction for the rest of 2019, with the government committed to catching up with its spending plans, especially as new and larger infrastructure projects get underway,” he said.

The ADB said public expenditure next year is expected to provide a further boost to the economy amid the proposed 12-percent increase in the 2020 national budget, with higher spending particularly on infrastructure, social services, and income transfers to poor households.

“Public and private investment should regain traction as new and larger infrastructure projects get under way,” it added.

The multilateral bank said the outlook for exports remains weak in light of the slower-than-expected economic growth in major industrialized economies, which are among the Philippines’ largest export markets.

The ADB further expects inflation to slow to 2.6 percent in 2019 and 3 percent in 2020, significantly lower than previous ADB forecasts, largely on improved domestic rice supplies following the lifting of quantitative rice import restrictions in February this year.

“That drop in inflation was due to better supplies of rice in the domestic market as a result of rice reforms and quantitative restrictions, but also as the monetary tightening last year starts to lower inflation expectations,” Bird said.

In the long term, Bird cited proactive policy reforms that are laying the foundation for higher growth, including the Tax Reform for Acceleration and Inclusion (TRAIN), Ease of Doing Business Act, and rice reforms, among others.