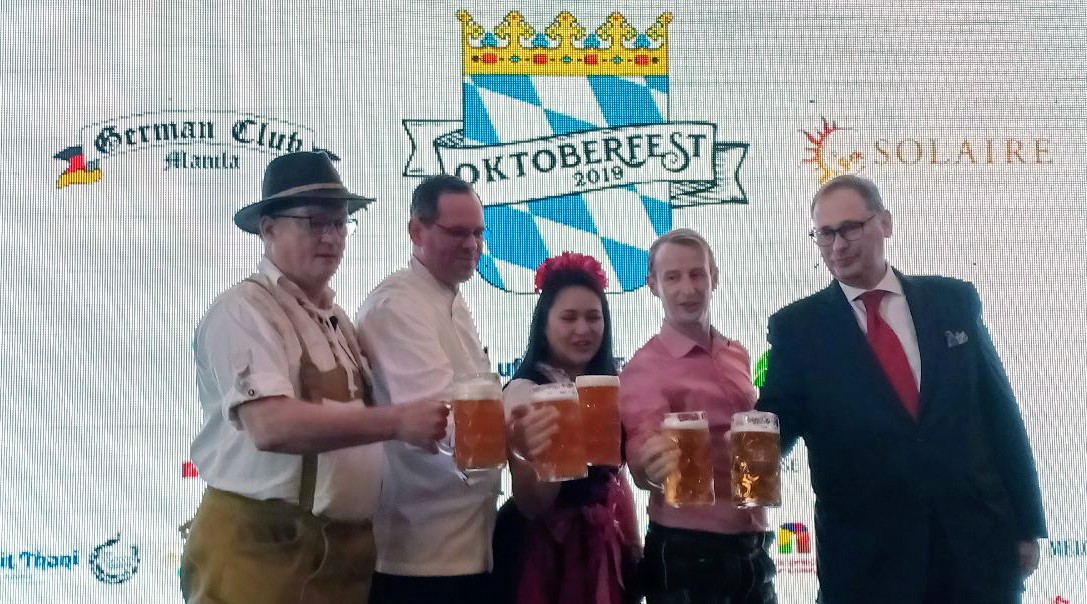 Text and photos By Monsi A. Serrano

With a promise of real feel and ambiance of how the Oktoberfest is being celebrated in Munich, Germany, Solaire Resort & Casino and the German Club Manila are teaming up once again for the 81st Oktoberfest celebration on October 17-19 at The Tent at Solaire, Pasay City.

Recently, media and special guests of the German Club Manila were given a sneak peek of this year’s Oktoberfest and what the public should expect to experience next month. Decked in true Oktoberfest fashion, Solaire’s The Forum was transformed to vividly resemble the look and feel of Oktoberfest celebrations in Munich, Germany.

Guests were greeted with sumptuous appetizers. Openers came in a basket of oven-fresh German breads and pretzels, two types of salads: Munich style sausage salad and German potato salad, and a German cold cuts and cheese platter were shared and served as conversation starters.

Like in previous years, the master of ceremonies continues to be German Club’s Michael Scheile with Eiffelene Salvador as co-emcee, who introduced the hosts for the 81st Oktoberfest.

Solaire’s Vice President of Food & Beverage Knut Becker expressed his delight in this renewed partnership. “This year’s 81st Oktoberfest will continue to be authentic and put the spotlight on the best of German culture. Following a very successful Oktoberfest celebration last year, we are thrilled to be hosting once again German Club Manila’s Oktoberfest celebrations and look forward to continuing this partnership,” he said.

Officially opening the event, Becker, Rast, and Solaire VP for Culinary Michael Dinges were invited up the stage for the ceremonial toast, followed by the lively music that signalled the beginning of the increasingly speedy tempo of the Fliegerlied, an Oktoberfest classic that brings the crowd on their feet and to the dance floor.

Dinges shared what’s special about this Oktoberfest, saying: “The German Club Manila’s Oktoberfest here at Solaire underscores authenticity. From the Weihenstephan beer, entertainment by the Bavarian Sound Express, to the homemade German sausages and delicacies from family recipes, all have their roots from Germany. Guests will receive an overflowing selection of Germany’s best tastes and flavors, surrounded by the finest Filipino hospitality.”

Newly appointed German Ambassador to the Philippines Anke Reiffenstuel graced the media launch of the Oktoberfest.

Reiffenstuel told THEPHILBIZNEWS that he felt honored to take part in this year’s Oktoberfest in the Philippines for the first time.

Lederhosen-clad gents and dirndl-wearing ladies emerged with Bavarian delicacies. A variety of sausages like the Weisswurst and an assortment of meats such as pork schnitzel, Swabian red bratwurst, Kaesekrainer and veal sausages, were presented in mouthwatering platters.

Classic desserts like the apple and walnut strudel with vanilla sauce and ice cream, and Kaiserschmarn, a dish made of shredded rum raisin pancakes with berry compote and vanilla sauce were the perfect balancer after a hearty dose of German goodness.

To show the kind of fun to be expected on the 81st Oktoberfest, guests were invited to a beer drinking game and a food relay to test the competitiveness of each player.

Groups got a kick out of the food relay game as each team raced to finish more pretzels and sausages following a heavy serving of German fare. For those who weren’t able to participate, a raffle draw for coveted prizes was held.

The 81st Oktoberfest will be a surefire hit with its knockout roster of the most authentic German dishes, and astonishing program filled with exciting entertainment.

All those interested may buy tickets for the most authentic Oktoberfest celebration in Manila by calling the German Club at 894 2899 or 818 4236. Also, book online at www.oktoberfest.ph

How we start to love ube – first eating of ube was discovered by 7,500 years ago in Ilin Island, Mindoro Occidental