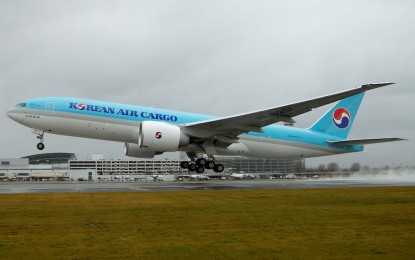 Korean Air (KE) has been boosting cargo services between Manila and Incheon, offering twice a week cargo flights due to a rise in the demand, an executive said Friday.

“KE transported 437 tons of cargo to Manila in April, when (our dedicated) freighter service has not started yet. The cargo tonnage has increased to 766 in August,” So Yeon Park, Korean Air’s Global Communication Team assistant manager, told the Philippine News Agency (PNA).

She also cited that cargo traffic between Manila and Incheon has increased by 170 percent during the past four months.

Park bared that KE first launched a freighter service to Manila in November 1989. However, due to low demand, the service was stopped in December 2016.

“Even during that period when freighter was stopped, we utilized passenger (plane’s) belly space for transporting cargo,” she added.

In May, KE relaunched its freighter services using a dedicated cargo aircraft, a Boeing 777F. This operates every Wednesday and Friday.

Meanwhile, KE has also been boosting its cargo services in other parts of Asia, increasing cargo capacity in China, Vietnam, India, and Thailand.