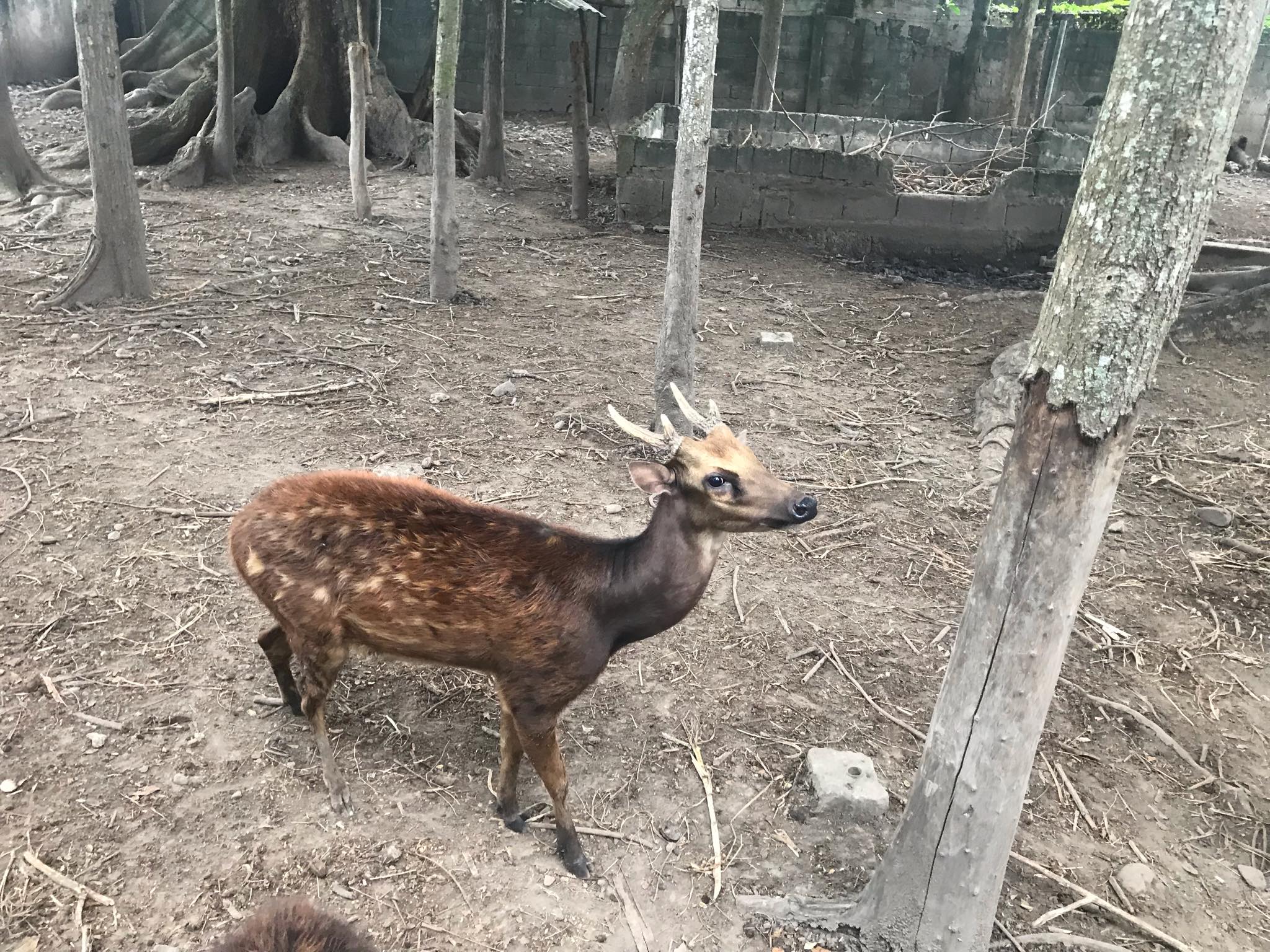 A spotted deer with antlers at the mini forest near Siliman University in Dumaguete City, Negros Oriental shows off its a-shaped spots unique to the Visayan deer. (Photo by Rebekka Volmer/THEPHILBIZNEWS)

“The deer – ah, I thought they are just brought here, by… let me think…? Maybe the Spaniards for hunting?” This is the story I often hear. The pancit was brought by the Chinese, the spam was brought by the Americans, so our deer must have been brought in by someone as well. Over centuries of tyrannies, we have become alienated from our cultural identity.

For a long time, it was thought, the Visayan spotted deer became already extinct in the wild. The species was secretly roaming in the forests of Negros. According to Dr. Robert Guino-o II, professor of biology of Siliman University, a team of Filippino and British researchers discovered evidence for the Visayan spotted deers in the National parks in Negros. In 2009 they were able to see footprints and eaten plants during an expedition to the North Negros National park. Today, we can find a few clips on the internet of rare spotting of this beautiful creature in the wild.

During my visit to Silliman, I had the opportunity to meet this unique species. The Center for Tropical Studies (CENTROP) does captive breeding as part of the Mammal Conservation Program of the Siliman University since 1987. The aim is to reintroduce the deer into the wild. The IUCN lists them as endangered species and estimates 700 matured individuals in the Wild. However, no one knows how many are still there.

When I stepped into the mini forest near Siliman University, cute, little Bambis with antlers were rushing towards me. “See, this is our challenge,” Dr. Guino-o says. “They are more like pets, how can we introduce them into the wild?” And I had to laugh. We fed them with fresh leaves since deer are typically browsing leaves from trees. However, reintroduction is important to prevent genetic inbreeding. Otherwise, a population can degenerate, no matter if we protect it from illegal hunting. This even happened in the world of humans, was the European nobility arranged marriages only within the nobility. The consequence is that in Germany, a high number of individuals are suffering from genetic haemophilia.

Spotted deer with antlers were at first a bit odd to me: Normally, deer have the typically dotted fur only when they are fawns. Once adolescent, their fur changes. However, the A-shaped spots make the Visayan spotted deer unique. They keep them until adulthood, and we have matured males with strong antlers, and a babyfur. Because they are the only deer species with such a fur pattern, they are also popular in zoos around the world. According to the newsletter of the Berlin Zoo, in Germany, about 150 individuals are estimated to be bread in zoos worldwide.

Today, the Visayan spotted deer is protected. In the very past, people in the Philippines were hunting their deer to survive. This was in the time before 12,000 years ago, when no agriculture was yet developed, and people worldwide were relying on hunting and gathering. According to a study by two archaeologists, Dr Florent Detroit from Musee d’Homme and Dr Armand Mijares from the University of the Philippines, even the famous Callao Man was consuming deer in Pena Blanca, Northern Luzon. By around 67,000 years ago, people were bringing their prey to the cave for their family dinner. In younger periods, deer becomes more sparse and people were shifting to wild pigs, and finally started to the domestication of chicken and wild boars.

But Callao is not the only archaeological site with remains from deer. The Neolithic site of Nagsabaran in Luzon also have a lot of bones from hunted deer. According to a study by Dr Noel Amano, a Philippine Archaeologist work at Max Planck Institute in Germany, people were favouring deer from young till old ages.

And the pattern continues: archaeological sites from Palawan, Luzon and Mindoro all show the same sequence: earliest humans were hunting deer in the Philippines. Dr. Philip Piper, Professor for Archaeology at the Australian National University, says that people in the Philippines were not only living on deer, they probably also used their skin: cut marks at some of the points are typically for skinning.

Oldest deer bones in the Philippines are dated to 709,000 years falling into the Ice age period. This is the result of a study headed by Dr. Thomas Ingicco who is the former head of the zooarchaeological laboratory at the University of the Philippines. These bones are from times when the Visayan spotted deer was not yet developed. But it might have been ancestral to the deer roaming the Philippines today. These were times before colonisation started. The times, when the culture was still the natural consequence of humans dealing successfully with nature – and our unique deer was playing a big role in the success of Philippine culture.