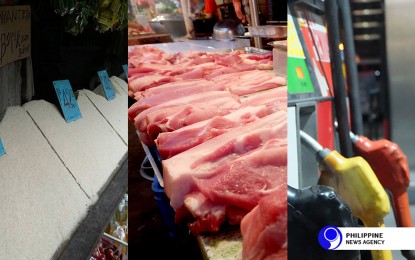 Rice and meat prices remain stable even as gas prices stayed the same this week with no adjustments. (Photo collage by PNA)

The country’s inflation rate further eased to a 31-month low at 2.4 percent in July as food prices continued to soften, boosting expectations of continued deceleration.

“Our expectation is that it will continue to go down or at least stabilize at this number in the coming months,” Mapa said in a press briefing on Tuesday.

He said the main driver in the downtrend of inflation in July 2019 was the heavily-weighted food and non-alcoholic beverages, particularly rice; corn; oil and fats; vegetables; sugar, jam, honey, chocolate and confectionery; and food products.

The share of this commodity group to the overall inflation was 31.6 percent.

Mapa also attributed the slowdown to housing, water, electricity, gas and other fuels; and transport.

He said indexes of clothing and footwear and education accelerated last month.

Mapa said a downward trend in inflation in the National Capital Region (NCR) was posted in July 2019, as it recorded a slower annual increase of 2.3 percent from 3 percent the previous month.

How did Guiuan get back on its feet after Yolanda?