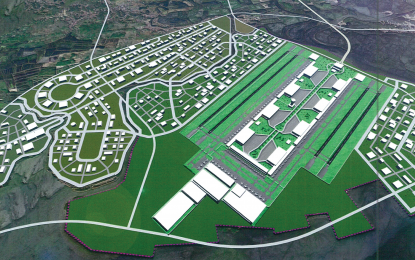 THE NEW MANILA INTERNATIONAL AIRPORT. The design of the planned PHP735.6 billion airport to be built in Bulacan by San Miguel Holdings Corporation. (Photo courtesy of DOTr via PNA)

The New Manila International Airport (NMIA) in Bulacan set to be built by San Miguel Holdings Corporation (SMHC) this year will be the company’s “single biggest investment” in the Philippines.

In a statement released on Wednesday, SMHC president and chief operating officer Ramon Ang said the NMIA, with a build-operate-maintain contract worth P735.6 billion, is a “landmark Filipino project” with all costs shouldered by the firm.

“It is a landmark Filipino project that will be built at no cost to government and with no subsidies or guarantees of any kind,” Ang said.

The airport is seen as a long-term solution to the country’s air and land traffic woes.

“What we hope to build is a long-term solution—a sustainable and world-class Philippine gateway with enough runways and facilities to meet current and future needs,” Ang said.

Part of the NMIA’s contract is an 8.4-kilometer tollway connecting the airport to the North Luzon Expressway (NLEX) in Marilao, Bulacan, which would link the airport to Metro Manila with ease.

Aside from providing thousands of jobs, the project was said to boost the local economies of Bulacan and neighboring provinces, as well as the country’s status as an investment and tourism destination.

“It will raise our country’s profile and competitiveness as an investment and tourism destination, and help boost our local and export industries,” Ang said.

The NMIA is said to be operational within four to six years from the start of its construction this year.

“We still have a long way to go, but with the continued support of government and everyone, we hope to get started working right away,” Ang said.

The Swiss challenge for the airport was concluded yesterday (July 31, 2019) and the notice of award is set to be given to SMHC after no other bidders sent a proposal to challenge the original proponent.

Designed to have a capacity of 100 million passengers per year, the NMIA can later be expanded to 200 million and is projected to have 240 aircraft movements per hour using its four parallel runways. (First published by PNA, Aug. 1, 2019)

Portion of Cavite-Laguna expressway to open next month

EU Delegation to the Philippines statement following the twin blasts in Jolo, Sulu