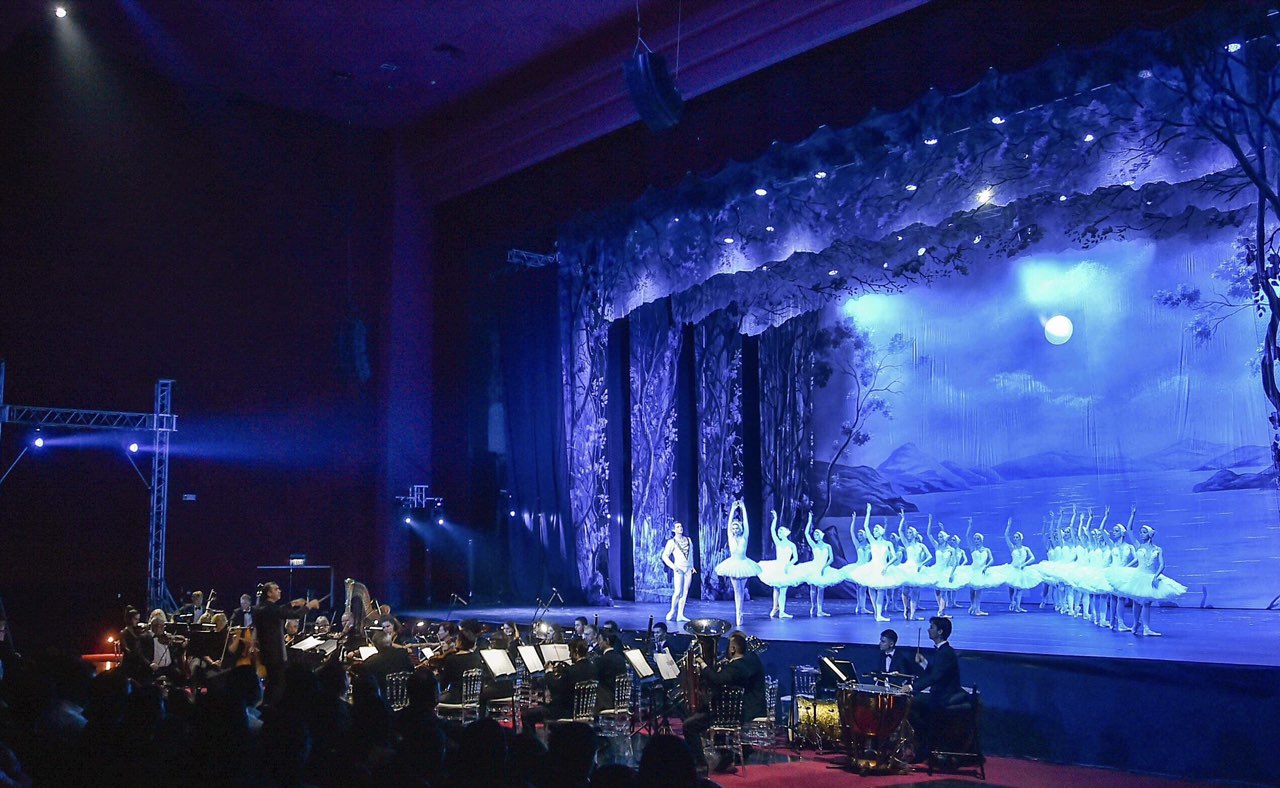 The breathtaking ‘Swan Lake’ runs
at the New Frontier Theater

The first night elicited a standing ovation and cheers of “bravo!” from the well-dressed audience. It a stunning first-time performance of the Bolshoi ballet company “La Classique” at the historic New Frontier Theater (NFT), a classic landmark of the ‘60s that has since been transformed from what was once the biggest cinemas in the country where glitzy movie premieres were held into today’s multi-purpose performing arts theater.

It was only fitting that one of the most iconic performances, Tchaikovsky’s ballet “Swan Lake,” would be held at the NFT. The gala premiere audiences were mesmerized by the grace and precision of movements by Oksana Bondavera (Odette/Odile) and Bolshoi ballet star Alexander Volchkov (Price Siegfried). Bondavera shares the dual lead role with Bolshoi ballet’s Anastasia Goryacheva.

Composed by Russian genius Pyotr Ilyich Tchaikovsky in 1876, it depicts the story of Odette, a princess who was turned into a swan by an evil sorcerer. She embarks on a quest for true love to turn back the curse and defeat evil.

The black and white Gala night was attended by a number of celebrities and high profile guests.

Tessa Prieto Valdes, who came in black complete with extended eyelashes and a matching headdress, told NFT FB page, “Every minute of the whole production is just incredible!”

“I think it’s a show that everybody should watch; it has something for everyone,” Maritoni Rufino Tordesillas also said in an interview with the NFT’s social media page. Ms Tordesillas would know best about the ballet because she had performed the lead in Philippine Ballet Theater’s presentation of “Swan Lake” in 1994.

Rubylee Gomez of Ballet Philippines calls it “a balletomane’s treat! The company and the orchestra put together a performance worth watching again.”

Choreographed by Marius Petipa & Lev Ivanov, the Moscow Ballet “La Classique” production of “Swan Lake” is accompanied by the Russian Symphony Orchestra, under the baton of conductor Yaroslav Tkalenko.

A timeless story told through the grandeur of ballet, “Swan Lake” becomes even more breathtaking because of the live symphony music. Imaging hearing the famous main theme performed live by the incomparable Russain orchestra while the best of the Bolshoi ballet company perform the classic piece. It simply cannot get more spectacular than that!

“Swan Lake” is the first time that a ballet performance this extravagant was staged at the New Frontier Theater.   Considered as the premier performing arts venue in the country, the New Frontier Theater has seen various transformations over the years.  It started out as the top choice for movie premieres in the 1960s, and has evolved into a 2,385-seater ultra-modern venue and entertainment landmark.

It has staged numerous concert performances from local stars such as Regine Velasquez, Gary Valenciano, Sarah Geronimo, Ogie Alcasid, Martin Nievera and Lani Misalucha, and international acts such as Fifth Harmony, A1, Slayer and Charlie Puth and the fan meets of Korean idols Dara, Nam Joo Hyuk, and So Ji Sub, among many others.

“Swan Lake” is on its last few dates at the New Frontier Theater from June 19 to 21 at 8 pm; and on June 22 at 2pm and 8pm. Tickets are available at Ticketnet outlets. The public may also order tickets online via www.ticketnet.com.ph or call 911-5555.

Mastercard credit card holders can avail of a 10% using the promo code MC10SWAN. This offer is available for transactions online or all Ticketnet outlets, and will last until June 22, 2018 (DTI-FTEB Permit No. 8935 Series of 2019).