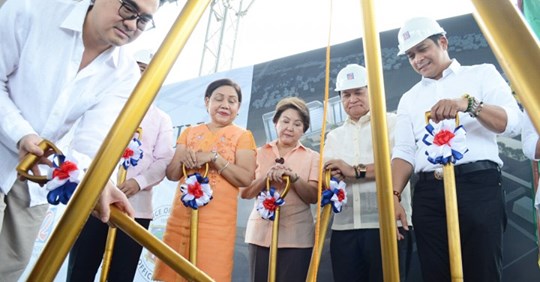 Bulacan officials led by Gov. Wilhelmino M. Sy-Alvarado (second from right) are joined by Sen. Cynthia Villar in the groundbreaking at the site of the soon-to-rise Bulacan Cyberpark and Business District in Malolos City on Wednesday, June 12, 2019. (Photo by PNA)

A 12-hectare business district, which is seen to provide job opportunities not only to Bulakenyos but also to residents from nearby provinces, will soon rise in Malolos City, capital of Bulacan.

The soon-to-rise business district, which is located in Barangay Bulihan this city, will have deluxe hotels, convention center, shopping malls, and business process outsourcing (BPO) buildings.

In her message, Villar congratulated the provincial government of Bulacan and RLC for the project that will be beneficial to Bulakenyo businesses and entrepreneurs.

Alvarado, for his part, expressed his elation over the realization of his dream for the province of Bulacan that he believed will be continued by Governor-elect Fernando.

“This is the beginning of freedom from poverty. This project will be beneficial especially to our poor people,” the governor said.

Meanwhile, Go said he is grateful to be a partner of the province of Bulacan in a world-class and mixed-use development that will be put up in the province.

“The BPO buildings will attract American, international business process outsourcing companies such as call centers, transcription companies, and third-party BPOs that will provide thousands of jobs to the people of Bulacan. If I say, these are not ordinary jobs because the jobs the BPO industry provide are high paying jobs. These are the kind of jobs that help our people create more skills,” Go said.

Implemented under the Bulacan Public Private Partnership Code through Provincial Ordinance No. 18-2015 and its corresponding implementing rules and regulations, the project is one of the program initiatives under the Bulacan Program for Rapid Industrialization and Development (PRIDE) — an economic program of the province that envisions to transform Bulacan into an engine of economic growth. (First published by PNA)