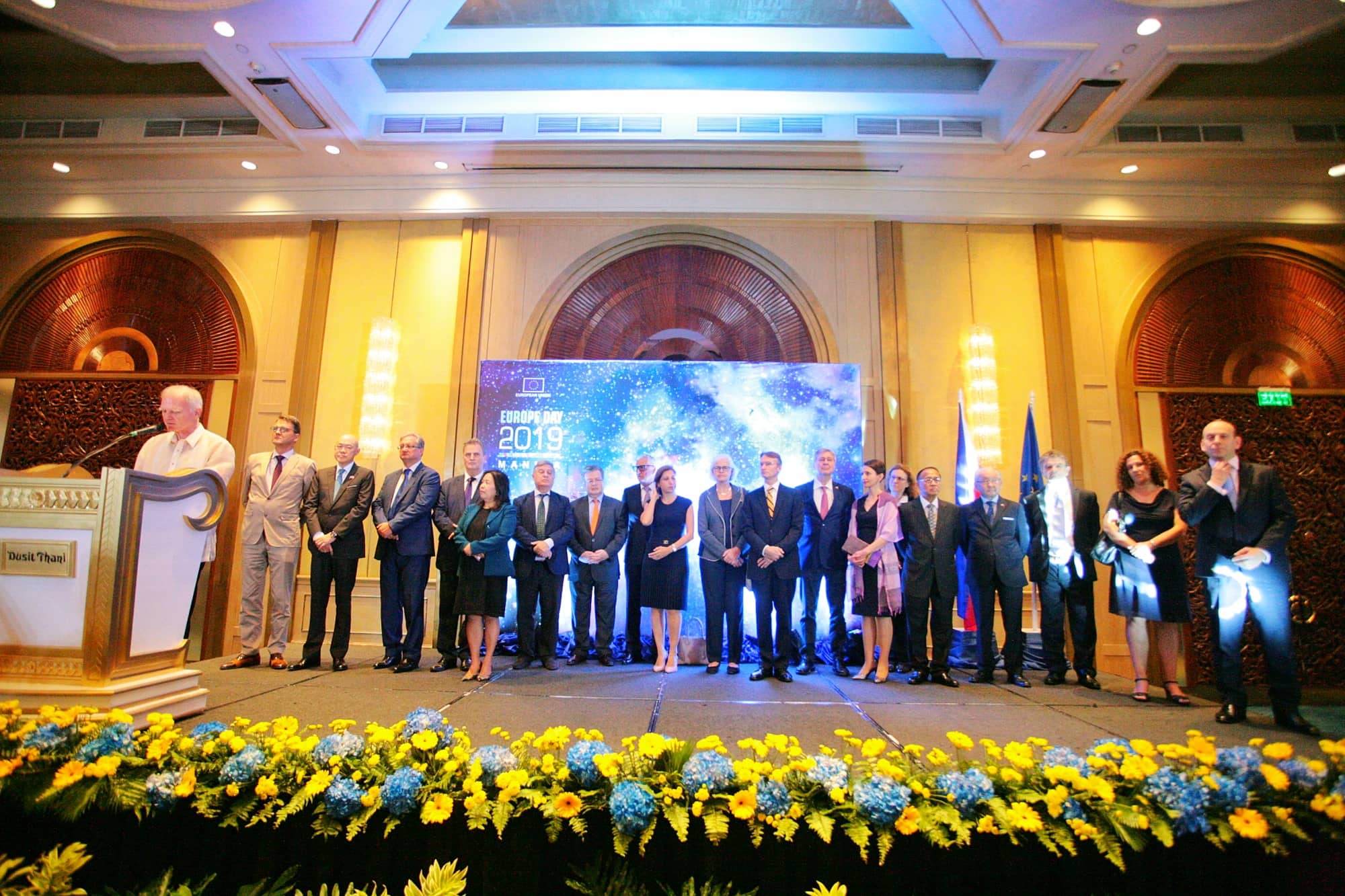 His Excellency EU Ambassador to the Philippine Franz Jessen reading his speech during the Europe Day 2019 Photo From THEPHILBIZNEWS/By Monsi A. Serrano

EU commits to support PH government
Text and Photo by Monsi A. Serrano

His Excellency Ambassador Franz Jessen, head of delegation of the European Union (EU) to the Philippines, has reiterated the EU’s commitment to support the Philippines at the 4th Europe Day celebration at the Dusit Thani Hotel Manila in Makati City.

Amb. Jessen recalled that since his arrival in the country in 2015, three new EU diplomatic missions have been established and these are that of Hungary, Poland and Sweden. Their inclusion now brings to 15 the number of diplomatic missions from EU Member States (MS).

“The EU business community in the Philippines continues to do good work, in their own interest and in the interest of the country. Throughout his time as EU Ambassador to the Philippines, we are delighted and honored to work with not only the ECCP, but also the national chambers of commerce within the EU family and the Philippine business associations wherein the business communities are doing a fantastic job in bringing us closer together,” said Amb. Jessen.

While he acknowledged that there were some differences with President Rodrigo R. Duterte, the head of the EU delegation described his four-year stint in the Philippines as “happy times, interesting times and occasionally challenging times.”

In an attempt to defend the EU when President Duterte snubbed the Asia-Europe Meeting in October last year, Jessen said: “The EU, the world’s second biggest economy and the biggest trading power in the world, is a staunch promoter of the international rules-based system. The rule of the strongest is not for us. Within the EU, we work things out between Member States through shared objectives, negotiations and agreements. Our companies work within the existing regulations written jointly by 28 MSs. They don’t work to the drumbeat of the strongest.”

“Outside the EU, we promote a similar rules-based model. We have 140 missions across the world that are all engaged in promoting cooperation within the international rules-based system – be it security cooperation, cooperation on global issues such as climate change, economic cooperation, we seek to promote mutual interests based on mutual respect,” he added.

He said that one of his biggest pleasures was to witness how the Filipinos appreciate this EU model; and proof to this is the 800,000 Filipinos living in the EU, and the 300.000 Filipinos seafarers working on EU flagged ships.

His last EU Day in PH

At one point of his speech, Amb. Jessen expressed sadness as he cited the occasion as his last EU Day celebration in the Philippines, explaining why he has really devoted his time to reach out and join various EU activities in the country.

The EU Ambassador also narrated that since he assumed as the EU Ambassador to the Philippines, it was his privilege to have been working with 15 national colleagues and their staff here in Manila and despite the diversity, they remain strong their internal discussions with issues are lively and exciting given the fact that there are 14 different angles to look from.

Given that fact of their situation, Amb. Jessen pointed out that one of his roles is to draw the comprehensive picture when presented with the 14 angles and this is always fascinating. He also greatly appreciated the efforts of his team from his own staff and colleagues who remain committed to bringing the EU closer together and closer together with the Philippines.

Looking forward, the EU Ambassador commended the government for ratifying the Partnership and Cooperation Agreement (PCA) as this would pave way for a smoother and stronger ties and cooperation between Philippines and EU on political matters, justice and security affairs, trade and investment, migration, and other economic development and sectoral issues.

He noted that the signing of the PCA as a manifestation that the country can still do better, and that in the years to come both Philippines and EU will fully and mutually benefit from their many shared interests.

The EU Ambassador is also elated that the EU has appeared in headlines here in Manila during the past year more and more frequently – an indication that the EU is welcome and the increased awareness of the values for which the EU stands for.

“We are proud of our values, we don’t impose them on any partner, and we don’t hide them”, the EU Ambassador added.

In a special way, Amb. Jessen share his observations of the young generation of Filipinos on whom he puts so much hope and confidence being ambitious, increasingly better educated and tech savvy that will spell a big difference as they join the job market in the years to come.

A toast to Duterte

Lastly, the EU Ambassador reminded the Philippine government of its task to unleash this great potential and assured that EU continues to stand ready to work with the Philippines, with President Duterte and his government to make this potential realized and the transformation to happen now that would create positive impact and mutual growth for both the European Union and the Philippines.

During the toast, Amb. Jessen offered it to President Duterte and wished him success, good health and a long life.