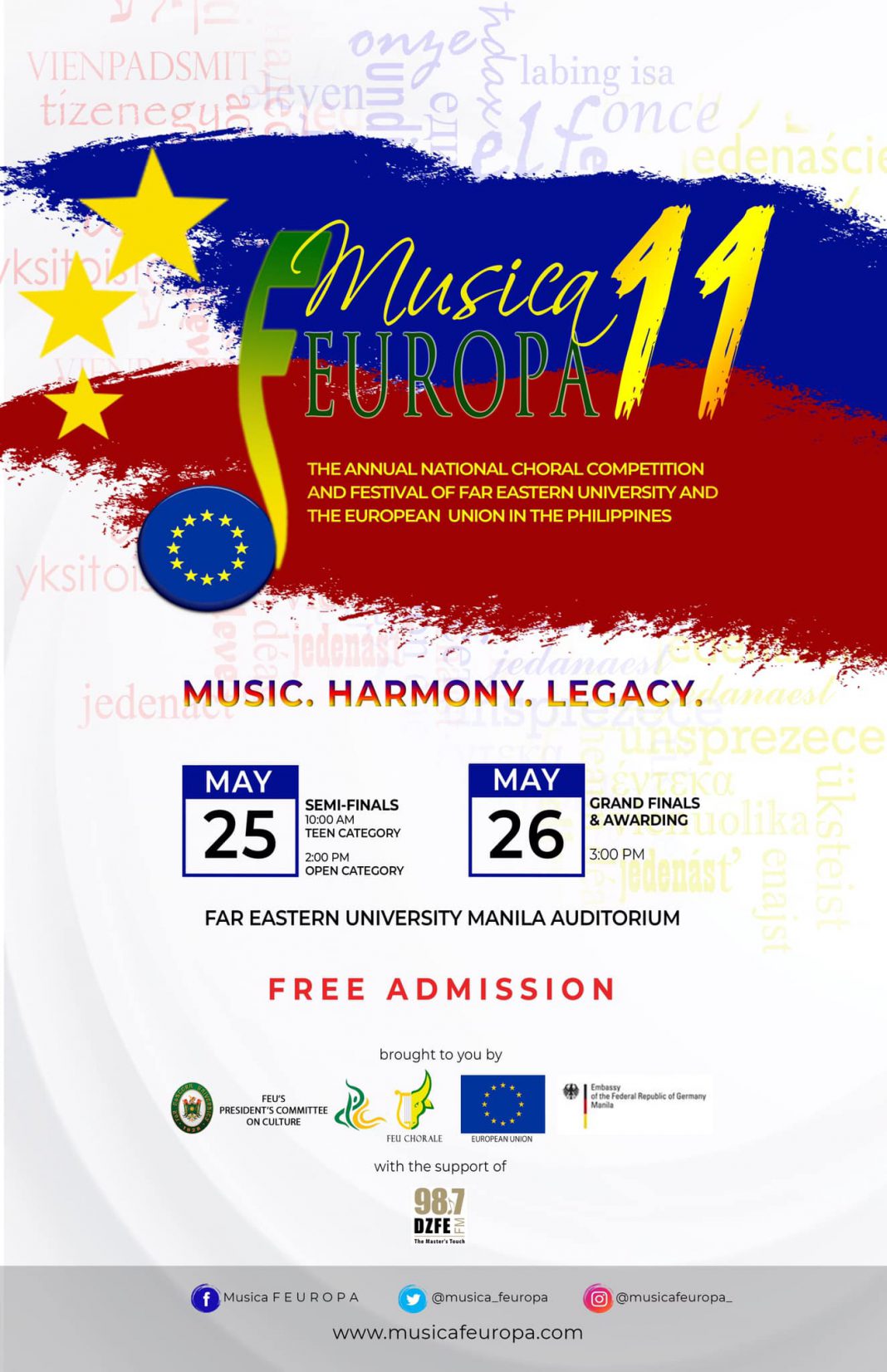 Musica FEUROPA, Far Eastern University’s annual choral competition and festival with the European Union in the Philippines as its principal partner, grows in size and stature every year. The key criterion of Musica FEUROPA is that each choir has to perform two songs: one song of their choice written in an official European Union language, and one piece written in any Filipino Language. From just four choirs in 2009 mostly from the City of Manila, the number rose to an all-time high of thirty-one choirs hailing from all over the Philippines. What used to be a competition for college choirs expanded to two categories: High School and Open including but not limited to university, church, company, government and other ensembles. Musica FEUROPA has become one of the definitive choral competitions in the Philippines.

As Musica FEUROPA begins a new decade, some notable changes will be implemented to intensify the competition.  The High School Category expands to a Teen Category to include youth between thirteen and nineteen years of age. Like last year, the top three finalists of each category will compete for the title of Grand Champion. Also, the tutti finale of the European Union Hymn will be sung in German. Saunder Choi, an acclaimed Filipino composer was commissioned for a competition piece to be performed in the Grand Finals. The piece entitled “El Vasto Mar” will convey how music can serve as a universal language to promote and sustain unity, peace and harmony among different nations. The text of the piece is lifted from Sampaguitas Y PoesiaVarias, written by Pedro Paterno.

This year, ten (10) choirs from the Open Category and five (5) from the Teen Category will compete in MusicaFEUropa 11. The winner will be determined by esteemed Filipino choral conductors and clinicians. The semifinalists from the Teen Category will be adjudicated by Arwin Tan, Rodolfo Delarmente, and Maria Theresa Vizconde-Roldan, while Lester Delgado, Jude Roldan, and Emmanuel De Leon, Jr. will adjudicate the Open Category. The Grand Champion will be decided by Prof. Fidel Calalang, Jr., Dr. Beverly Shangkuan-Cheng, Dr. Ed Manguiat, Ma. Lourdes Hermo, and Ramon Lijauco, Jr.

The Grand Champion shall take home PhP 100,000.00 and a trophy. The First Runner Up and Second Runner Up will receive PhP30,000.00 and PhP20,000 respectively, together with a trophy. A consolation prize of PhP10,000.00 will be given to the remaining grand finalists.

Musica FEUROPA 11 will be on May 25 and 26, 2019 in the recently retrofitted Auditorium of Far Eastern University, Manila. Free tickets may be downloaded from Ticket2Me, a ticketing app available for download in the App Store for iOS or Google Play for Android devices.

Musica FEUROPA 11 is also brought to you by 98.7 DZFE, our official media partner, and the German Embassy Manila