BOI investments reach Php243B in the first quarter, up 60% year-on-year 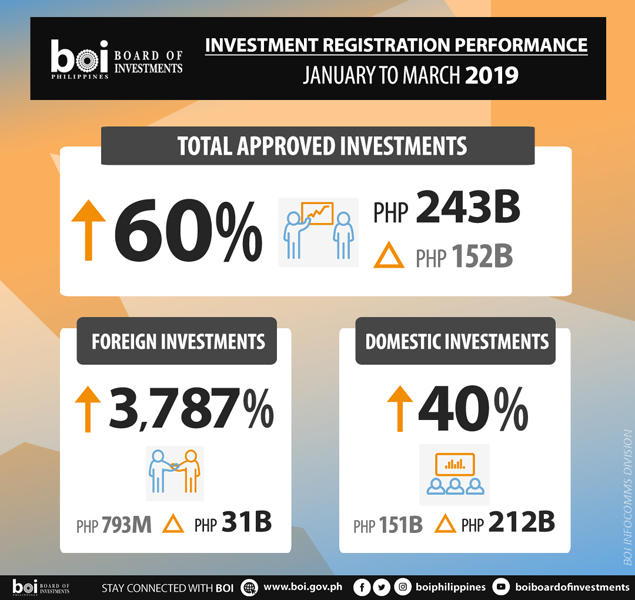 Total investments approved by the Philippine Board of Investments (BOI) posted a 60 percent increase for the first quarter of 2019, reaching Php243 billion, compared with the Php152.1 billion posted for the same period last year. This marks a solid recovery from the 23 percent decline for the January to February period.

Of these, investments from foreign sources continued to lead in terms of growth rate with a jump of 3,787 percent, from only Php792.8 million in the first quarter last year to Php30.8 billion this year. In terms of actual levels however, domestic investments still contribute the largest share with Php212.2 billion for a 40 percent increase from last year’s Php151.3 billion.

“After generating a record-breaking Php915 billion in approved investments last year, we are still sustaining the momentum this year due to steady,strong and positive investor sentiment here and abroad. The upside trajectory for approved foreign investments continues to surge, following the 378 percent increase recorded in 2018 which saw FDIs approved by BOI reaching Php104 billion from just Php21.7 billion in 2017. We expect the growth to continue for the rest of the year as we aim to approve at least Php1 trillion in total investments,” Trade Secretary and BOI Chairman Ramon Lopez said.

Trade Undersecretary and BOI Managing Ceferino Rodolfo emphasized the stringent evaluation process these projects undergo, prior to extensive deliberations when these are taken-up by the BOI Board of Governors for decision. “For the power projects for instance, aside from technical and financial assessment and demand gap evaluation, we require positive official endorsement by the Departments of Energy and of the Environment and Natural Resources. We also require the proponents to commit to emission standards which are very much stricter than local and international requirements. Failure to meet these commitments would mean forfeiture of incentives,” he said.

Region IVA received Php162 billion of the investments; while Region III came in second place with Php25.9 billion in investments and the National Capital Region came in only as third placer with Php6.1 billion worth of investments.