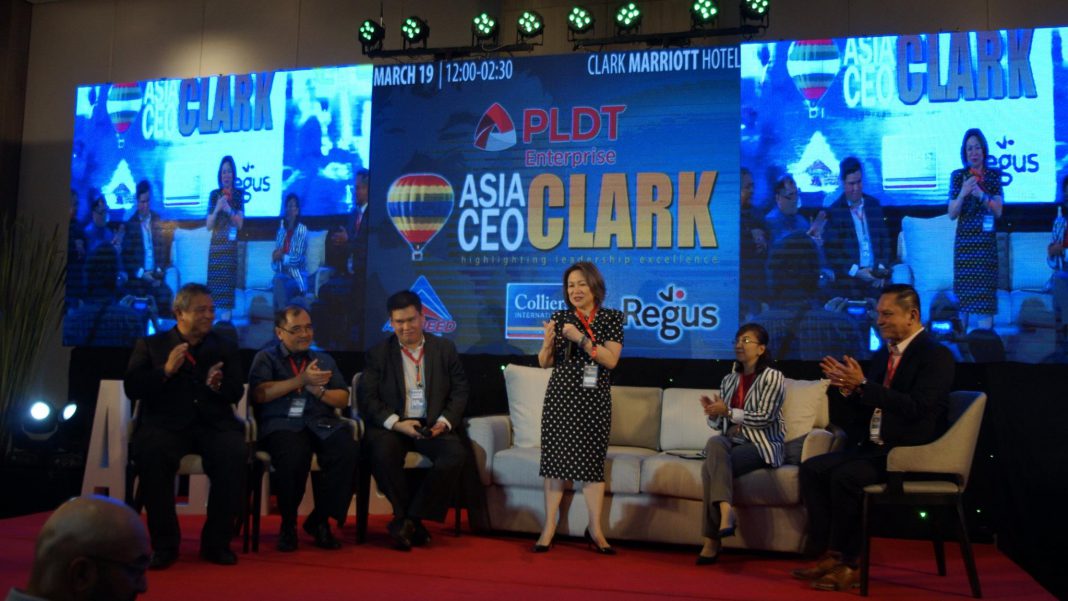 Clark Global City rolls out grand development plan at the ASIA CEO Clark
Text and Photo by Monsi A. Serrano

CLARK, Pampanga — True to its commitment to showcase the Philippines as a prime business destination, the ASIA CEO Forum gathered all the stakeholders in the talk-of-the-town transformation of Clark Global City.

Held last March 19 at Clark Marriott Hotel, the speakers presented the ambitious plan to solve the traffic gridlock in Metro Manila and options for investors at the Clark Freeport Zone in Pampanga.

Dubbed as the best global city in the Philippines, the integrated and well-planned development of Clark Global City will be a one-stop-shop sans the traffic of Metro Manila. This is to entice more investors to consider Clark as an alternative business destination complete with hotels, residential houses, schools, and hospitals. BPO hubs and all the peripheral facilities to support them are also there.

This was revealed by Joey Bondoc, Head of Research, Colliers International Philippines that Pampanga will become a hotbed for condominium development especially the Clark area due to more pronounced development as well as decentralization and improving infrastructure, fueled by demand for a live-workplay lifestyle, and developers are highlighting their differentiating features.

He also added, “That Infrastructure wise, it traverses through the portions of Clark and Mabalacat in Pampanga and Capas in Tarlac. The initial developments will include two universities, 20-megawatt solar farm,  25-hectare mixed-income housing for industrial employees and Filinvest’s 100-hectare industrial park.”

Francis Ceballos, Senior Vice President and Cluster Head of Filinvest Land, the developer of New Clark City in which there is a joint venture between the Filinvest-BCDA, said the roads that will run through New Clark City are wide enough for several vehicle lanes would certainly ease mobility in, out, and around the business center.

The New Clark City has a vast land being developed with approximately 9,450 hectares that could accommodate up to 1.2 million people.

For her part, Eva Tejada, Vice President for Business Development and Business Enhancement Group of Clark Development Corporation (CDC), presented the huge potentials of Clark even as it is just starting to push through with its plan.

“There will be several hotels to be built, retail shops and recreational parks, too. It will be the next ‘paradise in the city’ of the Philippines and we take pride that we never asked any fund from the government in the development of Clark Global City,” she added.

“If you want to have a less stressful life – no flood, no traffic – and all the amenities one will look for, move to Clark and see the big difference,” the CDC official said.

“We really made sure that the development has been carefully studied. We learned from the past mistake of Bonifacio Global City in Taguig City, wherein the traffic becomes horrendous during rush hours,” she added.

I believe the quote attributed to me was not made by me.  I did not make any comparisons with BGC as our development and BGC’s are very different.  Not my place as well to comment on BGC’s infra. Can you please issue the proper clarifications in this regard?

Meanwhile, Frank Villanueva, Clark Investors and Locators Association president, sees Clark not just as a Green City, but as the future economic hub of Central Luzon, being the first-ever smart and disaster-resilient city in the Philippines.

“Given the fully-integrated plan, we are very confident to entice more investors from various industries and countries such as BPO, manufacturing, logistics, retail, and many more. Therefore, Clark Green City is considered the natural hub for economic development north of Metro Manila,” said Villanueva.

“It’s a world-class infrastructure that Clark brandishes to the world. We have many human resources to support whatever business they will venture here at the new investment hub of Central Luzon. We also take pride of having one the largest aviation complexes in Asia. With Clark’s modern highways connecting it north, south and to the massive Subic seaport. Modern rail links are in advanced planning stages, everything you need for your business to grow is here,” he added.

Dick Perez, Corporate Relationship Management head of PLDT SME Nation, assured that PLDT is ready to provide the connectivity that would complement the grand development plan for Clark Global City.

“A part of Metro Manila still uses copper for their Internet cable. Here at Clark, everything will be fiber optics and this will certainly put a smile on the face of the users, whether residential or business user,” he added.

For more details on the ASIA CEO Forum, its event at Clark as well as future events, visit  https://www.asia-ceo.org/

The Philippine Business and News is a proud acclaimed media partner of Asia CEO Forum and Asia CEO Awards.