Nikka Whisky: A Love story that yielded a “Perfect Blend”

In celebration of Valentine’s Day and while I am here now in Hokkaido, Japan I bumped into a compelling love story that is not just heartwarming but also had a happy ending.

While Valentine’s Day has a Western Christian origin, the celebration cuts across the world and remains significant in the cultural, religious, and commercial celebration on and about love.

Unlike the Romeo and Juliet of William Shakespeare that ended up in a tragedy, this story of eternal love and till-death-do-us-part of Masataka Taketsuru, a Japanese and Scottish wife Jessie Roberta also known as Rita goes beyond the love story as their love yielded into something that gives another honor to Japan and something that still commemorated even if they are both gone here on earth.

As the young people in the Philippines would always say, “Walang forever” (There is no forever in love or relationship), the Taketsuru couple proved that there is forever even if they are already gone as their legacy is perpetuated and celebrated until now (and forever).

The young visionary Masataka dreamt of making something special for the Japanese, a whisky that they can call their own which is also processed in Japan. While the Taketsuru family is known for brewing’s sake during their time, it is obvious that it is already in his DNA of Masataka being a chemist.

But knowing that having the chemist in his genes, Masataka knew that even if he graduated and majored in brewing at Osaka, that was not enough to make his dream come true to have a distinct Japanese whisky. Therefore, he went to Scotland and enrolled in the University of Glasgow and majored in chemistry.

Smart that he is, he took advantage of the opportunity by working as an apprentice at the Longmorn Distillery, one of the first and famous distillery companies in Scotland, and later on in James Calder and get all the necessary skills that he needed to slowly build the foundation of his dream of coming up with a whisky made in Japan. 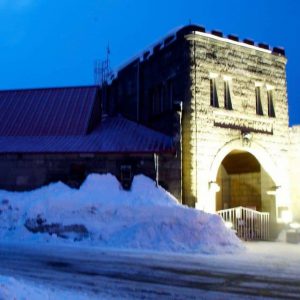 The Castle-like facade of Nikka Whisky Distillery in Yoichi

During his stint in Scotland, fate has prepared something for him and there he met his lovely wife Rita and married her eventually over a simple ceremony in 1920 despite opposition from family and neighbors who disapproved of their interracial marriage.

While they are already married, Masataka’s unequivocal passion continued as he also took an apprenticeship job at Hazelburn Distillery and learned the process of making malt whisky and blending before returning back to Japan.

Perhaps feeling that he is ready to take the plunge and kick off his dream of starting his pet project which he will embark in Japan, Masataka couple decided to move out of Scotland and resumed his job at the company where he had worked for.

But it was not a walk in the park for Masataka, when he worked back home in Japan after leaving Scotland with his wife, he was disappointed as some of his managers were not that enthusiastic with what he wants to do, that is creating a laborious process of producing a whisky. They were more interested in simple,  quickly-produced, and cheaply-flavored drinks which would be more cost-efficient and practical to do rather than the complex whisky he had been dreaming to do by himself. 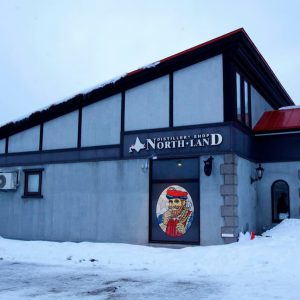 One of the buildings in Nikka Distillery in Yoichi Compound

Masataka eventually resigned from the company and was then supported for a while by Rita, who taught English to local children. News about his journey to Scotland went like wildfire, and then he got a job offer from Shinjiro Torii, the founder of another drinks company. The Taketsurus moved to Yamakazi, near Kyoto, and it was there that Masataka produced Japan’s first whisky.

Although this was a great success for Masataka, he was not happy in Kyoto. He was constantly embroiled in disputes with Torii about how the whisky should be produced, which displeased his manager. He was eventually demoted from whisky production and put in charge of a beer factory in Yokohama.

Exasperated, Masataka left the company. Once again, he was dependent on Rita’s English tuition for support.

Having so much tenacity in his heart and soul, Masataka recognized that no matter what he wants to do about his dream, he would not be able to achieve it because he did not have his own distillery. And so he decided to do the first thing first by planning to set up his own distillery, and through Rita’s connections, that most important step was made possible.

The birth of the world’s finest Nikka whisky

Rita who had been tutoring the wife of Shotaro Kaga, a successful business owner, introduced Masataka’s plans to him, and with two other investors, they agreed to back Masataka’s business.

But it was not as easy as it they thought. Because when the investors heard where Masataka wanted to set up his distillery, they almost reconsidered piggy banking on the project because Yoichi in Hokkaido, Japan’s is located at the most remote and undeveloped island. But Masataka explained and insisted that this was the only place in Japan with the barley, peat, coal, and spring water required to make proper whisky, and the investors obliged after hearing him. Then the birth of Nikka Whisky in Yoichi took place in 1934.

However, when they heard where Masataka wanted to set up his distillery, they nearly reconsidered. He had chosen Yoichi, a town on Japan’s most remote and undeveloped island, Hokkaido, as his base. But Masataka insisted that this was the only place in Japan with the barley, peat, coal, and spring water required to make proper whisky, and the investors relented. His company, Nikka Whisky, was set up in Yoichi in 1934 and began producing its first whisky in 1940. 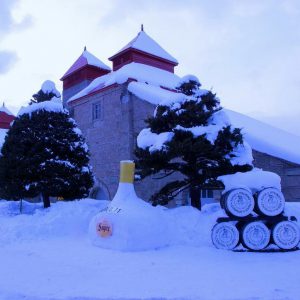 Yoichi Distillery:
Established in 1934 and envisioned by Masataka Taketsuru as perfect place for whisky-making

Many observers acknowledged that Rita was instrumental in making Masataka pursued his dream because she loyally stood up by her husband as it was not easy to embark on a venture that is something new and uncertain. But Masataka’s vision was clear, even if for others perhaps think back then the pursuit of having a whisky in a predominantly sake drinkers in Japan was a ridiculous thing to do.

Indeed, the secret to success is the consistency to purpose, and we can also deduce, true love conquers all. And this was proven by the Taketsuru couple, Masataka and Rita. Through them even if they are gone, the inspiring story of The Nikka Whisky Distilling Co. Ltd.

It is elating to note that even until death, Masataka and Rita are faithful into the solemn vow of marriage till death do us part as both are buried together in Yoichi, Hokkaido where they started the Nikka Whisky which is on its 85th year now and still counting.