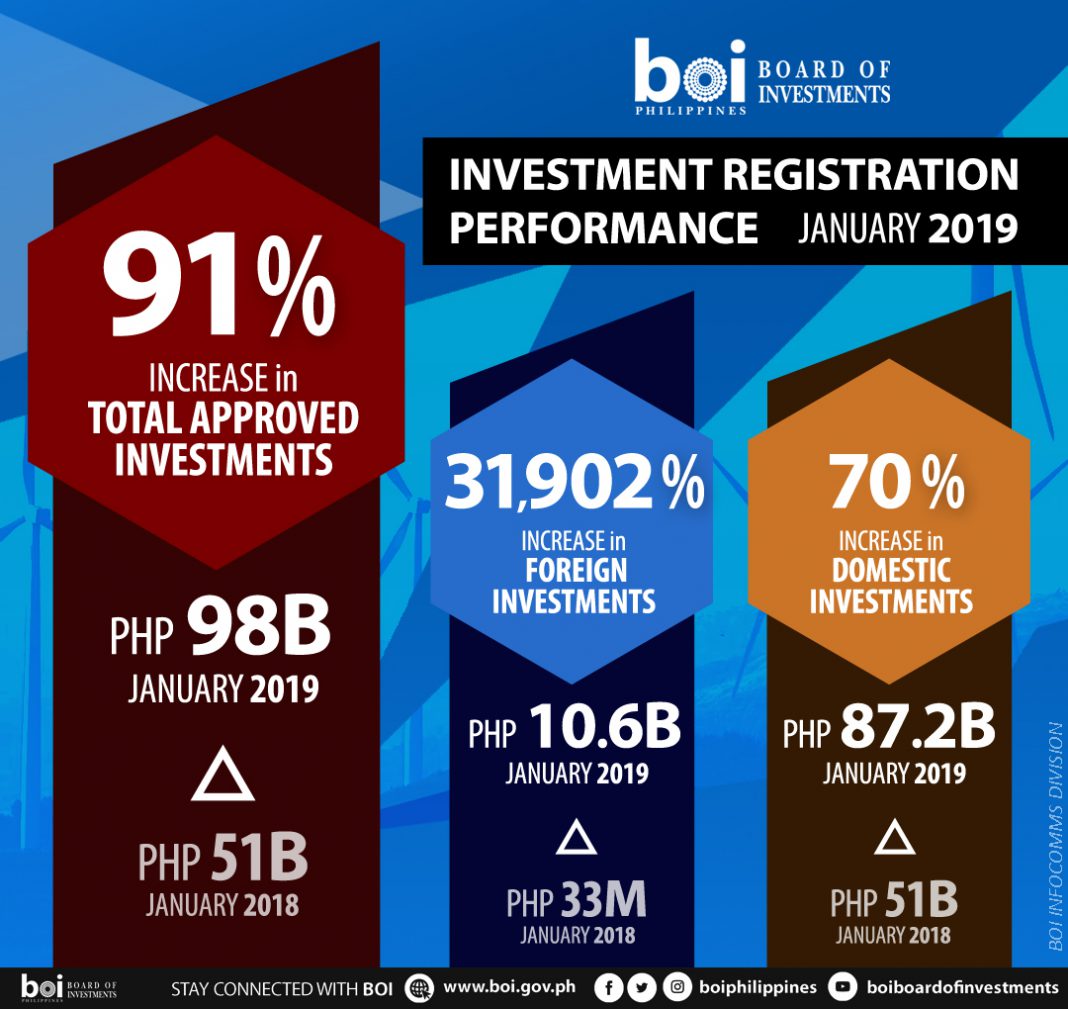 “We are definitely off to a positive start in 2019 and it augurs well for the rest of the year as we aim to cross the uncharted trillion peso mark in investment approval for the whole year,” Trade Secretary and BOI Chairman Ramon Lopez said. “Breaking a record is getting to be a habit as we aim to set a new mark for the third successive year. And given the strong and sustained confidence of domestic and international investors in the Duterte administration, we hope to make it a yearly record breaking habit until 2022 and even beyond”, he said.

The approval of power development projects, especially renewables, lead the growth in investments for the month with Php48.4 billion propelled by the approval of the 603 Megawatt (MW) Rizal Wind Energy Corp. As telcos welcomes a third player, the ICT industry got a major boost with Metroworks ICT Construction Inc., building a Php33.1 billion broadband infrastructure. With strong demand due to the infrastructure program of the government, Solid Cement Corporation’s Php12.5 billion project in Antipolo was also approved in January. The building of a new hospital worth Php849 million by Allied Care Experts in Dumaguete City gave much needed lift to address health care in the province and its nearby areas.

Approved foreign investments are up an exponential 31,903 percent to Php10.6 billion in January from just Php33.1 million in the same month in 2018. Netherlands topped all foreign investors, mainly on its investments in the Solid Cement project. Japan came in second with Php202.1 million and South Korea placed third with Php102.4 million.

“We pick up where we left off as we continue to build and expand the manufacturing base on the back of a robust national industrial policy,” Trade Undersecretary and BOI Managing Head Ceferino Rodolfo said, noting that the manufacturing industry continues to sustain its momentum from last year’s late surge with the addition of a new cement project and with  Php12.5 billion in new projects  for January, manufacturing is up a sizzling 34,559 percent from a mere Php37.3 million in the same period last year. Rodolfo further said total investments outside NCR accounted for almost 100 percent (Php97.86 billion) further boosting the dispersal of investments with the capital accounting for only Php4 million.