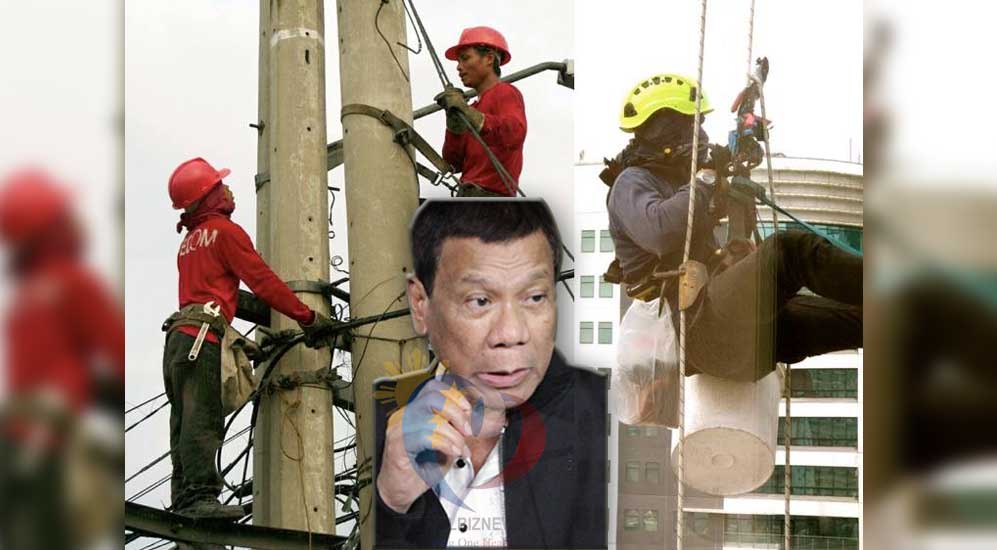 Finally, the much awaited anti-contractualization bill seems to be just a few steps away as President Rodrigo Duterte has certified the passage of the Security of Tenure Bill as urgent.

The Chair of the Senate committee on labor, employment and human resources development, Senator Joel Villanueva, released a copy of Duterte’s certification on Tuesday.

The certification was contained in the President’s letter to Senate President Vicente “Tito” Sotto III dated September 21 in which Duterte said,“Pursuant to the provisions of Article VI, Section 26 of the 1987 Constitution, I hereby certify to the necessity of the immediate enactment of Senate Bill.1826.”

The President said the passage of the bill would strengthen workers’ security of tenure “by prohibiting the prevalent practices of contractualization and labor-only contracting, which continue to immerse our workers in a quagmire of poverty and underemployment.”

Villanueva was delighted with Duterte’s move to certify the bill as a priority measure.

In his statement, Villanueva said, “We laud the move of the President certifying our Security of Tenure Bill as a priority measure. It is important that we pass this into law to finally put an end to work schemes like ‘endo’ and labor-only contracting.”

The senator noted that the practice of contractualization affects more than 1.9 million workers in the private sector.

The Senator also noted that there are about three out of 10 Filipino workers are not regular and one out of two non-regular workers are contractual. He added, “Once the anti-contractualization bill is enacted into law, the measure would remove the ambiguities in the Labor Code, which he said is the source of “circumventions.”

“We certainly need a law that will not only uphold our workers’ basic labor rights and restore dignity of work, but also a law that will promote quality employment without jeopardizing business operations but rather create more stable jobs for every Filipino,” Villanueva added.

Apart from this, Villanueva said that the measure would prohibit labor-only contracting, and provide penalties for violation; limit job contracting to licensed and specialized services; classify workers into regular and probationary employees – and treat project and seasonal employees as regular employees; provide security of tenure; clarify standards on probationary employment; and provide “Transition Support Program” for employees while they are not at work or transitioning in between jobs.