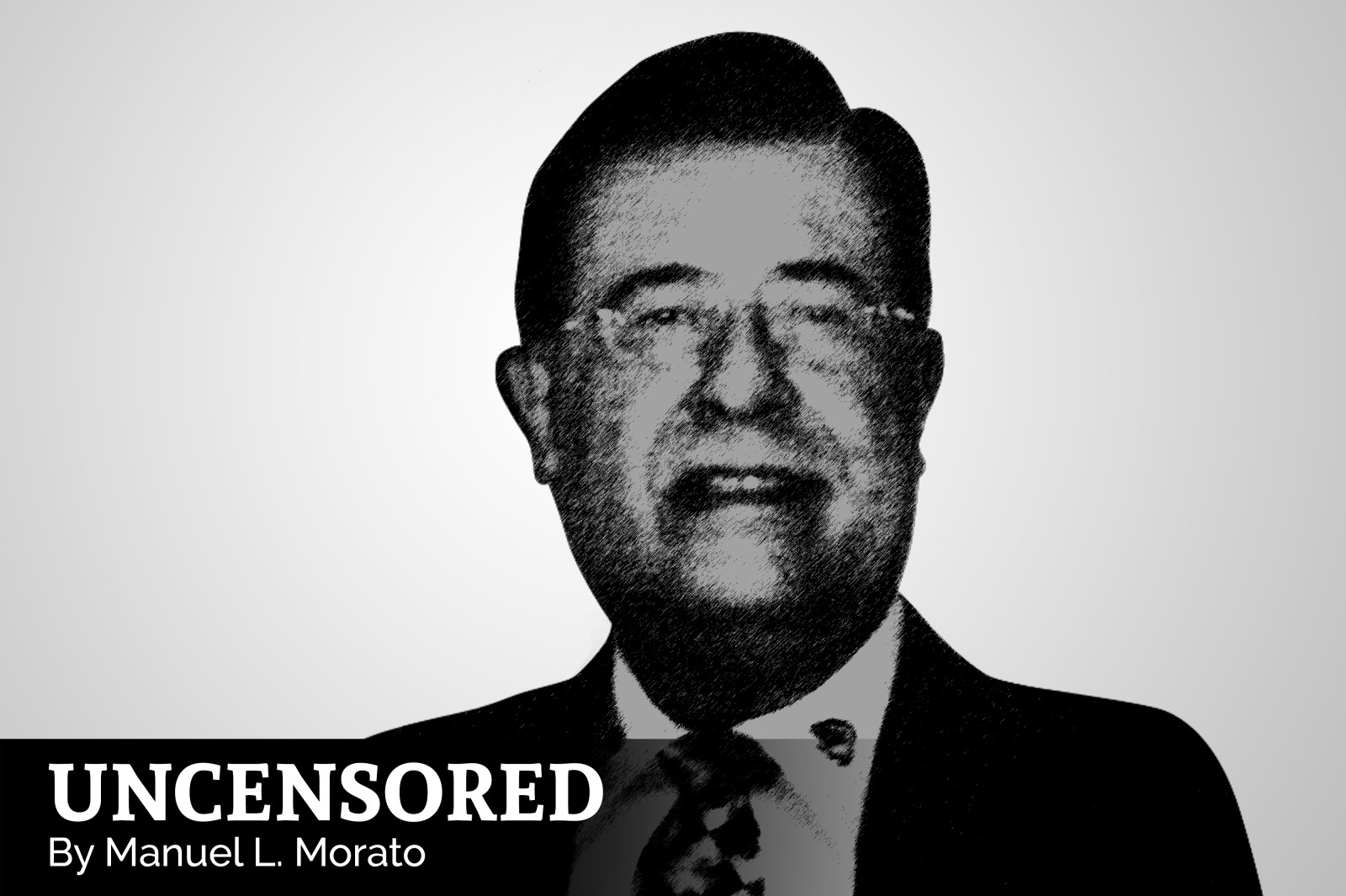 Your Honor, please allow me to explain…

For some reason or another, a case we filed in the DOJ Quezon City in the sala of Prosecutor Roderick P. Robledo, a case against Jose L. Morato, the Belmontes and Sta. Lucia Land who took over the ancestral home and three lots in the name of our late mother in our compound wherein we lived since after my father’s appointment as First Mayor of Quezon City in October 12, 1939 by President Manuel L. Quezon during the Commonwealth years.  Prior to that, we lived in a government housing along the Sampaloc Avenue, now Tomas B. Morato, constructed by the Peoples Homesite for the executives of the officials who will be appointed to run the new city, Quezon City.

We filed a case of Syndicated Estafa and Falsification of Documents with NPS Docket No. XV-03-INV-18F-05949 for “Syndicated Estafa and Falsification” in the sala of Prosecutor Roderick P. Robledo of DOJ Quezon City.  No hearing was conducted.  But on December 10, 2019, without a hearing accorded us, Prosecutor Robledo dismissed the case.  But we appealed to the DOJ in Padre Faura for review and the case was assigned to Undersecretary Neil Vincent M. Bainto.

It was wrongly dismissed, claiming we did not submit a document proving that we had furnished a copy to Prosecutor Roderick P. Robledo.  Was the ploy intentional?

Considering the timing when we received the decision of Asst. City Prosecutor Roderick Robledo in December 10, 2019, we were given a deadline of December 25, 2019.  We worked on those thick documents during the Christmas Season, just for DOJ Undersecretary Neil Vincent M. Bainto to dismiss the case through technicality based on untruthful allegation that we “failed” to furnish Prosecutor Robledo a copy of our motion to appeal his decision to the main office of the DOJ in Padre Faura.  Mr. Undersecretary, I think you are stretching things too much to the point na parang sinasakal na ninyo kami.

We produced the document from Atty. Diosdado Macapagal furnishing Prosecutor Robledo a copy on or about December 19, 2019.

In other words, despite the fact that we were all under tremendous pressure to prepare the voluminous documents regarding our appeal for review from the DOJ main office in Padre Faura addressed to DOJ Secretary Menardo Guevarra, we were still able to file on time.

The deadline fell on December 25, 2019; and we had to file by the first working day, which was December 27.

With due respect to DOJ Undersecretary Emmeline Aglipay Villar, kindly allow me to explain on behalf of my three sisters and myself.

Your Honor, Madame Undersecretary, we received your decision last December 23, 2020 at 11:05 A.M.  At least this time, we have sixty days to answer as we were told by our lawyers.

Your Honor, how come the case was decided solely on the Syndicated Estafa?  How about the falsification of documents; and there are many submitted to the DOJ Faura.

Our case against the other party is not only “Syndicated Estafa,” but on falsified documents submitted in Court which we saw for the first time under the other party submitted the Deeds of Sale between my brother Jose L. Morato (Pit) and the sons of former Speaker of the House of Representatives, Feliciano (Sonny) Belmonte.  Definitely falsified documents.  Please look into it once more, Your Honor, for they are too glaring to by-pass.  When you see them, Madame Undersecretary, you will agree for it’s very, very obvious.

Your Honor allow me to briefly answer some points:

1.  According to your decision, “the assailed Resolution dismissed the Petition for Review for failure to show proof that the complainant-appellants served a copy of the petition to the OCP Quezon City; thus, failing to conform with Department Circular No. 70 dated July ____, otherwise known as the 2000 NPS Rule on Appeal.”

Your Honor, we submitted the proof that Atty. Diosdado Macapagal served a copy of the petition to the OCP-Quezon City on December 19, and forwarded it to DOJ Faura on the deadline given us.

2.  Your Honor, I do not wish to belabor you with long answers from the Respondent-Appellees claims.  But please allow me to state that Jose L. Morato transferred the titles of my mother’s properties twelve (12) years after her death.  And we did not know anything about what was happening.  We did not know that he was capable of doing it to us.  But as I gathered later on, the Belmontes bought my mother’s properties from Jose L. Morato, illegally.  The sales were transacted among the same group of interest.

The element of surprise was bestowed upon us that led my sisters and I to find out how and why did this happen to us.

The sad part here, Your Honor, former Speaker Sonny Belmonte, his wife Betty and children I’ve known for some 40 years.

Mr. Exequiel Robles is also a friend.  He visited me twice to explain.  He told me that he was present when former Speaker Belmonte, Sonny, paid Jose L. Morato for the property of my mother belonging to the six of us.

My brother, Jose L. Morato, when I was hospitalized due to what was done to us, appointees of President Gloria to the PCSO, I suffered a heart attack and had a surgery because I was included in the cases filed by President PNoy and Margie Juico who took over the PCSO.  It was a vendetta of some kind against former President Gloria, with the idea of persecuting her.  Nadamay po kaming mga PGMA appointees sa PCSO.

We were falsely accused about the 150 million intelligence fund.  But I was only a director then for I was asked by President Gloria to help her in 2004.  I only accepted to be a director, not chairman.  It was in the term of President Fidel V. Ramos that I accepted the Chairmanship in January of 1994.

Intelligence Fund is only handled by the Chairman and General Manager.  I was PCSO Chairman during President Fidel V. Ramos’ term.  But I did not touch the intelligence fund at all.

Your Honor, Jose L. Morato was telling me stories that my sisters were telling them to leave the house of my mother after her death.

He told me so many things that I must admit that I thought he was speculating with what he was talking about.  I wrote him letters defending him, just to find out that he was trying to get me to be on his side.  He related to me that he was going to do two contracts regarding the house of my mother; one deed of sale and one donation.  He further told me that the tax on the donation was higher and he would prefer to do a deed of sale because the taxes would be much less for the property could be undervalued to pay less tax.  JLM, I thought he was just thinking out loud which to use: Deed of Donation or Deed of Sale.  That’s in reference to transferring the title of one lot to his name.

But the deed of sale was typewritten, no date, not notarized, witnessed by our old lady cook who he claimed witnessed the document signed by my mother we were all unaware of it until it surfaced in Court.  But these 2 witnesses died in 1999, or three years before my mother passed away in May 31, 2002.  How could they have witnessed?  Then JLM added two signatures of two women totally unknown to us; and not even legible.  I was told, the two women are secretaries in his office.

Your Honor, in your decision, you mentioned that we were delayed in filing the case against Jose L. Morato and his partners in crime.

It was a surprise attack, Your Honor, like a thief in the night like what criminals do when they want to commit a crime.  When we learned about it, we could not believe that we have been barricaded from entering the ancestral home; the old trees in the garden were being cut, the plants destroyed; and the house of my mother covered with net, slowly destroying an historical house for it was the house of our late father who was the First Appointive Mayor of Quezon City by President Manuel L. Quezon.

Republic Act 10066 was violated.  It is a law signed by President Gloria to preserve historical sites; that no structure 50 years and above cannot be demolished without going through the Court.

The ancestral home of our parents was over 70 years old, constructed in the 1950s by my father, a gift to my mother.

Madame Secretary, what makes things more painful is that all the estate properties of my mother inside her house, including the documents of my father and my mother were all stolen from us by Jose L. Morato.

All the things inside that house – furnitures, chandeliers, collection of my mother of miniatures from all over the world, oil paintings…etc… are all in the possession of Jose L. Morato.

Modesty aside, Madame Secretary, it pains us all to have lost all those mementoes.