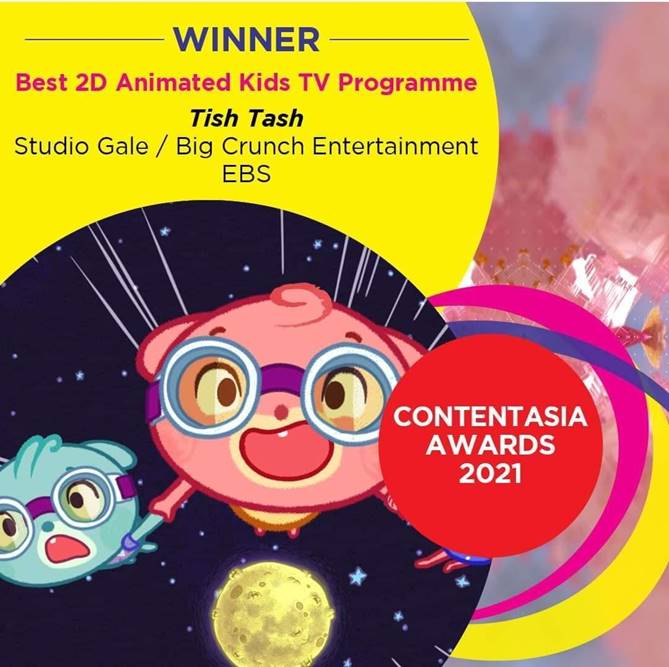 Did you know that the Philippines is one of 11 nominees in the 2021 International Emmy Kids Awards?

Yes it is and winners across three categories will be announced next week, on October 12, 9am ET (9pm in Manila).

Bringing honor to the country’s nomination to the Emmy Kids Animation category is “Tish Tash”, the animated preschool adventure show about a family of bears and their imaginary friend, also a bear. Tish Tash is a Filipino-Korean-Singaporean animated children’s television series developed by Synergy88, Studio Gale and August Media.

The heroine – 7 year-old Tish – is a young pink bear and has a larger-than-life blue imaginary friend called Tash. Together they dive into fun adventures and discover new worlds and solve problems that come their way, thanks to their fat imagination.

This is not the only time Tish Tash is earning international recognition. Only last August, it bagged the Best 2D Animated Kids TV program of the ContentAsia Awards.

The Philippines’ trade mission delegation at the conference was led by the Department of Trade and Industry-Export Marketing Bureau, Film Development Council of the Philippines, and  Department of Information and Communications Technology to promote the country’s creative industry and showcase the world-renowned animation capabilities of Filipinos in the global market.

DTI-EMB Assistant Director Anthony B. Rivera (and now Trade Representative Anthony B. Rivera of the Philippine Trade and Investment Center (PTIC) Taipei) applauds the creative minds behind the show and shares optimism that Tish Tash will continue its winning streak. “It is a proud moment for us at DTI to celebrate this milestone with Tish Tash as it continues to gain recognition in the international creative industry community. The DTI, under the leadership of Secretary Ramon Lopez, continues to pursue opportunities to develop and promote the Philippine creative industry and position the country as a major player in the global animation map,” said Rivera.

Equally proud of the news is Wilfredo C. Manalang, former Executive Director of Film Development Council of the Philippines (FDCP) that championed Philippine animation with us at MIPCOM 2018. FDCP chaired by Usec. Liza Diño, promotes the Philippines as a premier destination for new, innovative and most importantly, original works for regional and international audiences. “The executives and team behind Synergy88 is the shining example of business acumen, leadership and talent in the Philippine animation industry. They’ve been creating phenomenal animation for the global content market, and Tish Tash is one of those rare gems. I am not surprised they are getting the accolades they deserve. What makes Tish Tash extra special is the collaboration between the Philippines, Korea, and Singapore. No pun intended, global synergy is the exciting path of opportunity and they are paving the way. Bravo!” said Manalang.

Emmy Lou Versoza-Delfin, Director of DICT-ICT Industry Development Bureau gave accolades to the producers of the award-winning series, “The DICT-ICT Industry Development Bureau would like to congratulate Synergy88 for being one of the nominees for the 2021 International Emmy Kids Awards! Our hearts are swelling with pride for your achievement as it allowed the Philippines to make a mark on the global animation map. Indeed, this recognition shows how Filipino animators are truly one of the best talents in the world. The DICT is so honored to have been a part of your journey. Here’s to further supporting the Philippine animation industry!”

Synergy88  Managing Director, Jackie Chua is equally proud of the milestones achieved in such a short period of time by the series who is not only co-producer but the animation production studio of Tish Tash as well. “We were fortunate to have the opportunity to work with the DTI-EMB in the global markets such as Annecy and MIPCOM to promote fun and fantasy shows for kids aged three to five. It is the right step towards nurturing creative thinking and mobilizing the cognitive development of children in their formative years. It is with great pride to see how our hard work and dedication to the craft is given its due recognition internationally.”

Synergy88 is the same company that brought to life other award-winning animation series, such as Barangay 143, Tilda Appleseed and the first Microsoft-accredited development partner involved in popular online games, Gears of War and The Witcher: Wild Hunt.

Currently, Tish Tash is available in South Korea on linear and streaming services, on HBO max in Latin America, and most recently in the United Kingdom on CBeebies and BBC iPlayer.

Coming soon, Tish Tash will be shown on POPTV Philippines (https://www.poptv.ph/). POPTV Co-Founder and CEO Jyotirmoy Saha said, “It is a momentous occasion for POPTV to be the first to bring this award-winning show to our customers. We’re beefing up our entertainment content and I am very sure watching the family adventures of the Tish Tash bears on your POPTV screens will deepen family bonding. We want to offer  everything for our viewers – – drama, anime, romance and now pure kids entertainment.”