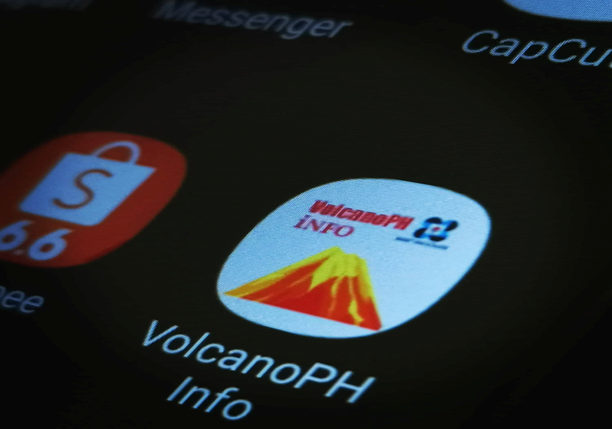 Last year, Taal volcano literally started the year with a bang. It resulted in the suspension of school classes and work and suspended local flights in the area above as the Department of Science and Technology-Philippine Institute of Volcanology and Seismology (DOST-PHIVOLCS) issued Alert Level 4 on the afternoon of 12 January 2020. The scenario indicated “possible hazardous explosive eruption within hours to days.”

After 42 years of silence, Taal volcano showed renewed activities that fateful day, spewing ash that affected residents and tourists in Batangas, Cavite, Laguna and even in Metro Manila and other neighboring cities.

Fortunately, the recent disaster has prompted scientists from DOST-PHIVOLCS to develop VolcanoPH, a volcano advisory application that will help the public understand better similar geohazard warnings in the future so they can be better prepared. This innovation is a real-time volcano advisory application, initially for Android devices, that provides infographic information on the latest updates of Philippine active volcanoes monitored by DOST-PHIVOLCS.

This app will help users understand the present volcano status along with its alert level warnings through the 24-hour real-time observation data gathered from the Volcano Monitoring Network records and actual field survey data analyzed by experts from DOST-PHIVOLCS.

App users can also select and click from a list of active volcanoes with alert levels on its homepage and be provided with the 24-hour summary containing its alert level warning status, monitoring parameters, and recommendations in Filipino language.

The push notification feature will inform the users of the latest volcano advisory before the updates are posted on social media platforms. “The system will enable the user to see the updates first on the app after we have posted it to the DOST-PHIVOLCS website and have disseminated the information to the proper authorities,” said DOST undersecretary and concurrent Officer-In-Charge of DOST-PHIVOLCS Dr. Renato U. Solidum Jr.

The information that the users can access include the following: seismicity or the number of volcanic earthquakes monitored, acidity level and temperature of the main crater lake, the level of sulfur dioxide being spewed by the volcano, volcanic plume level or the gas and particles produced by the volcano. Moreover, the app can provide other important information to help users determine the risks like the following:  ground deformation or the presence of cracks, sinking, or swelling of the ground that can be caused by gas, magma, or fluids moving underneath or the movements of the earth’s crust due to the motion along the faults.

The VolcanoPh app also provides recommendations and comments written also in Filipino. According to Ma. Antonia V. Bornas, head of the Volcano Monitoring and Eruption Prediction Division of DOST-PHIVOLCS, currently her team is planning to include advisories on different languages as warnings can be contextualized using local languages.

“Like in (province) Bicol, there are three languages used in the province,” explains Bornas. However, this is still being studied thoroughly to ensure that the app will be more effective.

To make the app more effective, Undersecretary Solidum also shared that the Agency is planning on developing the app for IOS users as well.