FIVE HUNDRED YEARS WITHOUT LOVE, a book that talks about love for our country, and hope for a better tomorrow 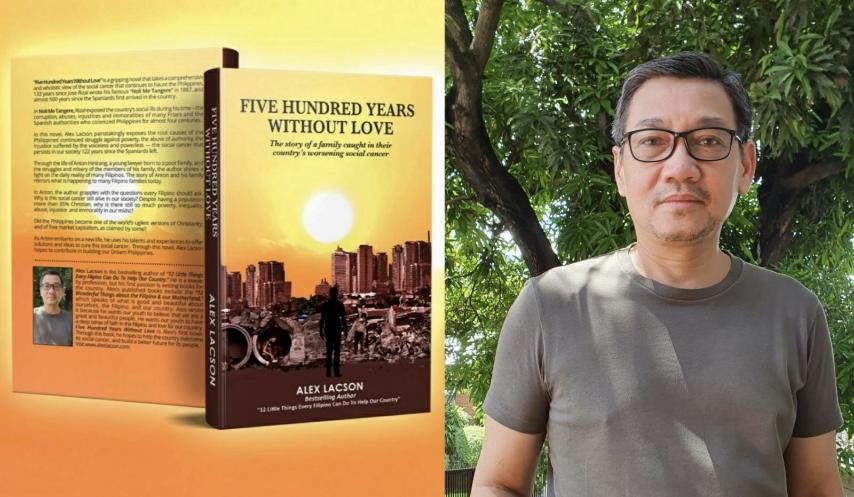 From left, the book FIVE HUNDRED YEARS WITHOUT LOVE” and author, Alex Lacson

Last August 31, the Philippines celebrated the National Heroes Day to commemorate the gallantry of our forefathers in fighting the tyrant colonizers despite lacking in arms. The  Cry of Pugad Lawin was the harbinger that the Filipinos no matter how kind and hospitable we are, will not tolerate any abusive ways that a ruler will impose, hence, it was the beginning of the Philippine Revolution by the Katipunan under the tutelage of the Supremo Andrés Bonifacio, who earn the monicker of Father of Philippine Revolution and President of the Tagalog Republic.

Turning back the pages of the history, the Philippines was first colonized in 1521 by Spain during the Spanish colonial period through Ferdinand Magellan, a Portuguese explorer sailing for Spain, and gave the name to our islands Las Felipinas, in honor of King Philip II.

Notwithstanding the hospitality of the Filipino people, it was apparent that the kindness was misconstrued as weakness, hence, the oppression started and continued for hundreds of years, then passed on to America, and later of Japan.

Filipinos are no stranger in fighting tyrants — even our very own tyrants. The very people we hoped for to represent us and fight for our own welfare has betrayed us. And that was the case of Emilio Famy Aguinaldo, who forged a deal with the Americans and relinquished us to America in the guise to end the war between the Spanish and the Americans. Hence, to the surprise of the Filipino people, the Treaty of Paris was concluded that allowed all Spanish colonies to be given up to America in the amount of 20 million without proper consultation and representation of the Filipino people.

Many observers notice that apparently history is repeating itself in the Philippines as Mainland China has been brazenly bullying us, our fishermen, and other rightful activities in our own exclusive economic zone. The most painful part of it all is when your very own Father of the country, the President who even bragged during his campaign that he will ride a jet ski and plant the Philippine flag in our own sovereign territory to assert our right and tell China that these islands belong to the Philippines.

What is disgusting and revolting, was when he was reminded about his promise to ride the jetski and plant the Philippine flag, but he refused and said it was just a joke, and only those with putrid minds would believe him for saying that. Furthermore, it was the brave Duterte, who decided to “take the back seat” on the issue of the West Philippine Sea by saying “Wala akong magagawa. Kung gusto nila kanila na yan.” (I cannot do if they like our territories, they can take it.)

The book, “Five Hundred Years Without Love” written by Alex Lacson is not just a thought-provoking title, but also revealed the author’s love for the country which all Filipinos ought to do.

Launched last August 31, National Heroes Day, the launching was unique because while it was done in a webinar format, it was very engaging as many of the guests of honors shared their own reflections about the book. It was also filled with music, and a live performance from artist Gary Granada, and moderated impeccably by Boy Abunda.

Already, Alex Lacson captured his audience with a heartfelt call to love our country more, much as he did with his first book “12 Little Things Every Filipino Can Do To Help Our Country”, which became an instant national bestseller when it first came out in 2005.

Max Soliven, the late Chairman and founder of the Philippine Star, played a key role in the success of the “12 Little Things” book. On December 15, 2005, shortly after the book’s publication, Max Soliven’s car conked out along Paseo de Roxas in Makati City during rush hours, when he was on his way to an important appointment. In a fateful meeting, Alex Lacson, who saw the stalled car in the middle of the road, stopped and offered to give a lift to Soliven. Alex didn’t recognize Max Soliven, whose Philippine Star column Lacson reads regularly. Lacson said Soliven looked different from his column photo.

Four days later, Soliven wrote a heart-warming article about how Lacson rescued him on the road. “A Filipino of Faith” was the title of the article. According to Alex Lacson, after Soliven’s article came out, his small book “12 Little Things” took off like a plane. The book sales soared. And invitations from various groups and companies for him to speak about the book shot up astronomically. In 2006 alone, Lacson received more than 300 speaking invitations to share his book’s message.

Lacson said, “it was an answered prayer. During many nights when I was writing the book, I prayed to God to send me many wonderful souls who can help me spread the book’s message to as many Filipinos as possible. Max Soliven was one of the very first of those big, wonderful souls sent by heaven to help me.”

“Five Hundred Years Without Love” is Alex Lacson’s first novel. It tells the story of the members of a poor family, who work in different sectors, each of whom suffers from the ills that contribute to the collective worsening social cancer plaguing our country. Their daily struggles, misery and reality mirror what is happening to millions of Filipino families today.

The story of Anton Hinirang and his family reflects our own story and journey as a people. It reflects the story of the Filipino in the last 500 years.

“FIVE HUNDRED YEARS WITHOUT LOVE” is a gripping novel that takes a comprehensive and holistic view of the country’s present-day social cancer, 133 years after Dr. Jose Rizal wrote his “NOLI ME TANGERE” in 1887.

In Noli Me Tangere, the Philippines’ national hero Jose Rizal exposed the country’s social ills during his time – the corruption, abuses, injustices and immoralities of the friars and Spanish authorities who occupied the Philippines for close to four centuries.

In this novel, Alex Lacson painstakingly exposes the various root causes of our country’s social malaise at present, which results in the continuing massive poverty, powerlessness and misery among the majority of the Filipino people. 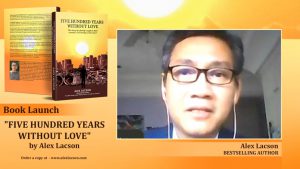 Paradoxically, those last five hundred years were a period of greed, abuse, injustice and immorality. Those were years of social cancer, when the few with the power and influence took advantage of the many who were poor, ignorant and powerless.

Five centuries when a great many Filipinos lived without dignity.  Five hundred years without love.

For almost four centuries, the Filipinos were colonized and enslaved by foreign rulers – first by the Spaniards, followed by the Americans and the Japanese. Nowadays, many of our people continue to be enslaved, by their own kind, in many political territories and corporate fences. Today, the worst enemy of the Filipino people is Filipino himself.

There is so much history of the Filipino in the novel. 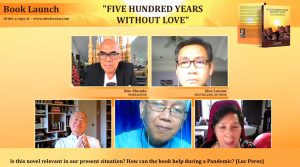 During the official launching yesterday, three speaker-reactors were invited.

Monsod said “One hundred thirty-three years later, the social ills during Jose Rizal’s time are still present, but the perpetrators are different.  They are Filipino.”

Calling the Filipino “manas na” from facing these problems everyday, Monsod said: “Alex’s novel strips us of our immunity and personalizes it so that we are made to partake of the agony that social cancer causes its victims and their loved ones. I make a fearless forecast that this book, if my reaction to it is any indication, will be a bestseller … page 11 palang eh naiyak na ako.”

Monsod noted that the human factor is a significant element in the elimination of poverty, considering that over 70% of the causes for our lack of development can be directly attributed to government policies.

Ben Punongbayan, the second speaker-reactor invited, called the book “a worthy portrayal of the country’s debilitating problems, portrayed in a manner similar to the style used by Rizal in his books published more than 130 years ago.”

He noted that our country is beset by so many big problems … “our troubles today are huge compared to those in Rizal’s time. The overriding issue we face today is that we have had ineffective government leadership.  The all-embracing reason for this ineffectiveness is that the country is being run by an oligarchy of about 100 families.”

Focusing on poverty, education and language, Mr Punongbayan then highlighted certain reforms that he felt would help uplift the condition of our country.  He noted that “we need a competent and well-intentioned government to remedy what Alex aptly describes as cancer in our society.“

Manila Archdiocese Administrator Bishop Broderick Pabillo, the last speaker, said “The book is easy reading because the language is simple and engaging but it is also hard reading … we cannot separate our personal lives from the situation of our country … we are in this situation because of social cancer that is fed by greed and self-centeredness.”

“This is the challenge to us – can we let go of our own self-centeredness noticing cancer that is eating up our own people … to go and live more simple lives and serve the poor and thus contribute to the renewal of our society?” concluded Bishop Pabillo.

“FIVE HUNDRED YEARS” was edited by Paulynn Sicam, former Commissioner of the Commission on Human Rights during the term of President Corazon Aquino. She is also a writer and editor of the Philippine Star.

As mentioned, Boy Abunda ably moderated the interesting program, while Gary Granada performed two of his most powerful songs – Bahay and Kahit Konti.

HOPE FOR THE COUNTRY

But “FIVE HUNDRED YEARS” is not merely about the social ills of our nation. It is also about hope. It also offers a possible cure or solution.

In the last portion of the book, Alex Lacson talks about “A Dream Philippines”.

It is a vision of a developed, prosperous and more humane nation that can be achieved if we can implement a package of reforms, mostly economic, which are discussed in the chapter.

Through this novel, Alex Lacson hopes to contribute to our pursuit of a Dream Philippines.  His hope is that the book will reach our youth, particularly those in Gr 9 or 10 studying the Noli/Fili, as a companion book for reflection and a call to action.

In its core, the book is about love, particularly love for the least and last. It is about brethrenhood and the common good. It is against greed, lust for power, abuse of power and position, immorality.

It is about how we can build a country with love, brethrenhood, and the common good as its foundations.

It is about how we can make the Philippines a better country, and make the Filipino great and respected in the global community – with love as our weapon.

The book is also about the author’s faith.

“If these countries were able to find their path to development and progress, the Filipinos can also find their way to a better future,” said Lacson. “We have all the essentials we need to succeed as people.”

“The first thing that we must clean up in this country is our hearts, especially the hearts of our leaders in government and in business.

“I believe that if our leaders, in government and in business, would see God in each of their fellow human beings, and discover a love for others, especially for the least and the lowly – most of our problems will go away.

“Greed is the root cause of our country’s social cancer.

“Love is the answer. Love as expressed in kindness, generosity, fairness and justice,” concluded Alex Lacson.

Books can be ordered at www.alexlacson.com