DTI steps up special monitoring and enforcement operations in NCR 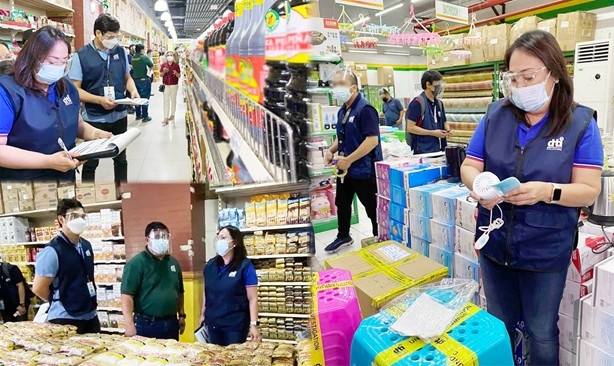 The Department of Trade and Industry (DTI) conducted a special monitoring and enforcement operations in the National Capital Region (NCR) which was done last July 12, 2021.

Consumer Protection Group (CPG) Undersecretary Ruth B. Castelo and Assistant Secretary Ronnel O. Abrenica, together with Fair Trade Enforcement Bureau (FTEB) Director Jeremy S. Marquez, led the price and supply monitoring of basic necessities and prime commodities (BNPC) in grocery stores and supermarkets in the cities of Caloocan and Valenzuela, as well as the monitoring and enforcement of product standards and technical regulations in these cities.

DTI reported that the surveyed supermarkets and groceries are following the DTI Suggested Retail Price (SRP) Bulletin. The FTEB noted that the monitoring activities were done to ensure just and fair prices of BNPCs as the 60-day nationwide price freeze due to the African Swine Fever (ASF) outbreak just ended last July 9, 2021.

Further, DTI issued three (3) Notices of Violation (NOVs) to three firms for selling products without Philippine Standard (PS) mark or Import Commodity Clearance (ICC) sticker which violate Department Administrative Order (DAO) No. 2 Series of 2007 pursuant to Republic Act 4109 or the Standardization Law of the Philippines and the Republic Act 7394 or the Consumer Act of the Philippines.

“We reiterate our reminder to everyone to be more vigilant and attentive to undue price adjustments, unconscionable sales acts, and substandard and uncertified products being sold in the market,” Undersecretary Castelo underscored.

DTI warns supermarket, grocery, and general merchandise store owners that they will be sanctioned if caught violating RA 4109 and RA 7581. To report establishments that are selling BNPCs above the SRP and firms that sell substandard items, consumers may call the Consumer Care Hotline at DTI (1-384) or send an email to consumercare@dti.gov.ph.