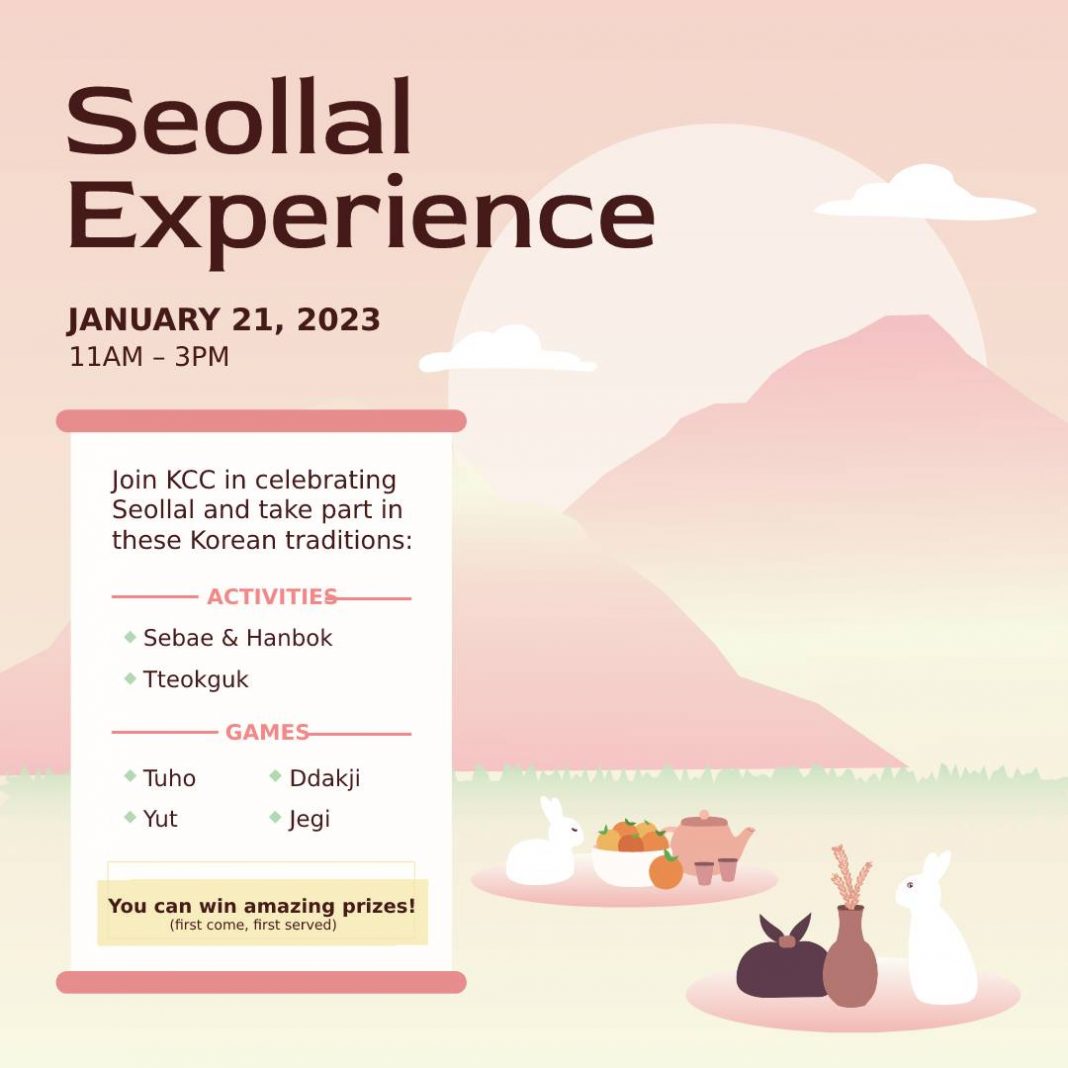 Welcoming the year of rabbit with Korean traditional games and food

It’s all about new trends, new beginnings and new experiences this new year, so hop on in the fun here this coming January 21, 2023 from 11AM to 3PM at the Korean Cultural Center, 59 Bayani Rd., Fort Bonifacio, Taguig City and experience Korean traditions, games and food!

Seollal (Lunar New Year) is one of the most important holidays in Korea where families get together. That’s why to celebrate another year of Kor – Phil friendship and relations, and to introduce Korean traditions of the Lunar New Year, we’re bringing not just one but six Korean traditional games and activities for you to enjoy here at KCC! Aside from trying out these exciting traditional Korean games and activities, you’ll have the chance to win amazing prizes! The event is open for everyone of all ages and interests, with prizes at a first come and first served basis.

You can try out for yourself traditional Korean games such as Ddakji, a game that involves flipping another player’s card, which became famous after Gong Yoo played it in Squid Game. You’ll be given the full experience of Ddakji as it’s presented in Squid Game, but minus the money.

If you’re feeling a little lucky, the game Tuho might be for your liking where you’ll throw an arrow inside a pot. It’s a game of accuracy and precision that might need your concentration skills in making sure that the arrow enters the pot.

If you’re craving to break a sweat, the game Jegichagi is your thing! It’s a game silimar to the Filipino game Sipa. The rules are clear, just kick and keep the shuttlecock in the air as long as possible!

But if adventurous is your word of the day, you might want to try the Yunnori, a traditional Korean board game that uses five different sticks. The number of the face up or face down sticks in Yunnori determines how many places you advance in the board.

As all games should be, getting a prize is part of winning a game! All participants will be given a stamp card at the entrance which you will use to complete and experience all the traditional Korean games. After playing all the games, you will do a sebae, which is a traditional Korean bow during New Year to elders! You may also do this while wearing a Hanbok, should you choose to do so. After this, you can get a chance to win amazing prizes such as a gift certificate or Korean culture items! The prizes are on a first come and first served basis until supplies last.

After the sebae, you can go to the 3rd Floor where the Cooking Classroom is located so you can get to taste a hearty bowl of Tteokguk, a rice cake soup Koreans usually eat during the Lunar New Year. In Korea, eating tteokguk means that you’ll age one year, which the infamous Korean age where Koreans add one year to their age every January 1.

What are you waiting for? Hop on now this year of the rabbit here at KCC together with your family and friends!