IPOPHL: Implementation of GI rules to strengthen protection and promotion of local products 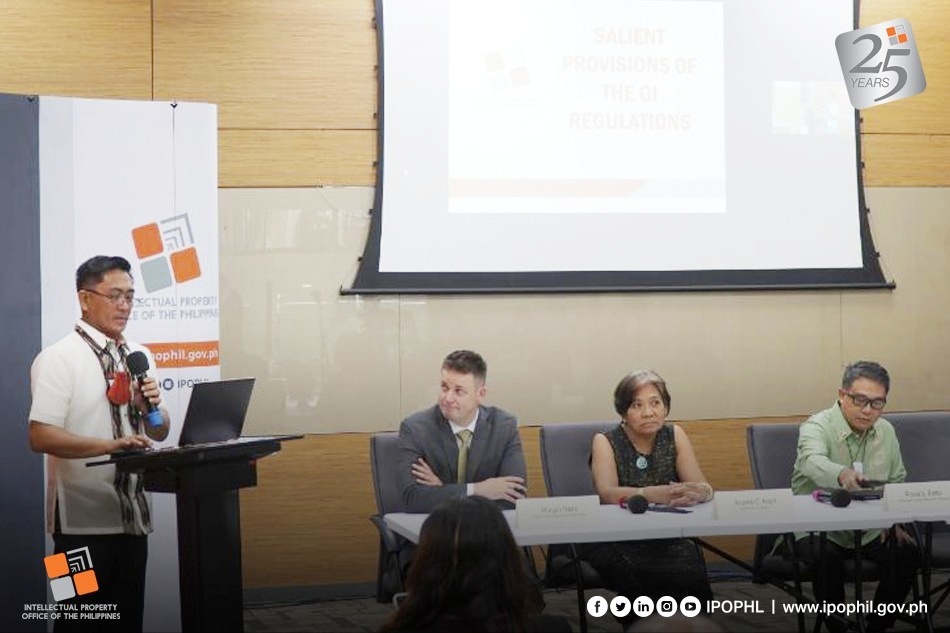 After nearly 20 years of research and multi-stakeholder consultations, the Philippines is finally putting in place a sui generis system to protect geographical indications (GIs).

This comes after the publication of the GI Rules & Regulations approved by Intellectual Property Office of the Philippines (IPOPHL) Director General Rowel S. Barba and prepared by the Bureau of Trademarks (BOT).

The new rules define GI as “any indication which identifies a good as originating in a territory, region or locality, where a given quality, reputation, or other characteristic of the good is essentially attributable to its geographical origin and/or human factors.”

The sui generis regime means local products which meet the criteria for GI protection will now have a separate registration system due to the unique ways needed to effectively protect them and fulfill the vision of the 1997 IP Code in using IP for development.

The GI regulations, according to BOT Director Jesus Antonio Z. Ros, are expected to benefit most the agricultural and handicraft sectors and promote the traditional and indigenous Philippine products.

“Sui generis GI registration in the country will accelerate, among many others, efforts to preserve our cultural heritage and identity,” Ros said.

Some of the world-famous GIs include Champagne of France, Kampot Pepper of Cambodia and Darjeeling Tea of India.

According to Barba, the GI regulations mark a breakthrough for the Philippines as the country, unlike most ASEAN members, has been missing out on the economic and cultural opportunities that GI can offer.

“The GI regulations are part of our continued commitment to the Filipino people, to protect and promote the hard work, passion and creativity that they put into these local agricultural products, foodstuffs, handicrafts, and other valuable IP products that are catalysts for our country’s economic development and global prestige,” Barba said during last week’s event to formally set the new rules in motion.

“We are now assured of stronger protection and greater value-add to world-class products that make us proud as Filipinos,” the DG continued.

The European Union (EU) also underscored the role of the new GI regime in driving inclusive growth and promoting culture.

“GIs are important means to create jobs, attract investments, draw business and support local communities in rural areas who might otherwise get left behind,” Philipp Dupuis, Head of the Economic and Trade Section of the EU Delegation in the Philippines, said, adding that a “solid legal system for the protection of GIs [will also put] real value to the cultural heritage and traditional know-how” of the country.

“In this area, the Philippines – with its rich diversity and tradition – excels, and has a lot to offer,” he said.

Dupuis noted that the GI sector contributes significantly to the EU economy, making up about 50% in the total food and drink exports alone.

For her part, Amparo C. Ampil, Chief of the Department of Agriculture’s Food, Agriculture and Fisheries Policy Division, expressed the agency’s continued support for IPOPHL’s initiative to protect local and traditional products.

IPOPHL’s BOT will be the primary implementing body of the GI regulations, including the search and examination of applications and the issuance of registration certificates.

Unlike trademarks where an application is filed by an individual or a single entity, GIs must be registered under an association of producers that are directly involved in the production, engaged in the trade of goods, and/or are in charge of regulating or protecting GIs.

A government agency or local government unit may also be a GI registrant provided that the origin of the goods is within its area of responsibility.

The regulations further indicate that the term of GI protection is indefinite without the need to renew. The registration, however, can be revoked based on the following grounds:

1)    the conditions for protection have not been fulfilled;

2)    there has been a change in the geographical origin of the goods including the natural and human factors;

3)    a court or tribunal rules out that the identified producer has no effective control over the use of the GI, standards of production of the goods and other product specifications;

4)    the registration of the GI was obtained through false statements and documents during the course of the application; and

5)    the registered or protected GI has been proven to be generic for, or a common or customary name of the goods covered in the Philippines.

The rules also provide special consideration to members of indigenous cultural councils and indigenous peoples. When found qualified, they may be granted a waiver of fees by the Director General.

The IPOPHL is now finalizing a proposed legislation to Congress to further strengthen GI protection and enforcement.

“We acknowledge that this is just the beginning of a lifetime of commitment, but we are very proud to be at the forefront of this notable endeavor that elevates our nation’s IP regime,” DG Barba added.