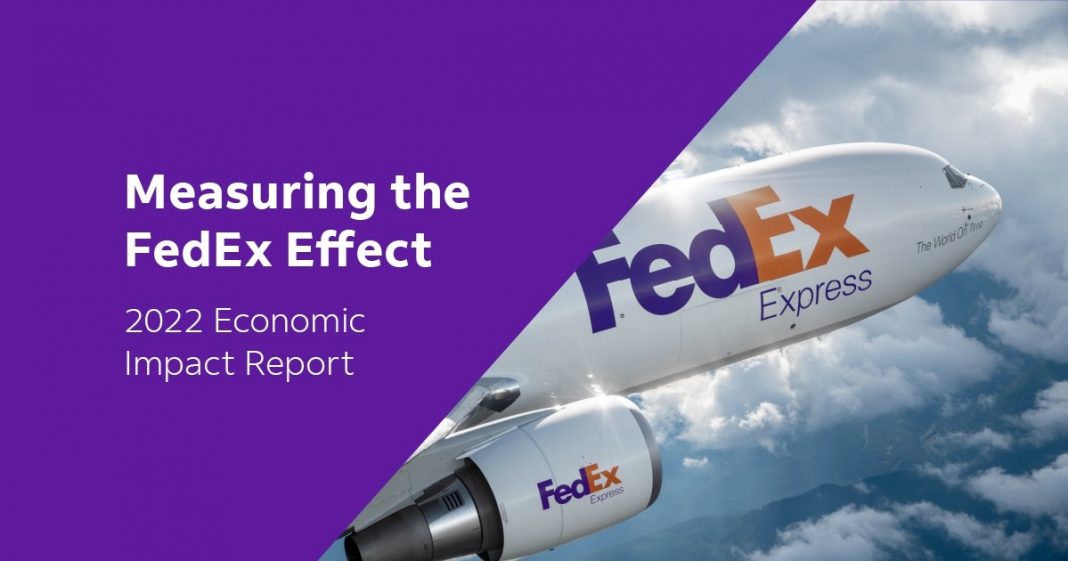 In Asia Pacific, Middle East and Africa (AMEA), FedEx indirectly contributed to net economic output worth US$3.8 billion across the AMEA region’s economy in FY22 – a 12% increase over FY21

The pandemic has disrupted the world, and business operations halted that inevitably led to logistic and supply chain and pushed the cost of good higher.

In the recent study, FedEx Corp. released the findings from its 2022 report that analyzed the company’s impact on the global economy with key regional and market-specific analyses from around the world at the conclusion of its 2022 fiscal year (FY 2022). The report, produced in consultation with Dun & Bradstreet (NYSE: DNB), a leading global provider of business decisioning data and analytics, for the first time analyzed the impact FedEx has on economies around the world. Over the past 49 years, FedEx has expanded its services to more than 220 countries and territories and invested in a global network enabling businesses of all sizes to access and grow the global economy.

The report found that FedEx played an integral role in helping businesses recover from the pandemic while overcoming strained supply chains and economic challenges. With nearly 550,000 employees worldwide, FedEx moved an average of 16 million shipments each day through its 5,000 facilities in FY 2022. The company’s network optimization and investments improved efficiency and capacity for FedEx customers.

“All around the world, FedEx helped individuals, businesses, and communities emerge from the pandemic by moving goods and providing services that connect us and power the global economy,” said Raj Subramaniam, President and CEO, FedEx Corporation. “The report illustrates the ongoing and important work we do every day, including supporting small- and medium-sized businesses which are the backbone of our local communities. We call this, the ‘FedEx Effect.’”

The shipping and logistics company plays a role in fueling innovation, creating, and supporting local jobs, as well as helping lift individuals and their communities regionally and in major markets around the world.

The company’s presence in Asia, the Pacific, the Middle East, Indian Subcontinent and Africa serves more than 100 countries and territories in a highly inter-connected region that is playing an increasingly prominent role as a driver of global trade. To support the region’s economic recovery from the COVID-19 pandemic, FedEx made strategic investments, as outlined in the report, that contributed to a 13% increase in employment, supporting more than 58,000 jobs beyond its 37,000 team members in the AMEA region.

“Through our continuous commitment to the region we have helped support hundreds of thousands of businesses and communities still recovering from the pandemic,” said Kawal Preet, regional president, Asia Pacific, Middle East, and Africa (AMEA), FedEx Express. “Our investments in our hubs in Guangzhou, Osaka and Dubai enable us to meet demand and optimize routes for our customers as supply chains fluctuate. Our new and improved facilities like the Clark gateway facility in the Philippines, as well as the consolidation at our Delhi hub creates greater access to emerging markets and increases efficiency.”

FedEx economic footprint in the region continues to grow.

FedEx is committed to diversity, equity, and inclusion in the workplace, an important contributor to recent accolades including ranking on the World’s Best Workplaces list compiled by Fortune magazine in 21st place and being named as one of the best places to work in markets in AMEA including Indonesia, the Philippines and Thailand. In October 2021, Kawal Preet signed the CEO statement of support for the Women’s Empowerment Principles established by the United Nations Entity for Gender Equality and the Empowerment of Women and the United Nations Global Compact.

The report shows that in FY 2022, FedEx donated over $86 million globally to charities and local non-profits in the communities where its team members live and work. In the AMEA region this includes environmental programs, childhood education, entrepreneurship, and healthcare initiatives to help improve lives. The company also served as a critical conduit for food aid deliveries to residents in Shanghai, China during COVID-19 lockdowns in the city and delivered vaccines and critical medical supplies to India, Korea, and Vietnam among others.

FedEx is committed to connecting the world responsibly, through its stated goal of carbon-neutral operations by 2040 and pursuit of investments in renewable energy to power its operations.

Read the full FedEx Economic Impact Report and explore the FedEx Effect in communities and regions around the world.