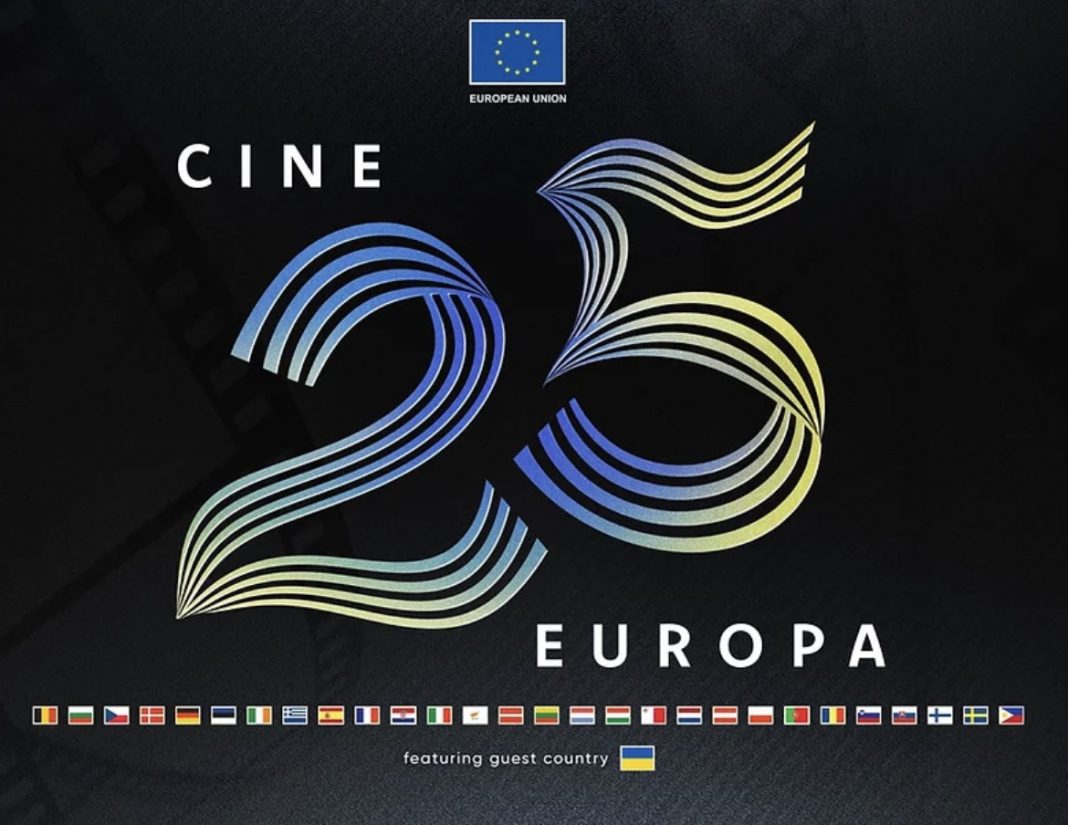 The Delegation of the European Union to the Philippines and the EU Member States Embassies, together with Cultúr Éireann, Irish Film Institute, Goethe Institut Manila, the Philippine-Italian Association, and Instituto Cervantes de Manila, are proud to present Cine Europa 25 from 15 September to 30 October 2022.

Dr. Ana-Isabel Sanchez-Ruiz, Deputy Head of the EU Delegation to the Philippines, will do the honour of opening the film festival on September 14, 2022 in SM Seaside, Cebu City.

“Film is deeply rooted in Europe’s culture which we are very proud about. It mirrors our identity and speaks a lot about our heritage and what we are”, said Dr. Sanchez-Ruiz.

Cebu has been one of the pioneer host cities of the film festival when Cine Europa was brought outside Manila in 2001.

For the past 25 years Cine Europa has been the hallmark cultural event of the European Union Delegation to the Philippines. Beyond showing European films, this programme has become a platform to strengthen EU-Philippine cultural relations and collaboration with Philippine cultural institutions and other partners.

With the COVID-19 pandemic easing up, the silver anniversary edition of Cine Europa will follow a hybrid format, opening doors both physically and virtually to every Filipino, while endeavoring to ensure the safety and health of everyone.

On its silver year, Cine Europa brings a whopping 30 films from 15 EU Member States for FREE! These films may be watched onsite in select venue partners in Cebu City, Metro Manila, Iloilo and Palawan, or online upon signing up at www.cineeuropaph.com.

The EU Delegation thanks its constant and valuable venue partners such as SM Cinemas and SM City Cebu Seaside, hosts this year to the festival’s opening, the Film Development Council of the Philippines , and the National Parks and Development Committee, and the Cultural Center of the Philippines, which will feature Cine Europa films in their indoor and outdoor venues.

The EU Delegation, the European Union Member States Embassies together with Cultúr Éireann, Irish Film Institute, Goethe-Institut, Instituto Cervantes de Manila and the Philippine-Italian Association, have curated a set of award-wining films showcasing different genres that will attract every viewer, with a particular emphasis this year on youth in celebration of the European Year of Youth 2022, and with the guest participation of an Ukrainian film in solidarity with Ukraine and its people, victims of an illegal war of aggression and invasion by Russia.

The launch film for Cine Europa’s Silver Anniversary comes from Cyprus and Greece, entitled “Páfsi (Pause)” set to first be screened on 14 September at 6:00pm.

Páfsi (Pause)” is a dramatic film that focuses on a middle-aged woman and her fantasy world that she uses to escape her real world misery. But what happens when the lines between fantasy and reality start to blur? Directed by Tonia Mishiali a Cypriot whose work focuses on women’s and social issues.

The other films in this silver anniversary edition are:

Sanremo a co-production between Slovenia and Italy. Another dramatic film that will tug on your heartstrings. This film revolves around Bruno, his condition that causes him to forget, Duša and Gigliolia Cinquetti’s song “Non ho l’età”

Libertad (Freedom), from Spain, a film about friendship and how two different people from different places and different lives can create a unique friendship.

Mysi Patri Do Nebe (Even Mice Belong in Heaven) a co-production of the Czech Republic, France, Slovakia and Poland. The only animated film in this year’s roster of films. This film focuses on unlikely friendships that stem from enemies but in turn become inseparable friends

Kapsalon Romy (Romy’s Salon) is described as a well-made, inter-generational film full of tenderness when dealing with the nature of the disease. Directed by Mischa Kamp who won the Golden Calf Award for Best Director in the Netherlands Film Festival. It is a co-production of the Netherlands and Germany

From Ireland is the film, Bicycle Thieves: Pumped Up, a comedy about a hot-headed pizza delivery cyclist. This film is described to be part investigative thriller, part heist and part magical-realist action comedy. Promising a wild ride from start to finish.

Nematoma (Invisible), a film from Lithuania, Latvia, Ukraine and Spain a drama that has dancing, deception, and revenge. The choreography of this film is described to be as important as the script.

Lola Vers La Mer (Lola), a film from Belgium and France, winner and multiple nominations of the Magritte Awards from the Académie André Delvaux of Belgium, which recognize cinematic achievement in the film industry.

Aatos Ja Amine (Gods of Molenbeek) from Finland, Belgium and Germany, a documentary that is described to look at area deprived neighbourhood in Brussels at knee’s hight or through the eyes of children.

Las Niñas (Schoolgirls) from Spain, a multi-award winning drama that focuses on two girls that form a friendship, and their lives in the 90s. Director Pilar Palomero has said that during filming she and her actresses felt like girls again

Marina is a Belgian biographical film that is based on the life of Italian Singer Rocco Granata who moved to Belgium when he was young.

From France is Un Triomphe (The Big Hit), a comedic story of Etienne, an actor who runs a theatre workshop in a prison and brings together an unlikely troupe on tour with a final performance in Paris

Seltsimees Laps (The Little Comrade) from Estonia is a children’s film that shows Leelo, a six year old that is separated from her mother and vows to be on her best behaviour in the hopes of bringing her mother back.

Dating Amber, an Irish film set in the mid-90’s, is a love letter to all the kids who grew up in a small town and who needed to escape in order to find or be themselves

Tytöt Tytöt Tytöt (A Girl Picture) from Finland a coming-of-age film released in 2022, nominated in multiple International Film Festival and a winner in the Sundance Film Festival

Nech Je Svetlo (Let There Be Light) from Slovakia and the Czech Republic is a drama about Milan, his teenage son and his journey to find the truth about what happened and about himself

Oskar & Lilli – Ein Bisschen Bleiben Wir Noch (Oskar & Lilli – Where No One Knows Us) from Austria is described as a bittersweet odyssey about how Oskar and Lilli Chechen refugee kids and the many ways of perceiving the world to survive.

La Vita Facile (Easy Living) from Italy a comedy about a young woman, a bizarre American and an Illegal immigrant set between the French and Italian Boarder

Bashtata (The Father) a co-produced film from Bulgaria and Greece is a comedy about Vasil, his son Pavel and their journey with the loss of Ivanka, Vasil’s Wife and Pavel’s mother.

Never Gonna Snow Again from Poland described as a dark fairy tale about a masseur who hails from the East and enter the lives of residents in a walled off community, going door-to-door to heal these residents using his hands

Im Feuer (Sisters Apart), co-produced by Germany and Greece, is about a German soldier and native Kurd who volunteer to train female Kurdish soldiers in Iraq to fight ISIS with a hidden personal agenda

Exil (Exile), a German filmfrom Director Virar Morina, describes the importance of the protagonist’s personality as he integrates into a new society.

Klondike from Ukraine, described as an angry war film about a Ukrainian family living on the boarder of Russia and Ukraine as their village gets taken by armed forces, and an international plane crash in 2014.

The Most Beautiful Boy in the World, from Sweden, is a documentary set in 1970 as filmmaket Luchino Visconti travelled Europe looking for the perfect boy to personify absolute beauty.

Luzzu from Malta, a drama about a Maltese fisherman and his wooden luzzu boat focusing on his livelihood and family traditions from generations before him

Sluzibnici (Servants) a co-production between Slovakia, Romania, Czech Republic and Ireland, is a film about Michal and Juraj, students at a theological seminary in Czechoslovakia, and their story as the possibility of dissolution of their school looms over them.

Krajina Ve Stinu (Shadow Country), a co-produced film from the Czech Republic and Slovakia, is a fictional tale about killings, a growing evil and the roles of humility and hope in one’s life.

The Spiders’ Man, from Italy, is a dark comedy about two half-brothers and their American friend and their encounter with a group of inexperienced thugs.