Experience Korea in the Philippines at ‘KITA KITA KOREA’ 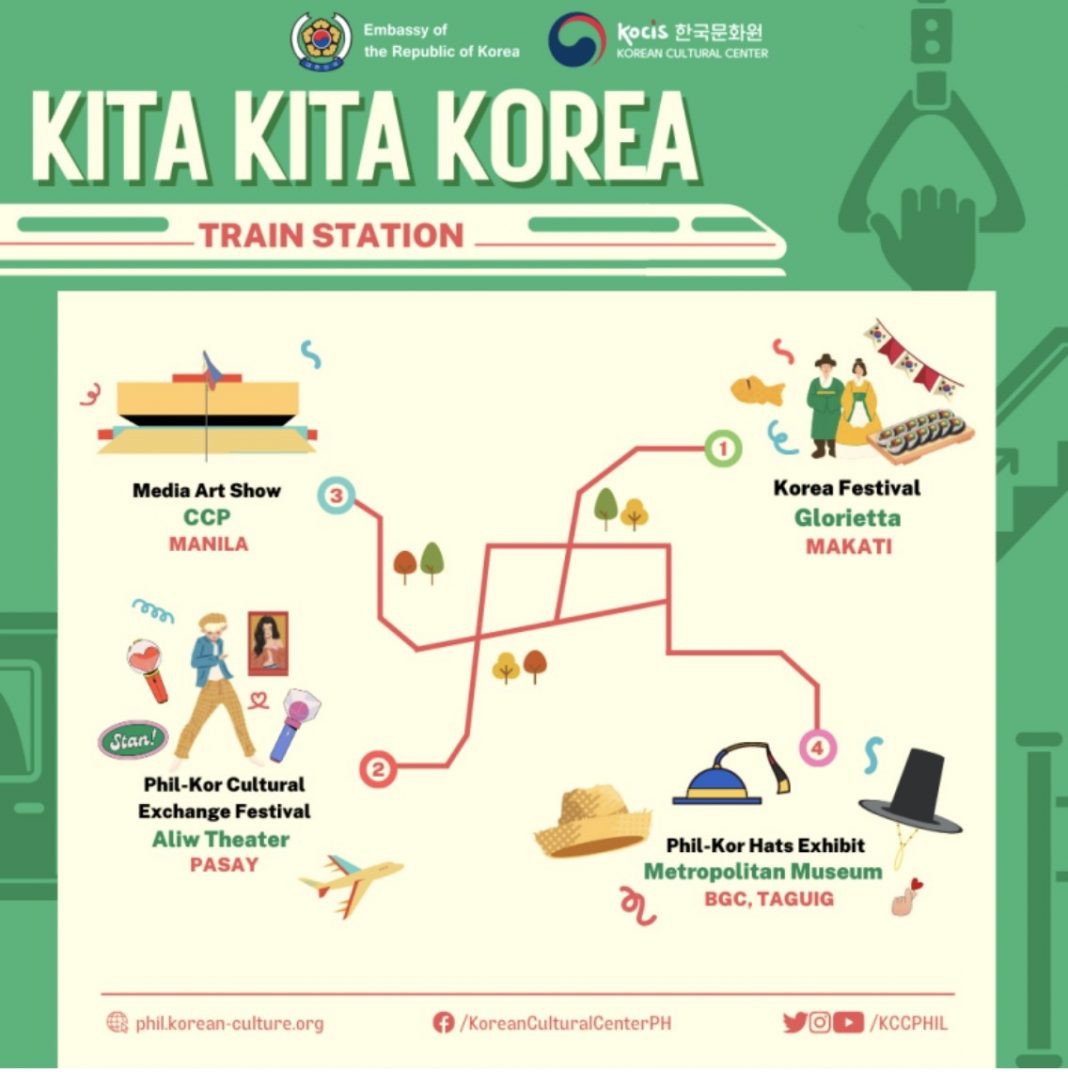 Get your swimwear ready this rainy season because you’ll surely drown with all the surprises to offer this year! Headline by the theme “Kita kita Korea”, everyone will get the chance to see, feel and experience Korea in the Philippines through different projects and events from the Korea Festival on September 10 – 11, 2022 up to the Phil-Kor Hats Exhibit on October 14.

Hosted by the Korean Embassy, the Korean Cultural Center (KCC) and the Korea Tourism Organization (KTO), the Korea Festival will be held in the Glorietta Activity Center and Palm Drive Activity Center from September 10 – 11, 2022. As Chuseok, the Korean Thanksgiving Day, is celebrated on the same day, K-Culture stans, non-stans and even those who are just purely curious can experience authentic traditional Korean Culture here in the Philippines! Even without going to Korea, Filipinos can experience and feel Korea and Chuseok firsthand in one of the busiest cities in the metro! You can make songpyeon (Korean half-moon rice cakes) which is a traditional Korean food that’s a symbol of Chuseok, and also try out and be part of Ganggangsullae Flash Mob Traditional Performance, a UNESCO Intangible Cultural Heritage folk play culture that’s performed to wish for a prosperous harvest during Chuseok. Don’t miss out as well the traditional Korean taffy seller roaming around the activity center, and the makgeolli (Korean rice wine) and the jeon (Korean pancake) from the jumak (Korean Traditional Pub)! Be sure to call the taffy seller’s attention and try out the yeot (Korean traditional taffy).

Aside from experiencing Chuseok firsthand, you can also check out performances such as The Painters, which is an innovative non-verbal performance that stages the entire process of painting with visual effects and a witty blend of dance, comedy and mime, and Super Stick, a group of Traditional Korean drum performers that will make your hearts beat loud together with their drums! Learn more about Korean cuisine, and cook japchae (Korean stir-fried glass noodles and vegetables) with Chef Sharwin Tee. Talented Filipino acts and celebrities such as Kyline Alcantara, Mona, Z2Z, VXON and KAIA will also showcase their skills on the main stage! K-pop star Soyou, formerly of SISTAR, will shake it on the main stage and sing her hit songs to her Filipino fans!

Get a chance to visit Hangang Park, Dongdaemun or Myeongdong here in the Philippines by having a taste of authentic Korean food from Kaya and K-mall! Eat a wide selection of food from chimaek (Korean fried chicken and beer), tteokbokki (Korean stir-fried rice cakes) and sundae (Korean sausage) with your friends and family members on picnic mats just like how Koreans do! Get a chance to try the Ramyeon (Korean instant noodles) machine that automatically cooks your ramyeon for you, which is a trend nowadays in Hangang Park.

These are not all the activities that await you on September 10 and 11 as you can also join the Korea Travel Organization’s Korea Travel Quiz, the OX quiz, different traditional games, and even Korean calligraphy!