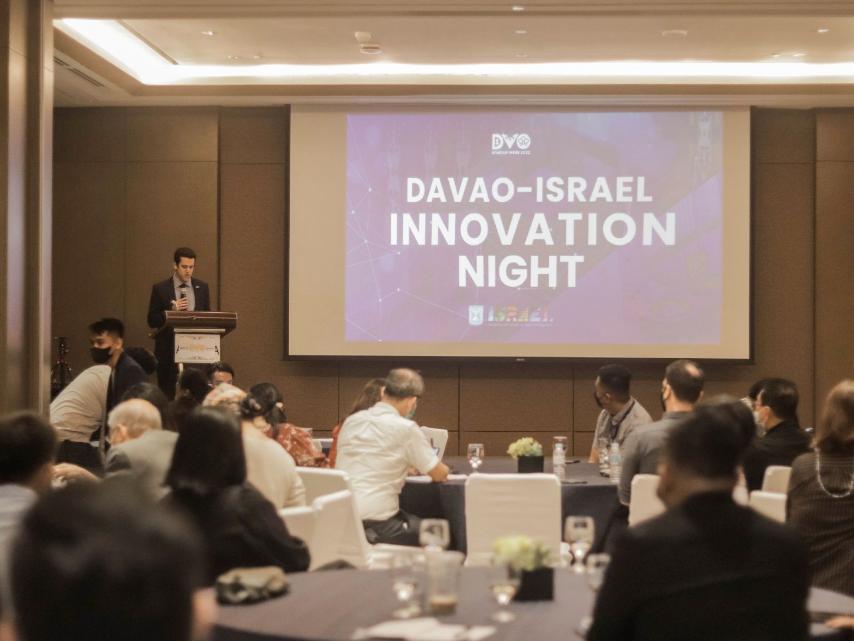 In photo: Deputy Chief of Mission of the Embassy of Israel Mr. Nir Balzam

Last June 20, no less than Israel Ambassador to the Philippines His Excellency Ilan Fluss, graced the launching of the country’s first globally-accredited cyber school, CybersCool Defcon to bridge the gap in cybersecurity and enhance the skills of Filipino. Ambassador Fluss vowed to pursue to build bridges of innovation and technology between the Philippines and Israel.

True to its commitment to build bridges of innovations between Israel and the Philippines, the Embassy of Israel, in partnership with the University of the Philippines (U.P.) in Mindanao and IDEAS Davao, hosted Davao-Israel Innovation Night in line with the first-ever Davao Start-Up Week.

Israel is known as a Start-Up Nation, which houses over 9,000 startups. “We are happy to share our success stories, especially with the Philippines. Filipinos are talented individuals; they find solutions despite limited resources. I believe that with stronger support for innovation and start-ups, many more can be achieved,” Israeli Deputy Chief of Mission Nir Balzam said.

Davao-based start-ups joined the event and were given an opportunity to pitch their ideas to local investors and government officials. “We are still working on connecting more with the industry, building more engagement to have Filipino start-ups collaborate with Israeli start-ups,” Mr. Balzam added.

Vice President for External Affairs of the Israel Chamber of Commerce of the Philippines Mr. Itamar Gero shared his insights on the Startup Ecosystem partnership between the Philippines and Israel. Also in attendance at the event were Executive Director of DOST-PCIEERD Dr. Eric Paringit, Project Lead of IDEAS Davao Mr. Miguel Guillermo, representatives from government offices including the Department of Science and Technology (DOST), Department of Information and Communications Technology (DICT), National Economic and Development Authority (NEDA), representatives from the local government units of Davao City, and the Chamber of Commerce.

The Embassy of Israel actively builds bridges of innovation with the Philippines by collaborating with the government and private sectors. In June 2022, the Department of Trade and Industry (DTI) signed an agreement with the Israel Innovation Authority for joint collaboration on innovation. The agreement will foster the formation of collaborative prospects in the field of innovation between Israel and the Philippines. In April 2022, the Embassy hosted in Israel a Filipino delegation headed by DOST with their incubators and representatives from DTI, the Department of the Interior and Local Government (DILG), and the United Nations Development Programme (UNDP) to learn about the innovation ecosystem in Israel and to see what can be applied in the Philippines.

The Davao Start-up Week will run from the 12th to the 14th of August.