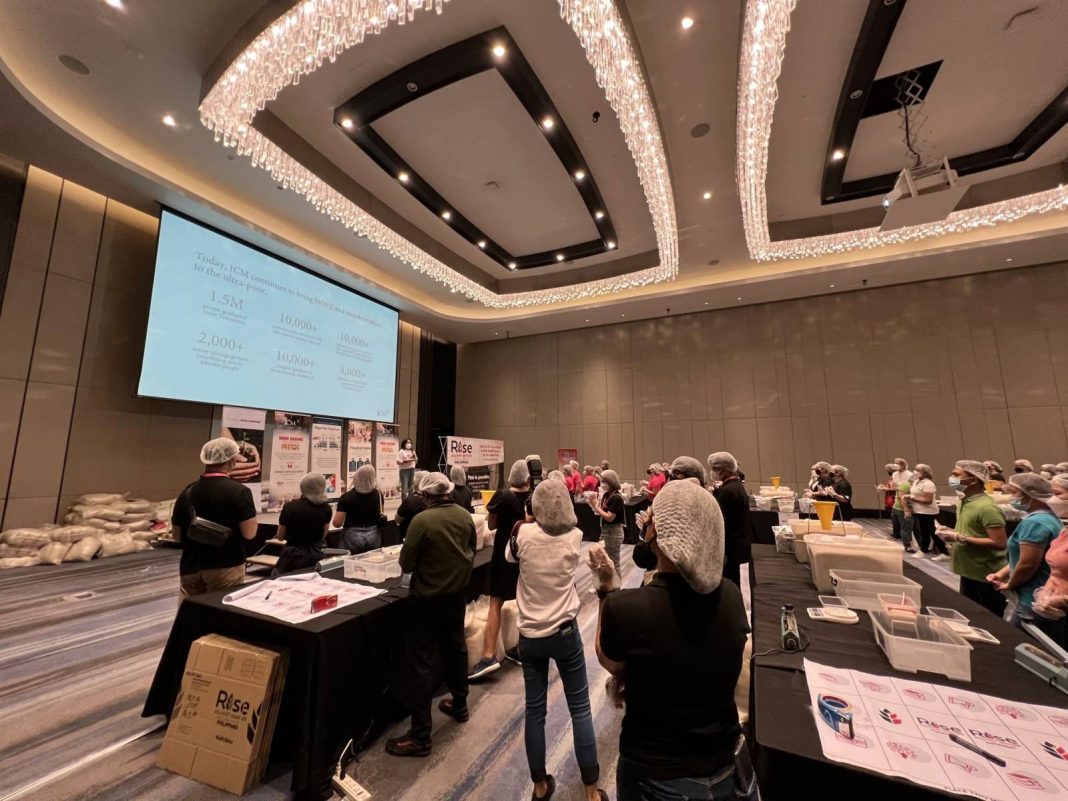 International Care Ministries (ICM) rallied over 400 volunteers at the Conrad Hotel on July 14, 2022 to assemble 16,000 meal packs for families living in ultra-poverty in Visayas and Mindanao. Hope Begins with a Meal is ICM’s biggest meal-packing volunteer activity to date, done in partnership with Rise Against Hunger Philippines and Conrad Manila.

Over 26 million Filipinos live in poverty, 11 million are in extreme conditions, and seven million struggle to survive in “ultra-poverty” at the absolute bottom with incomes below Php 22 per day. They live in remote and hard-to-reach areas or in the deepest of the urban informal settlements. ICM is a Filipino non-profit organization working with such communities in Visayas and Mindanao. Meal-packing events like Hope Begins with a Meal is one of the means that ICM helps families in ultra-poverty have enough to eat each day.

Nutrient-rich meals for those who need them the most

“Our goal is for ultra-poor families to have a good day each day,” Weng Kakila, ICM’s Senior Director for Donor Relations shared to the hundreds of volunteers who came, eager to start with the work. Most families ICM works with don’t have enough to eat everyday and most children suffer with malnutrition.

A meal pack is formulated to meet the nutritional needs of malnourished children. “ICM has been providing these meals to all malnourished children enrolled in our Home-Based Feeding activity under the Transform Program — ICM’s core poverty-alleviation program,” ICM’s Senior Health Director Dr. Ellaine Joseph explained. Combined with therapeutic food, ICM’s intervention for child malnutrition has been achieving target cure rates of 80% or higher.

Each ready-to-cook meal pack contains vitamins, minerals and other nutrients with a blend of rice, dehydrated fruits or vegetables and protein-rich soy nuggets. Rise Against Hunger Philippines’ rice and soy fortified meal packs come in four flavors especially made for the Filipino palate: beef congee, arroz caldo, ginataan, and champorado.

Hope and healing for malnourished children

Seven-year-old Jasmin belongs to an ultra-poor family. When ICM found her, she was severely malnourished, scrawny, and had sores that were left untreated. Since she was five, Jasmin was regularly sick.

Living in ultra-poor conditions, food is often scarce for Jasmin and her four siblings. Their staple is instant noodles. Her mother does laundry work, while her father is a construction worker. Lack of basic nutrition has led to Jasmin’s condition.

Before the ICM health staff examined Jasmin, she had never seen a doctor. Thankfully, ICM provided her and her siblings with ready-to-cook rice-soy meal packs through its Home-Based Feeding initiative. She underwent 19 weeks of feeding with specially formulated meals. Today, Jasmin has steadily gained weight and is enjoying better health.

Jasmin is only one of millions of children in ultra-poor conditions suffering from many forms of malnutrition. ICM endeavors to bring them hope and healing through these meal packs.

Coming together to help

Volunteers at the meal packing came mostly from ICM’s corporate partners such as the member organizations of the Healthcare Information Management Association of the Philippines (HIMAP) that include Conduent, Point West, and Tenet Global Business Center. Many of them came from their early morning shifts at work, showing up at 9:30 AM for the first shift of the 12-hour event. Conrad Manila staff spent their breaks packing meals, including their Director of Operations Yogeswaran Veerasamy and Executive Chef Warren Brown.

ICM’s Board of Advisers came with friends and family to volunteer in the afternoon shift. Members of different churches such as Christ’s Commission Fellowship and Greenhills Christian Fellowship also participated.

The boxes of meal packs were shipped to the 12 ICM bases in the provinces of Visayas and Mindanao immediately after the event. They are distributed through ICM core program Transform, a 4-month training program that equips ultra-poor families with the knowledge and confidence they need to create lasting change in their lives.

There are many other ways to be part of ICM’s work. To learn more about ICM and to donate to its work, visit http://caremin.com.