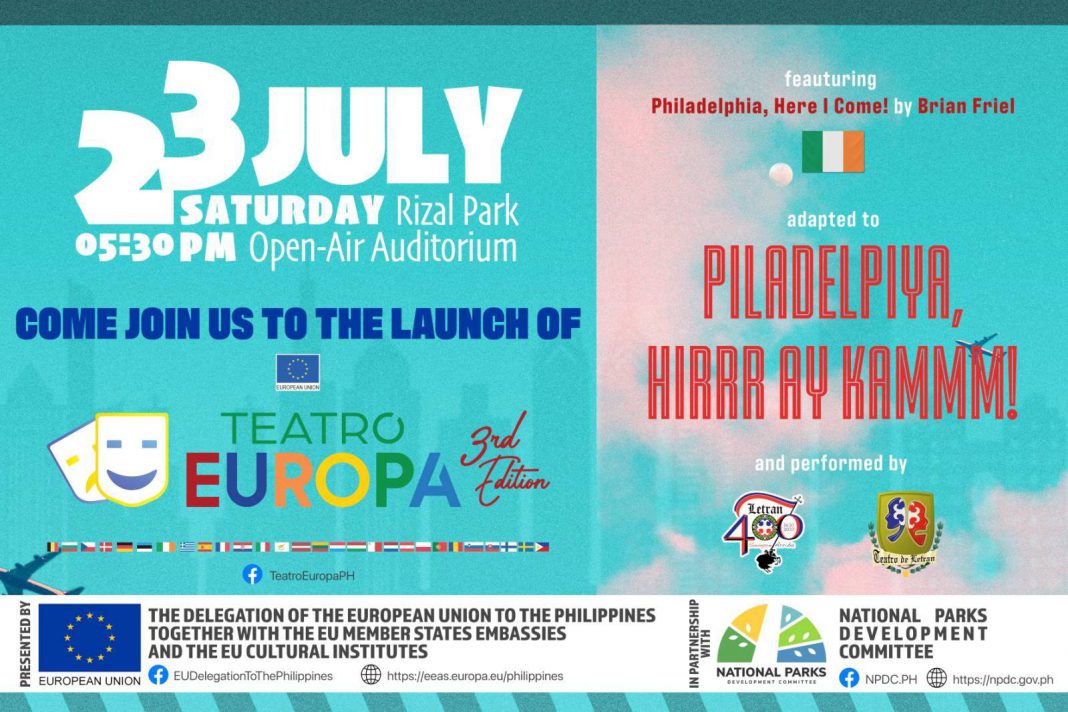 The first ever European theater festival in the country with a focus on classic and contemporary pieces from various European Member States will now be a mix of virtual and physical performances.

The European Union Delegation to the Philippines, together with EU Member States, its cultural institutes and partner Universities proudly opens Teatro Europa, the Third Edition, on  23 July at the Rizal Park Open-Air Auditorium. The Irish play, “Philadelphia, Here I Come!” by  Brian Friel is the featured opening performance by Teatro de Letran of Colegio de San Juan de Letran. Friel’s play is a tragicomedy that centers around Gareth O’Donnell’s move to  Philadelphia (US). The comic story is transposed to several circumstances in the Philippines.

This theatre festival brings out the best talents from the Filipino youth as they get immersed with the European culture.

The EU Delegation is proud that this event continues to promote cultural exchange as the European Union celebrates the European International Year of the Youth this 2022.

Virtual and physical performances will run from July 23 to 20 August where audiences will witness universities’ interpretation of carefully-curated pieces with re-runs from August 22 to September 5.

This year, eight (8) performances will be performed on-site while ten (10) will be staged online and seven (7) performances live streamed in the official Facebook Page of Teatro Europa  @TeatroEuropaPH.

With 18 universities nationwide (11 from Luzon, 3 from Visayas and 4 from Mindanao), Teatro  Europa is bringing across the country the finest talents who are bringing to life never-before staged theatre plays.

This year, the following theater groups with their performances pieces include:

2. Colegio San Augustin’s Kanlaon Theater Guild – The Elegance of the Molecule by  Petr Zelenka of the Czech Republic

5. Xavier University – Ateneo de Cagayan’s The Xavier Stage – A Matter of Husbands  by Ferenc Molnar of Hungary adapted to Give me back my Husband!

15. University of the East’s UE Drama Company – Cutting a Cake by Christoffer  Mellgren of Finland

The EU Delegation to the Philippines is glad to have these universities on board as collaborators and it is grateful to venue partner, the National Parks Development Committee which is the venue for the official launch of Teatro Europa2022.